A gay group of employees from NBC will march in next year’s New York City St. Patrick’s Day Parade behind their own banner, a source with knowledge of the ongoing parade controversy has told the Irish Voice. 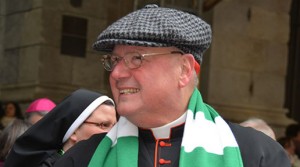 On Wednesday, September 3, at a reception at the New York Athletic Club, Cardinal Timothy Dolan will be named as the grand marshal of the 254th St. Patrick’s Day parade, set to step off on Tuesday, March 17.

In a historic move aimed at defusing the storm that erupted this year over the exclusion of gay banners in the march, the addition of a banner identifying gay NBC staffers is a compromise forged at the insistence of several New York City St. Patrick’s Day Parade Committee members, including Dr. John Lahey, president of Quinnipiac University in Connecticut, and Francis X. Comerford, chief revenue officer for NBC-owned TV stations.

NBC, the long-time broadcast home of the St. Patrick’s Day parade, was prepared to drop its coverage unless a compromise that resulted in the inclusion of a gay group was brokered.

The withdrawal of parade sponsorship last year by Guinness was also a huge factor in bringing about the change, according to a former grand marshal.

“Once an iconic company like Guinness showed it was standing up pretty much everyone else had to follow,” said the source, who revealed that Guinness had met with parade figures on several occasions since to help seek a compromise.

The NBC network has a large and visible presence on Fifth Avenue for the event, and a majority of committee officials and trustees are on board with the inclusion of gay NBC staffers in the line of march.

In the past, organizers said gays were free to march but only with other groups and not with banners identifying them as gay. Most marching units in the parade carry identifying banners. There are about 320 units in next year’s parade, the committee said.

The committee said its “change of tone and expanded inclusiveness is a gesture of goodwill to the LGBT community in our continuing effort to keep the parade above politics.”

The statement said the parade was “remaining loyal to church teachings,” and O’Reilly said Cardinal Timothy Dolan, who is to be the parade’s grand marshal next year, was “very supportive” of the change.

“I know that there are thousands and thousands of gay people marching in this parade,” he said. “And I’m glad they are.”

Dolan was expected to appear at a scheduled news conference Wednesday afternoon.

Police Commissioner William Bratton marched last year with a contingent of uniformed officers. Gay activists held a news conference before the march to say officers should not participate in uniform.

Uniformed city workers, marching bands with bagpipes, traditional Irish dancers and politicians are traditional participants at the parade, which began in 1762 and can draw hundreds of thousands of participants and spectators.

Never in the history of New York’s St. Patrick’s Day Parade have homosexuals been barred from marching, anymore than pro-life Catholics have, but in both cases they were not permitted to have their own unit. I have been assured that the rules have been formally changed to allow both of these groups, as well as others, to march under their own banner. That being the case, there should be no controversy. One would hope that all the new entries will conduct themselves in a manner that honors St. Patrick, lest another round of controversy emerges.

September 3, 2014
Another gay teacher reportedly fired from Catholic school over pregnancy
Next Post

September 3, 2014 Down syndrome teen hopes to serve Mass in every state
Browse Our Archives
get the latest from
Catholic
Sign up for our newsletter
POPULAR AT PATHEOS Catholic
1