Joe Biden in Iowa: “You’re looking at a kid who had 12 years of Catholic education”

Joe Biden in Iowa: “You’re looking at a kid who had 12 years of Catholic education” September 18, 2014 Deacon Greg Kandra

At a Vatican meeting a few years ago, Pope Benedict XVI unexpectedly asked Vice PresidentJoseph R. Biden Jr. for some advice. “You are being entirely too hard on the American nuns,” Mr. Biden offered. “Lighten up.”

Last year, Mr. Biden seized on an audience with Pope Francis as another opportunity to praise the sisters who remained the target of a Vatican crackdown for their activism on issues like poverty and health care. 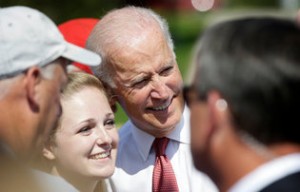 And on a visit to Iowa on Wednesday, Mr. Biden literally, as he might put it, got on board with the nuns.

“You’re looking at a kid who had 12 years of Catholic education,” Mr. Biden, wearing a white shirt and a red tie, said before a backdrop of the gold-domed Iowa statehouse and a “Nuns on the Bus” coach bus. “I woke up probably every morning saying: ‘Yes, Sister; no, Sister; yes, Sister; no, Sister.’ I just made it clear, I’m still obedient.”

The issue of obedience has weighed on those nuns of late, as the Vatican has deemed the women on stage with the vice president radical feminists who pay too much attention to social justice and too little to promoting church teaching on issues like abortion and same-sex marriage….While political reporters focused on Mr. Biden’s appearance as his first foray back into a presidential campaign season, the outing also put the nation’s first Roman Catholic vice president in the middle of a protracted political fight between the pope he admires and the American nuns he reveres.

September 17, 2014
Cardinal Dolan explains why he is serving as Grand Marshall in the St. Patrick's Day parade
Next Post

September 18, 2014 "Catholic witchdoctors" in Bolivia?
Browse Our Archives
get the latest from
Catholic
Sign up for our newsletter
POPULAR AT PATHEOS Catholic
1