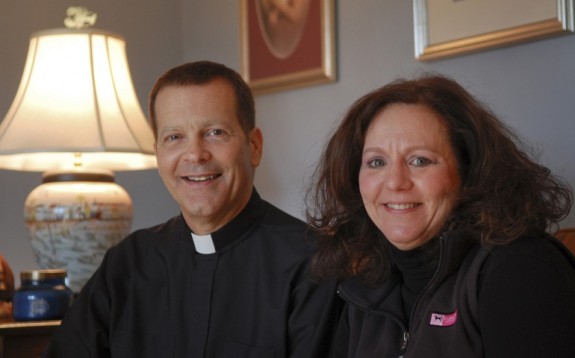 A parishioner walks up to her pastor and says, “I want to give you my kidney.”

Fr. Michael Whyte arrived at St. Catherine of Siena Parish in 2007 and has been pastor there since 2008. A type 1 diabetic, he began experiencing extreme tiredness and nausea at about that time, signs of kidney failure as a result of diabetes. Doctors gave him three choices: go on dialysis and live five or six more years; do nothing and die within six months; or get a kidney transplant and — if it’s from a live donor — live 20 to 25 years.

Two years ago, he announced at Mass that he was on the waiting list for a kidney.

More than one parishioner offered to be tested to see if they would be qualified donors, but Margaret Domashinski, a parishioner who lives in West Suffield, Mass., already knew she would be the one.

“I knew I was a match,” she said during an interview at the parish rectory Nov. 19. “I know that’s kind of spooky, but it’s true. I knew.”

Asked what it was about Whyte that prompted her to make the offer, Domashinski paused, as if puzzled by the question. “He needed a transplant. He needed a kidney,” she said.

Whyte, looking fit as he sat beside his donor 10 weeks after transplant surgery, said, “I think it is very difficult when someone tells you that they’re considering getting tested or they would like to give you a body part. It is very hard to say” — he struggled for words, then continued — “[a] thank-you doesn’t seem to be appropriate.”

December 6, 2014 NFL star gives up his career to help the needy
Browse Our Archives
Related posts from The Deacon's Bench