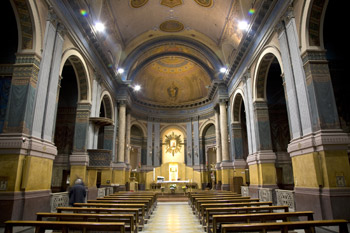 Celibacy could have contributed to the instances of child sexual abuse in the Catholic church, a report by the church’s Truth, Justice and Healing Council in Australia has found.

The report, released on Friday as a response to the royal commission into institutional responses to child sexual abuse, said “obligatory celibacy” for Catholic priests “may … have contributed to abuse in some circumstances”, and recommended priests undergo “psycho-sexual development” training.

Council CEO Francis Sullivan told Guardian Australia that priests needed to undergo “education” to develop emotional and sexual awareness, “like what you and I do as adults”.

“Because they are in an environment, in a service, that’s very intimate and close with people, they need to be quite clear about the boundaries, and what is and isn’t appropriate,” he said.

Sullivan said the group was not suggesting abolishing the vow of celibacy, but rather addressing how priests can “keep the integrity of their vows”.

“It’s about learning the risks of blurring the boundaries. Knowing the risks that intimacy can bring,” he said. “We are not talking about lifting the vow of celibacy.”

Sullivan said the issue of celibacy had been raised numerous times in royal commission hearings, and said it was clear the commission would spend more time on it.

“When you have got a major inquiry into the sex abuse culture in the Catholic church, you can’t just put your head in the sand. It’s very clear that in some cases there have been inadequate professional cross-boundaries in their service of their parishioners,” he said.

The report said the church’s response to child sex abuse had been shaped by its culture and “clericalism”, which it defined as an “ordained ministry geared to power over others, not service to others”.

“Church institutions and their leaders, over many decades, seemed to turn a blind eye, either instinctively or deliberately, to the abuse happening within their diocese or religious order, protecting the institution rather than caring for the child,” the report said.

It said the selection process for priests may have contributed to a culture that ignored abuse.

The full report is available here.  A pertinent excerpt:

There has also been much discussion about the impact of ’clericalism‘, which can be understood as referring to approaches or practices involving ordained ministry geared to power over others, not service to others. Clericalism has been seen as a contributing factor to the way in which the Church has responded to abuse claims and engaged with survivors. It may be seen as having played a part in the following:

• historically Church leaders seemed to have responded virtually identically to complaints of child sexual abuse
• Church institutions and their leaders, over many decades, seemed to turn a blind eye, either instinctively or deliberately, to the abuse happening within their diocese or religious order, protecting the institution rather than caring for the child
• historically, parents were reluctant to believe their children and did not confront Church leaders about allegations of abuse
• obedience and closed environments also seem to have had a role in the prevalence of abuse within some religious orders and dioceses
• another contributor may have been the way in which candidates for the priesthood or religious life were accepted for entry, and
• obligatory celibacy may also have contributed to abuse in some circumstances.

December 11, 2014
Pew: Pope Francis enjoys broad support, positive image across much of the world
Next Post

December 12, 2014 Arf: pope's comment about "creatures in heaven" stirs debate
Browse Our Archives
get the latest from
Catholic
Sign up for our newsletter
POPULAR AT PATHEOS Catholic
1