Andrew Lloyd Webber’s solution to save Christianity in the UK: WiFi 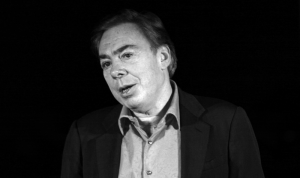 Andrew Lloyd Webber in 2007 (photo by Tracey Nolan from Toronto, Canada via Wikipedia)

From The Daily Mail:

The Oscar-winning composer behind “Jesus Christ Superstar” is planning an even more ambitious scheme to connect the nation with its Christian heritage – wi-fi in every church.

Andrew Lloyd Webber, whose father was music director at a London church, said the initiative would put the increasingly deserted buildings back at the centre of their local communities.

The theatre impresario behind musicals including Cats and Evita has been in talks with Culture Minister Ed Vaizey, who is ‘actively’ considering the project.

…Welcoming the wi-fi plans, the Bishop of Norwich, the Rt Rev Graham James, said his diocese was already using steeples to provide broadband to remote areas, adding: ‘It’s an imaginative way of using our huge network of ancient buildings for community purposes.’

January 6, 2015
About those new cardinals: the Vatican's explanation
Next Post