The transformation of Boston’s “Little Rome” 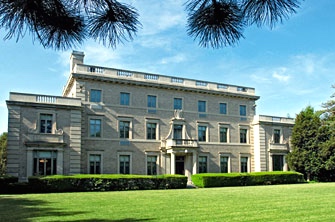 The house on the rise has long been a symbol of Catholicism in Boston. When it was built, its grandeur demonstrated the wherewithal of the city’s newly powerful Roman Catholic community. When it was sold, the transaction reflected the straits of a once-powerful archdiocese brought low by scandal.

Now, the bedrooms of the Italianate palazzo where all of Boston’s 20th-century cardinals, as well as a visiting Pope John Paul II, once slept have been gutted, in preparation for it to be remade as a museum.

The conversion of the cardinals’ residence is the final step in the transformation of a leafy expanse on the western edge of Boston that was once so packed with Catholic institutions — a seminary, a college, the residence and the archdiocesan headquarters — that it was referred to as Little Rome. It is still Catholic — most of the land is owned by Boston College, a Jesuit institution, and there are crosses and a statue of St. Ignatius on the campus. But the seminary gymnasium is now a dance studio; the old tribunal, where marriages were annulled, houses a center on aging; and the former chancery is the college’s alumni center.

A decade after the Archdiocese of Boston began the process of selling property at its headquarters to Boston College to pay victims of sexual abuse by clergy members, the most visible vestiges of the land’s historical uses are an archdiocesan seminary, now in half the building it once filled, and a grave site for the cardinal who acquired much of the land but whose remains were disinterred and relocated as a condition of the real estate deal.

“This property was a visible symbol of the imperial archdiocese in the early 20th century, and then, during the very difficult years in 2002 and 2003, it was a site of daily protest and picketing,” said David Quigley, a historian and the provost of Boston College. “The talented young people buzzing around the campus are the most hopeful sign that there’s something distinctly Jesuit and Catholic playing out there today, but not necessarily something that earlier leaders would have recognized.”

January 3, 2015 For sale: Europe's empty churches
Browse Our Archives
get the latest from
Catholic
Sign up for our newsletter
POPULAR AT PATHEOS Catholic
1