Knights of Columbus responds: “The State Council deeply regrets the violation of policy…”

The latest on the St. Patrick’s Day parade story:

On Thursday afternoon, the Knights of Columbus Virginia State Council posted an updated statement to its website:

It said the state council “reaffirms the longstanding policy of the Knights of Columbus not to invite or bestow honors on public officials who do not support the legal protection of unborn children. … The State Council deeply regrets the violation of this policy by a council in Norfolk for its St. Patrick’s Day Parade. We are conducting an investigation to determine how and why this occurred, and we will ensure that such incidents do not recur in the future.”

The state deputy for the Knights of Columbus says the selection of Gov. Terry McAuliffe to lead the annual St. Patrick’s Day parade in Ocean View does not imply approval of his views.

The Knights prefer to keep politics out of such celebrations as a general rule, wrote Steve Burnley, and usually discourage inviting politicians.  But other governors as well as political and civic leaders have served as grand marshal in the past, he wrote.

“The parade is a nonpartisan, apolitical civic event that is open to the public…” Burnley wrote. “The Governor’s participation should be understood in that sense alone.”

Check out the complete statement here. 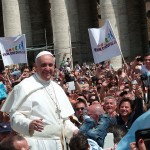 March 13, 2015 In new interview, Pope Francis talks about his pontificate: "I feel that the Lord has placed me here for a short time"
Browse Our Archives
get the latest from
Catholic
Sign up for our newsletter
POPULAR AT PATHEOS Catholic
1