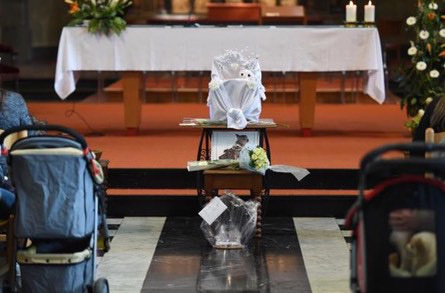 It happened on April 22, 2015 in the city of Sambreville, Belgium, in St. Victor Church of Auvelais. The parish priest, Fr. Francis Lallemand, took the initiative of celebrating the first religious service for a dog that we know of. He opened his church for the burial religious and preached a homily during the ceremony, above. A white crib placed in front of the altar had the cremated remains of a Chihuahua called “Miss Chiwa,” which had been a model for dog “clothes” in magazines and TV advertisements. During the ceremony a woman identified as the “mother” of the dog – actually its owner – delivered a speech recalling the “great deeds” of the dog, as it were a human being. Fr. Lallemand was at her side to encourage her.

May 6, 2015 Who is Marco Rupnik? And what was he thinking with that Jubilee of Mercy logo?
Browse Our Archives
Related posts from The Deacon's Bench