Who is Marco Rupnik? And what was he thinking with that Jubilee of Mercy logo? 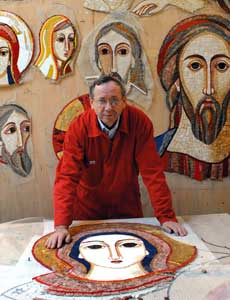 Well, quite a few people have expressed their displeasure at the Jubilee of Mercy logo—you can find a lot of justified grumbling here and here and here.

I was curious to find out more about the artist and didn’t have to look far.

Fr. Marko Ivan Rupnik was born 28 November 1954 in Zadlog, Slovenia near Idrija. In 1973 he entered the Society of Jesus. He studied philosophy in Ljubljana and then, in 1977, enrolled in the Academy of Fine Arts in Rome where he finished studies in 1981. Theological studies at the Pontifical Gregorian University of Rome followed. He was ordained a priest in 1985. Still at the Gregorian, he began a specialization in missiology. In 1991 he earned a doctorate from the Gregorian’s Faculty of Missiology with a dissertation on The Theological Missionary Meaning of Art in the Writings of Vjaceslav Ivanovic Ivanov.

In 2013 he received a doctorat honoris causa from the University Francisco de Vitoria of Madrid and in 2014 from the Faculty of Theoogy of Lugano.

His work as an artist and theologian has always been complimented with work that is more specifically pastoral, above all in leading numerous courses and retreats.

Can you outline for us, on the basis of your experience at the Aletti Center, the ideal profile of an artist operating in the liturgical sphere? How should he behave, to what should he pay heed? RUPNIK: Naturally there is no fixed rule. Undoubtedly there is always an attraction at work in the life of every artist. There is a beauty that attracts. The theologian Pavel Florenskij used to say: “Truth revealed is the Love and Love achieved is Beauty”. That’s it, the artist is attracted by Beauty, which is Love achieved, that is Easter. He can have by grace the humility to let the Mystery fertilize him. Those who work with this Mystery can’t do other than welcome it, give it space in their lives and let it go to work.

Other important features? RUPNIK: First of all humility, but not understood in the psychological sense, that is as an attitude to adopt, as if it were the fruit of one’s own intelligence or diligence. Humility is the gift of the Holy Spirit, that bloweth where it listeth and may grip non-Christian artists also. It is a matter precisely of theological humility. The more mature the artist is in the knowledge of receiving this gift the more he will be dispossessed of his work and its production will not be the sphere of his self-affirmation, but of his humble service. Only in that way can the work be handed over to the many and the many will recognize themselves in it. With art it’s like with love: one demands humility and action. The more humble one is the more one is veined with love. The more one involves oneself personally the more one is universal.

And then? RUPNIK: One needs to be very familiar with the Word of God – because, as Nicene II says, art is a translation of the Word of God – and with the memory of the Church: the Fathers, the saints, Christian art. One also needs to be inward with the debate of the century in which one lives, that is to be familiar with the contemporary artistic idiom, and to be inserted in the life of the Church. One must have a spiritual life, live the same difficulties as our contemporaries so as to be able to share with them the steps in the redemption bestowed to us. For us at the Aletti Center, working in chorus is fundamental. Working together, constantly engaging in mutual charity and fruitful dialogue. Out of the Church one creates for the Church.

The explanation for the logo:

The logo presents a small summa theologiae of the theme of mercy. In fact, it represents an image quite important to the early Church: that of the Son having taken upon his shoulders the lost soul demonstrating that it is the love of Christ that brings to completion the mystery of his incarnation culminating in redemption. The logo has been designed in such a way so as to express the profound way in which the Good Shepherd touches the flesh of humanity and does so with a love with the power to change one’s life. One particular feature worthy of note is that while the Good Shepherd, in his great mercy, takes humanity upon himself, his eyes are merged with those of man. Christ sees with the eyes of Adam, and Adam with the eyes of Christ. Every person discovers in Christ, the new Adam, one’s own humanity and the future that lies ahead, contemplating, in his gaze, the love of the Father.

The scene is captured within the so called mandorla (the shape of an almond), a figure quite important in early and medieval iconography, for it calls to mind the two natures of Christ, divine and human. The three concentric ovals, with colors progressively lighter as we move outward, suggest the movement of Christ who carries humanity out of the night of sin and death. Conversely, the depth of the darker color suggests the impenetrability of the love of the Father who forgives all.

You can see more about Fr. Rupnik’s work in the piece below, which aired on Salt + Light TV a couple years back. As they noted then:

His bold, colourful icons bridge Eastern and Western traditions in a jubilant mix of art that is both new and ancient.  In fact, in 1993 when Pope John Paul II saw his work he was so taken that he invited Fr. Rupnik to decorate the Redemptoris Mater chapel in the Vatican’s Apostolic Palace. Today Father Rupnik’s work can be found in sacred spaces all over the world.

May 6, 2015 Santorum to announce campaign plans on May 27
Browse Our Archives
Related posts from The Deacon's Bench