A papal envoy Saturday declared slain Archbishop Óscar Romero “blessed” in a ceremony that drew hundreds of thousands of people and moved the Catholic martyr one step closer to sainthood 35 years after a sniper’s bullet felled him at the altar.

Known as a champion of the poor and a voice for the voiceless, Romero was slain in 1980 at the outset of a civil war that lasted for a dozen years. His beatification had been blocked for three decades by conservatives in the church hierarchy until Pope Francis, the first Latin American pope, ordered that it move forward.

As throngs stood under a hazy tropical sun, Francis’ representative, Cardinal Angelo Amato, speaking in Latin, read the decree of beatification, drawing a roar of approval.

As church bells pealed, robed seminarians hefted onto their shoulders a carriage containing a glass enclosure with the bloody shirt Romero was wearing the day of his assassination and paraded before six cardinals and some 100 bishops.

Also attending the ceremony were the presidents of Panama and Ecuador and delegations from two dozen countries. Church estimates put the crowd size at well over 250,000.

The slain archbishop henceforth will be known as Blessed Óscar Romero, although some at the ceremony said they consider canonization inevitable.

“He’s a saint. Saint Romero. Let him perform miracles,” said Erminia Medrano Hernández as she stood in a crush near the open-air flower-bedecked stage.

…In a letter Saturday to the current archbishop of San Salvador, the pope called for “true national reconciliation” and said Romero distinguished himself for his concern for “the poor and the marginalized.”

President Barack Obama, in a statement, hailed the church’s new direction under Francis. “I am grateful to Pope Francis for his leadership in reminding us of our obligation to help those most in need, and for his decision to beatify Blessed Oscar Arnulfo Romero,” he said. 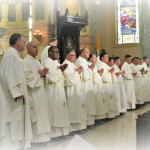 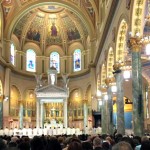 May 23, 2015 "We beseech you, Lord: look with favor on these servants of yours..."
Browse Our Archives
get the latest from
Catholic
Sign up for our newsletter
POPULAR AT PATHEOS Catholic
1

Baptism: An Awesome Occasion
Our first sacrament as Catholics is baptism. It is the gateway to...
view all Catholic blogs
Copyright 2008-2021, Patheos. All rights reserved.