Caitlyn Jenner is no Arthur Ashe

There’s been a lot of ink spilled over the fact that ESPN is giving its Arthur Ashe Courage Award to the cover girl of the moment, Caitlyn Jenner (a.k.a. Bruce).

A number of more worthy recipients have been mentioned—and at least one writer has noted that, despite online buzz, Noah Galloway was not a runner-up for the award. 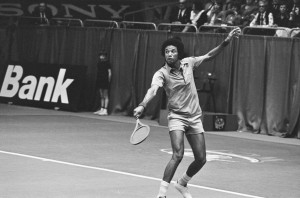 One can debate the merits of the Jenner honor—I offer my own opinion below. But what can’t be debated is the life and legacy of the man for whom the award is named, Arthur Ashe.

Born on July 10, 1943, in Richmond, Virginia, Arthur Ashe became the first, and is still the only, African-American male player to win the U.S. Open and Wimbledon. He is also the first black American to be ranked No. 1 in the world. Always an activist, when Ashe learned that he had contracted AIDS via a blood transfusion, he turned his efforts to raising awareness of the disease, before finally succumbing to it on February 6, 1993.

…For Ashe, however, success also brought opportunity and responsibility. He didn’t relish his status as the sole black star in a game dominated by white players, but he didn’t run away from it either. With his unique pulpit, he pushed to create inner city tennis programs for youth; helped found the Association of Men’s Tennis Professionals; and spoke out against apartheid in South Africa—even going so far as to successfully lobby for a visa so he could visit and play tennis there.

Ashe’s causes were shaped by both his own personal story and his health. In 1979, he retired from competition after suffering a heart attack, and wrote a history of African-American athletes: A Hard Road to Glory (three volumes, published in 1988). He also served as national campaign chairman of the American Heart Association.

Ashe was plagued with health issues over the last 14 years of his life. After undergoing a quadruple bypass operation in 1979, he went under the knife again in 1983 for a second bypass. In 1988, he underwent emergency brain surgery after experiencing paralysis of his right arm. A biopsy taken during a hospital stay revealed that Ashe had AIDS. Doctors soon discovered that Ashe had contracted HIV, the virus that causes AIDS, from a transfusion of bad blood that he was given during his second heart operation.

Initially, Ashe kept the news hidden from the public. But in 1992, Ashe came forward with the news after he learned that USA Today was working on a story about his health battle. Finally free from the burden of trying to hide his condition, Ashe poured himself into the work of raising awareness about the disease. He delivered a speech at the United Nations, started a new foundation, and laid the groundwork for a $5 million fundraising campaign for the institution.

He continued to work, even as his health began to deteriorate, making it down to Washington, D.C. in late 1992 to participate in a protest over the United States’ treatment of Haitian refugees. For his part in the demonstration, Ashe was taken away in handcuffs. It was a poignant final display for a man who was never shy about showing his concern for the welfare of others.

Those of us who watched Ashe’s very public dying couldn’t fail to be moved by his spirit of generosity, compassion and grace. At a time when AIDS suffers were being vilified and treated as lepers—when some still thought it was contagious—he helped bring dignity to many who suffered. He could have been angry and bitter over the circumstances that gave him this disease, or he could have been justifiably furious over the media storm that forced him to reveal his illness. He wasn’t. (To this day, my wife—who doesn’t have many secular heroes—speaks of Arthur Ashe with reverence and awe.)

It has to be said:  bestowing this prize on the likes of Caitlyn Jenner—whose life is now a clanging carnival of self-promotion, gossip, publicity stunts and reality TV hucksterism— insults the memory of the truly courageous man for whom it is named. 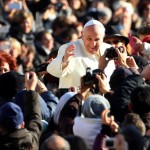 June 4, 2015
Let us prey: scammers ripping off faithful who want to see Pope Francis in U.S.
Next Post