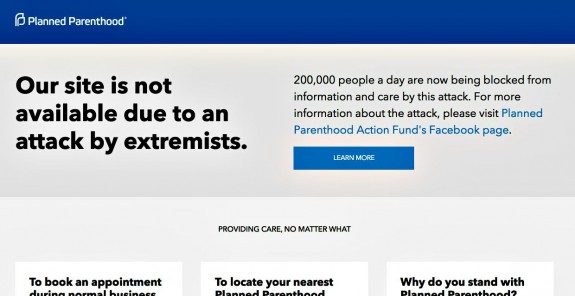 Planned Parenthood’s website went down Wednesday afternoon in what the nonprofit health services organization called “an attack by extremists.”

The hack comes in the wake of the publication of several undercover videos by anti-abortion activists seemingly showing Planned Parenthood officials discussing the sale of fetal tissue and organs for medical research. Selling fetal organs for a profit is a felony, but the footage is highly edited and it is not clear that is what the officials are discussing.

The website was downed using a distributed denial of service (DDoS) attack, a tactic used by hackers to flood a site with traffic and keep users from accessing the site, said Dawn Laguens, Planned Parenthood’s executive vice president, in a statement issued Wednesday evening.

“This is a new low for anti-abortion extremists; 200,000 people a day count on Planned Parenthood’s website for accurate health information,” Laguens said. “Blocking people from accessing information on the full range of sexual and reproductive health — including birth control, sexually transmitted infections, healthy relationships, parenting and preventive care — only shows how far opponents of safe and legal abortion will go.”

No one has claimed responsibility for the hack so far, and CNN could not independently verify Planned Parenthood’s claim.

Users trying to access the site are currently met with a temporary page noting that “our site is not available due to a hack by extremists.”

But The Federalist notes:

Even though ppaction.org redirects to a page saying the site was hacked, the domain still house a perfectly functional URL and page that are being actively used to help build Planned Parenthood’s fundraising list. Coincidentally, this “hacking” happened just days after Planned Parenthood decided to hire a PR firm, SKDKnickerbocker, to help manage its response to the widening baby organ trafficking scandal.

Planned Parenthood says it’s been hacked by “extremists,” but a review of the publicly available evidence suggests that the only things being hacked at Planned Parenthood right now are perfectly healthy and viable unborn babies.

As for SKDKnickerbocker…the PR outfit released a statement a couple days ago with some very familiar language:

“Planned Parenthood is a longtime client, and we are proud to help them push back against these extremist attacks from people who want to end reproductive health care for women in this country,” a SKDKnickerbocker spokesman said in a statement.

Frankly, this doesn’t pass the smell test. A reader who knows more about this stuff than I do dropped me a line this morning:

I work with websites and the logic for the site being down is “fuzzy.” They say the site is down because of an attack by extremists, but you can still access a smaller, functioning site saying “our site is down because of an attack.” In my experience, when you’re down, you’re down until you’re up. There could be a victimization narrative at work here, although it would take someone with more advanced tech insights to assess what’s going on from a hosting standpoint.

Planned Parenthood proclaimed on Thursday that its websites were “not available because of an extremist attack,” but changed its story in the middle of the day after many people pointed to inconsistencies about the alleged hack.

At around noon, the message on the group’s homepage was changed to read that “our normal site is currently undergoing maintenance.”

… While the group’s main site appeared to downgrade the event from a malicious hack to a website upgrade, Planned Parenthood has not removed its Facebook post on the hack which says that “today, anti-abortion extremist hackers brought down plannedparenthood.org.”

Planned Parenthood did not respond to a request for comment.

July 30, 2015
Austrian theologian: “Married priests and women deacons should be reintroduced as soon as possible"
Next Post

July 30, 2015 Coming to TV this Halloween: "Exorcism: Live!"
Browse Our Archives
get the latest from
Catholic
Sign up for our newsletter
POPULAR AT PATHEOS Catholic
1

A House Divided
For the past few years, I've written a baseball poem about watching...
view all Catholic blogs
Copyright 2008-2021, Patheos. All rights reserved.