A Catholic priest accused of child abuse was not reported to police despite apparently admitting he ordered a group of Scouts to strip naked, an independent inquiry has been told.

Father John Tolkien, son of The Hobbit author JRR Tolkien, returned to active ministry after allegedly being ‘sent for treatment’ by the Roman Catholic Archdiocese of Birmingham in the late 1960s.

A week-long series of hearings of the Independent Inquiry into Child Sexual Abuse is examining the archdiocese’s response to allegations made against four priests including Fr Tolkien, who died in 2003.

Addressing the inquiry panel on Monday, counsel to the inquiry Jacqueline Carey said Fr Tolkien had ‘repeatedly and consistently’ denied the allegations made by a complainant to the Catholic Church in 1993.

The alleged sexual abuse is said to have taken place while Fr Tolkien was a priest in the Sparkhill area of Birmingham in the 1950s, when the complainant was 12.

Mrs Carey told the inquiry the then Archbishop of Birmingham, Maurice Couve de Murville, informed the complainant in 1993 that Fr Tolkien was in poor health and was going to retire.

The lawyer told the inquiry panel, which is sitting in London: ‘As part of Archbishop Couve de Murville’s 1993 inquiries, he appears to have read a note from 1968 which alleged that Fr Tolkien had made some Boy Scouts strip naked.

‘The actual 1968 note is not available but we have Archbishop Couve de Murville’s note of the note, which on the face of it suggests that Fr Tolkien admitted those allegations, and was possibly sent for treatment.

The panel was told that the allegations were reported to police in 1994 but no action was taken until an inquiry was launched in May 2001, which did not lead to any charges. 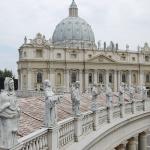 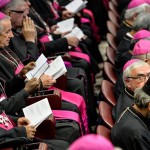 November 13, 2018 'The February meeting better deliver something dramatic, or there will be blood in the water'
Browse Our Archives
get the latest from
Catholic
Sign up for our newsletter
POPULAR AT PATHEOS Catholic
1

St. Maximos, The Will, And Universal...
A Little Bit of Nothing
Books by This Author Books by Deacon Greg Kandra

The Scandal Of William Barr
“Say to them, As I live, says the Lord GOD, I have...
view all Catholic blogs
Copyright 2008-2020, Patheos. All rights reserved.