More than one deacon at Mass?

The question popped up this week at Zenit:

Part of the answer, from the Rev. Edward McNamara:

All things being equal, when there are two deacons, they are usually divided as the deacon of the Word and the deacon of the Eucharist. It must be pointed out, however, that this terminology, although common, is not official and is generally absent from the liturgical books.

The deacon of the Eucharist attends to all that has to do with the altar and recites the private prayers used for the preparation of the chalice. He stands to the celebrant’s right during the Eucharistic Prayer. He may place or remove the chalice pall as needed and holds the chalice aloft during the final doxology. If necessary, he can also assist in the fraction rite. If the deacon of the Word is incensing the Blessed Sacrament, then he may also assist with the missal.

Both deacons stand slightly behind the priest when he is at the altar. Concelebrating priests should be careful so as not to obstruct the actions of the deacon.

This is the usual division of roles in papal and other solemn liturgies. However, as mentioned, these customs are not cast in bronze, and they do not respond to precise norms. I believe that the division has been left fairly open so as to be able to adapt to changing circumstances.

A deacon who is to preach should usually take the role of the deacon of the Word so as to carry out both functions with ease and without interruptions.

There may occasionally be good reasons for a change in minister. For example, if the Gospel is to be sung, then the deacon better qualified for this task may proclaim the sacred text, even though another will preach.

Deacons, take note: if there will be more than one of you serving, talk to one another before Mass. Determine the division of labor — who will do what, and how. This will avoid any glaring mistakes and, moreover, help keep the two deacons from looking like fools. I still remember vividly a Mass I attended before I was ordained; at the Sign of Peace both deacons on the altar said, in unison, “Let us offer one another the sign of peace,” and the two then glared at each other as if to say, “That was my line, you idiot.”

Deacon pro tip: Don’t do that. 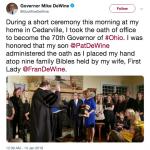 January 15, 2019
New governor swears on a stack of Bibles. Really.
Next Post 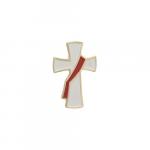 January 16, 2019 Vatican commission members speak out about research on women deacons
Browse Our Archives
Follow Us!

Fake And Real Virtue
“The virtuous may appear to be bad, but essentially they are good;...
view all Catholic blogs
Copyright 2008-2020, Patheos. All rights reserved.