From ‘Powerful’ to ‘Embarrassing’: Reaction to Benedict’s Letter

It’s only been out there less than a day, but already Benedict XVI’s 6,000-word letter on the sex abuse crisis is stirring reactions. Many are quick takes from social media. A few who have absorbed it have offered more thoughtful analysis.

His comments on the sex abuse crisis seem certain to inflame tensions between conservative Catholics, who largely blame homosexuality and lax sexual ethics for the scandal, and liberals, who say there is no known connection between homosexuality and pedophilia. As word of Benedict’s essay spread Wednesday evening, conservative Catholics hailed it, while others called it “embarrassing.”

Here are some first takes from around the interwebs. I’ll add more as they trickle in.

From Michael Brendan Dougherty, in the National Review Online:

Benedict’s intervention in this debate is powerful and a sad one. The very fact of this letter — its lucidity and depth of thoughts — can’t help but inspire a question from Catholics. Why did this man resign from the office of the papacy? The stated fears were ones of incapacity, but in this letter, he demonstrates an acute view of the Church. For many Catholics who disagree with Benedict’s diagnosis of the problem, it will occasion the question about Benedict’s supposed commitment to retiring into silence. What does it mean to have a former pope who is so loquacious and opinionated?

And yet, reading this occasionally acerbic and aggrieved letter, this writer felt gratitude for Benedict’s papacy and for a God who, in this time of exile, preserves one righteous man as a living promise of many more saints to come.

The idea that the sexual mores of the 1960s were to blame (a common refrain in many of Pope Benedict’s earlier writings) neglects the fact that sex abuse happened in the church during the 1940s and 1950s, and far earlier. People had sex outside of marriage and molested children in the supposedly wholesome 40s and 50s; and many of the priests who abused did so decades before the late 60s, when presumably the cultural infection was peaking and were educated and formed as priests long before that.

Finally, it blames the sex abuse crisis on the culture, not the church. It focuses on the outside rather than the inside, failing to look at the deep structural flaws and sins within the church (specifically, a clericalism that privileged the word of the priest over the victim.

This was a disappointing analysis from a brilliant theologian.

Against those who would tear everything down, he contextualized the genesis of Veritatis splendor and then defends it against the German attacks on theology which would have resulted in disaster.  He has, surely, the papalotrous in mind.

Benedict includes in this piece, which rambles in and out of his familiar tropes, a poignant cri de coeur. And he calls for radical recovery of the love of God, our love for him and our recognition of His for us, and the establishment of “habitats of faith”, where Faith can dwell.

As I read it, I sensed Benedict’s great pain.

From R.R. Reno in First Things:

The tone of the document is his usual one, that of calm and matter-of-fact statements. Overall, it’s more testimony than analysis, testimony from a man who lived through cultural convulsions and theological betrayals. And it’s a faithful man’s testimony of God’s enduring love.

From Brian Flanagan, Associate Professor at Marymount University, via Twitter:

From David Gibson, director of Fordham University’s Center on Religion and Culture, on Twitter:

Another major problem with Benedict XVI’s opus blaming the abuse crisis on liberal mores and gays and secularization etc: As a friend notes, B16’s narrative runs against everything said and done at the February summit. So it is deeply problematic and damaging at a crucial time.

From The Catholic League:

It is illuminating because he shows how forces inside and outside the Church came together to create the problem, and it is courageous because he speaks the truth about matters that are already causing an uproar…

…Thank God we still have the seminal voice of Pope Emeritus Benedict XVI to guide us. He is indispensable.

From C.C. Pecknold in the Catholic Herald:

Benedict asks our question directly: “Why did pedophilia reach such proportions?” His answer is not political but theological: “Ultimately, the reason is the absence of God.”

Since we are no longer accustomed to speaking well about God in society, this answer is bound to meet with some indifference. But I suspect that after all the studies are done, after the review boards are formed, cases heard, after new protocols and safeguards are in place, Benedict’s answer will be the one which endures. What will be remembered as the seed of renewal, as the root of restoration, is precisely Benedict’s counsel that we turn our faces back to Christ who is the perfect image of the Father’s love.

Throughout the text there are glimmers of the old Ratzinger, hints of genius and beauty. “If we really wanted to summarize very briefly the content of the Faith as laid down in the Bible, we might do so by saying that the Lord has initiated a narrative of love with us and wants to subsume all creation in it,” the pope emeritus writes. “Faith is a journey and a way of life,” he writes, phrasing that seems very much in line with Vatican II.

But, on the whole, this is a regrettable text that will only harm the reputation of the former pontiff.

Towards the end of his life, I had a long interview with Cardinal Francis George. The diagnosis that his cancer was terminal was known to us both. It became quickly obvious to me that he was deeply depressed, as well he might be. His usually careful reasonings — we had spoken a number of times before, and he enjoyed talking to me about my columns — were replaced by extremely gloomy assertions and predictions. After a few minutes, I put down my pen. I was never going to use the words that were coming from his mouth because they were things he would not have said were he not in that condition. Reading this document from Pope Emeritus Benedict reminded me of that moment and raised this question: Was there no one who loves him enough to save him from the embarrassment that this will cause? 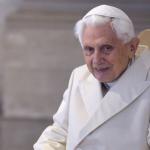 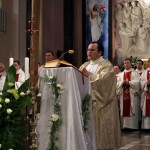 April 11, 2019 When the Pastor Tells You He'll be Singing 'The Exsultet'
Browse Our Archives
get the latest from
Catholic
Sign up for our newsletter
POPULAR AT PATHEOS Catholic
1

Catholic Bard Black Friday Special: More Saints
It's Black Friday and the sales are going on on-line. It's the...
view all Catholic blogs
Copyright 2008-2020, Patheos. All rights reserved.