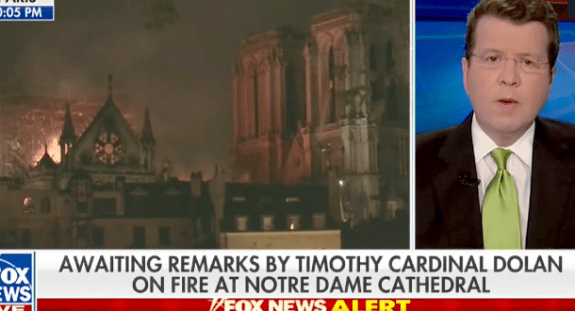 Fox News’ Neil Cavuto had to hang up on Catholic League president Bill Donohue during live coverage of the Notre Dame fire when the conservative activist refused to stop speculating about the cause of the blaze.

Donahue was a guest on Monday’s edition of Your World with Neil Cavuto, and managed to last just over seventy seconds before Cavuto was forced to dump him.

Cavuto began by musing that the cathedral will never be the same, as it was, and Donohue replied “Well, Neil, if it is an accident, it’s a monumental tragedy. but forgive me for being suspicious.”

“Just last month, a 17th century church was set on fire in Paris,” Donohue continued. “We have seen Tabernacles knocked down, crosses have been torn down, statues have been smashed.”

“Bill, we don’t know that, we don’t know,” Cavuto interrupted. “So if we can avoid what your suspicions might be, I do want to look at what happens now.”

But that wasn’t the end of it. Check out the clip at the link.

UPDATE: Bill Donohue fired back at Fox and Cavuto on the Catholic League website.

His statement, in part:

I was shocked when Neil cut me off, simply because I entertained the thought that it might be terrorism. I did not mention any religious or secular group that may have been involved, and indeed would not have speculated at all were it not for a recent series of ugly anti-Catholic events in France.

I have known Neil for a long time. He’s a good guy. But what he did yesterday was unfair. My guess is he was following the marching orders from above.

If Fox News wants to be agnostic on the origins of the Notre Dame fire, that’s fine. But when hosts won’t allow guests to have their own opinion—even when it is couched in entirely reasonable terms—then it’s clear that Fox has a problem. Is it losing its nerve? 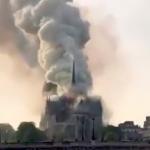 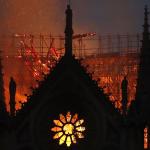 April 16, 2019 Pope Francis: 'Notre-Dame Is the Architectural Jewel of a Collective Memory'
Browse Our Archives
Related posts from The Deacon's Bench

Contraband Lipstick: Short movie reviews
In the order in which I saw them. The Rider Named Death:...
view all Catholic blogs
Copyright 2008-2021, Patheos. All rights reserved.