It was the first Sunday anyone could remember without a mass at St Sebastian’s.

A week since the bombings that killed at least 250 people, Cardinal Malcolm Ranjith, Sri Lanka’s most senior Catholic, had ordered the country’s churches not to hold services until police could be sure they would not be attacked.

In a televised mass, Ranjith delivered a homily before members of the clergy and the country’s leaders in a small chapel at his Colombo residence but in Negombo, those who could not bear to stay home came anyway.

Channa Rejunjoyne has been making candles for St Sebastian’s church for decades. He had attended mass the night before the attack. His wife and nine-year-old daughter were both there the next morning.

Now he was alone, standing outside the church gate, thumbs in his pockets, staring intensely at nothing in particular. “I feel a deep sense of sorrow,” Rejunjoyne, 49, said. “I have buried my wife and child.”

A priest had asked if he might like to come and help with the clean-up on Sunday. So he came. What else was he going to do? “There’s no one at home,” he said.

A service was held inside the gutted nave of St Sebastian’s, but was open only to priests and nuns, with heavily armed Sri Lankan navy and police guards standing at the ready outside the gate.

Near them, Lakshan Anthony was leaning on his motor scooter, head tilted, observing the place where his seven-year-old son had died the Sunday before.

“My two-year-old son is asking for his mother, but who do I provide?” he asked. She had lost an eye and was paralysed from a spinal injury sustained in the blast. 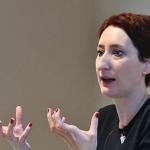 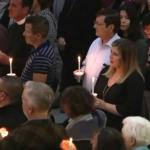 April 29, 2019 Faith Under Fire: Why They're Attacking People at Prayer
Browse Our Archives
get the latest from
Catholic
Sign up for our newsletter
POPULAR AT PATHEOS Catholic
1