Many may remember this viral Instagram photo from a few years ago:

Thank you Father Duffell for a beautiful homily as always and lunch at my pop’s restaurant. I was so moved today when you said.. “The Eucharist is not a prize for the perfect but the food that God gives us.” – Father Duffell, Blessed Sacrament Church

Now, some news about Father John Duffell, the priest in that picture:

A New York priest who told a prospective seminarian to lie to Church officials about his sexuality has been indefinitely suspended from ministry after a canonical penal process found him guilty of serial sexual misconduct.

“Father Duffell has been directed not to publicly exercise his priestly ministry due to an allegation from the past that he abused his position of authority in a violation of his promise of celibacy.”

“The allegation was made first to the District Attorney, and then brought to our attention. This allegation involves an adult; it does not involve a minor. It is important that the archdiocese take such allegations seriously,” Dolan wrote.

A source close to the priest told CNA that the allegation involved serial misconduct over a period of years.

A spokesman for the Archdiocese of New York told CNA July 6 that the priest was found guilty of the canonical crime of sexual misconduct in an administrative penal process undertaken by the archdiocese. His suspension from priestly ministry is indefinite, the spokesman said.

Duffell, 75, was ordained in May, 1969, by Cardinal Terrence Cooke. He has served mostly at parishes in Manhattan and Yonkers.

At a 2011 conference at Fordham University, Duffell told a participant to lie to Church authorities about same-sex attraction in order to be accepted for seminary formation.

“You’re not broken, the system is broken, and therefore you deal with it as a broken system; you lie,” Duffel said of the participant’s sexuality.

The priest has faced criticism for some activities of the “gay fellowship” at his parish.

In 2017, the parish “gay fellowship” partnered with the Born This Way Foundation, an “LGBT-rights” group founded by entertainer Lady Gaga, to hold a fundraising dance at the church hall.

Every week, he ends Mass by asking for first-time visitors to announce where they are from, then leads the congregation in a round of applause to welcome them.

The informational fliers for the church proclaim, “No matter your age, your race, your gender or your sexual orientation, there is a place for you at Ascension.” In his speeches each week, Father Duffell expresses the same sentiment, each time mentioning sexual orientation. The message is not lost on the parishioners, gay or straight.

“Regardless of the issue of homosexuality, I’ve always been a practicing Catholic — I took what I wanted and left the rest, so to speak,” said John Gasdaska, a 43-year-old real estate agent who has attended Ascension since he moved to the neighborhood with his partner in 2000. “But the simple fact that he includes talking openly about that makes a world of difference. There’s just no question that everyone is included in the message of Christ.”

…In some sense, the outreach and diversity in the church is a result of Father Duffell’s own religious philosophy. While some view the Catholic Church as a tightrope, he sees it as a “very broad river, with some to the right and some to the left.”

“There are some who cling to the rocks as long as they can, and others who just go with the flow,” he said during an interview in his rectory living room. 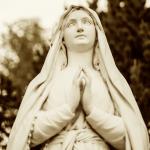 July 6, 2019
'This Is An Attack on Our Religion': Family Ordered to Remove Mary Statue From Yard
Next Post 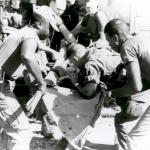 July 7, 2019 A Message for Every Priest and Deacon: 'Medics Go to Those With the Wounds'
Browse Our Archives
Related posts from The Deacon's Bench