‘It’s a grace’: As Hispanic population grows in Missouri, deacons step in

I got an email this morning from Jefferson City’s Bishop Shawn McKnight with this piece of news, via the local News Tribune:

The makeup of the Diocese of Jefferson City has shifted over the past 10 years, Bishop W. Shawn McKnight reported to the Vatican earlier this summer.

The diocese he presides over is a mix of urban and rural areas, mostly made up of rural communities. And, while the area’s population slightly increased, he stated in his “ad limina” report, the number of Catholics has slightly decreased.

Despite the decrease in Catholic population, the Spanish-speaking population within the diocese has gone from making up 4 percent of the population of the diocese to about 20 percent.

Although a significant jump, it’s not as high as the national average for the Catholic Church, he said.

Reaching that population is challenging, church officials said. So, the May 4 ordination of four primarily Spanish-speaking deacons has come at a time when they are greatly needed, said Enrique Castro, director of intercultural ministries for the Diocese of Jefferson City.

“This is the first time that we have had Spanish-speaking deacons in the diocese,” Castro said. “They are brand new.”

They each have assignments — to work in parishes and across the diocese, he added.

“Their first assignment from the bishop was the parish,” Castro said. “They also get a diocesan-wide assignment, which was to support the Hispanic ministry in the diocese. They work here in my office — which is the Hispanic Ministry.”

And, they meet regularly at the office for ongoing training.

Three of the new deacons, Nestor Montenegro, of Sedalia, and Luis Reyes and Amparo Orozco, both of Marshall, sat down with the News Tribune to discuss the evolving local communities and the diocese, following one of their meetings.

There are probably 25,000 Hispanics living in the diocese, Castro said.

Fourteen parishes in the diocese now have Hispanic ministries.

“Some are really engaged — very involved — they have masses every week,” Castro said. “Others are offering mass monthly — just starting the ministry. That’s why (the new deacons are) helping in those particular parishes.”

And there’s this example:

Father Dan Merz, pastor of St. George Parish in Linn, said the diocese maintained Hispanic ministries for years but struggled to attract Spanish-speaking Catholics it knew were in the communities.

“Now to have some home-grown vocations — permanent deacons. To add that charism to the ministry will make it blossom,” Merz said.

One of the new deacons was assigned to a parish that had about 30 Hispanics attending Sunday mass each week, Merz was told. The new deacon organized groups to go house-to-house and talk to residents. 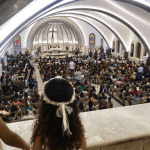 August 19, 2019 'A day of reckoning': Planned Parenthood withdraws from Title X
Browse Our Archives
get the latest from
Catholic
Sign up for our newsletter
POPULAR AT PATHEOS Catholic
1

Dark Devotional: Playing Craps with Jesus
“If anyone wishes to be first, he shall be the last...
view all Catholic blogs
Copyright 2008-2021, Patheos. All rights reserved.