As Pagans, we may or may not have a relationship with the Gods of Nature.  We may or may not live according to any particular code of ethics.  But I feel like it’s important that we don’t close our eyes to how our actions affect the world around us and the creatures with whom we share this space.

First let me say that I was raised up in a house where meat was involved with every meal.  Bacon and sausage for breakfast, ham and cheese for lunch, and the answerto the perennial question of “what’s for dinner?” was always “(MEAT!) and (veg)”  I never saw an artichoke or a fresh mushroom until I was 22 years old and had moved to California.  I’ve eaten lots of vegetarian food, but rarely anything I’d choose over a delicious steak.  So, I’m a meat-eater.

I’ve also been money-poor in my life.  For a long time, I shopped the bargain bin for meat that was close to the end of its ‘buy by’ date.  I’m pretty sure that those hogs weren’t well cared for during their lives.  But, it fed my family.

So I’m not judge-y with folks on these issues.  I understand having to choose between paying the bills or buying food and I know that organic is more expensive, organic meat even more so.   I am grateful every day that I have the choices that I do:  to keep my own animals and feed them and myself well.   I also think that, whatever our choices (or our not-choices), it’s helpful to be aware.  We are in relationship with this world; we take it into us.  It becomes us, we become it, for good or ill.

There is a continuum of non-harming when it comes to having chicken products in our lives, whether we are meat eaters or not. On the far right would be:  getting new meat chicks every year from a factory-style hatchery that artificially inseminates the hens to get fertile eggs, which are gathered and put into incubators til they hatch.  Layers are produced the same way, and if you’re using the most highly recommended breed for that purpose, you’re also replacing them every year or so because their egg laying ability goes down significantly after that.  Also, all those layer-breed eggs that hatch out roosters?  You have to get rid of them somehow; euthanasia is the kindest route, but many hatcheries put them through a grinder for fertilizer or pet food.

On the far left:   getting your stock from a local, organic breeder, keeping roosters to service the hens to make it a self-perpetuating system, raising the female chicks to replace the spent hens and letting them all live out their natural lives somewhere, which for the roosters would be outside of crowing distance so they don’t kill each other.

So that’s the process part of it.  There’s also the question of what breed you’ll use.  Up until the early 1900s, most chickens in the US lived in somebody’s yard.  There was no such thing as “layers” and “broilers”, except as Grandma chose when company was coming.  All chickens were what’s now called “dual-purpose”.  Back then, they were just called “chickens”.

But ever since humans got intimately involved with animals, there’s been selective breeding.  If you got a chick that was a mutation in some good way (bigger, faster growing, better laying, more docile), you’d keep that bird as a breeder, if you had that luxury.  When the big commercial operations came into being, specialization was the word of the day.  And pretty much just like when all other animal industry jumped up to such a large scale, chickens got the worst of the deal.  The better we (humans in general, probably not me and you) got at manipulating genetics, the worse it got for the birds, especially those raised for meat.

Today we’re going to talk about those “broiler” chickens, and I’m going to tell you something really gross.

The vast majority of birds raised for meat in the U.S. are what’s called a Cornish Cross.  This bird was developed to have a huge breast because that’s apparently what Americans value most.  The size of the breast of this bird means that they can’t mate naturally; all Cornish Cross chickens are the product of artificial insemination. Okay, that’s a little creepy, but actually a lot of large-scale production animals are done this way because it’s cheaper and safer than letting the mommy and the daddy love each other very much in person. The really bad part (IMO) is that, not only are the CCs bred artificially, they are essentially little breast-meat factories.  Part of the way this manifests is that you now have a bird that is forever hungry, and if you let them, they will eat until their stomach literally explodes.  Hey, I told you it was gross.

CCs are not only bred to be harvested at 6-8 weeks of age, they must be, because if allowed to live much longer than that, their legs will break under them and their hearts and other organs will give out because they can’t keep up with the rapid growth of the meat parts.  They can be profoundly lazy, to the extent that they die of heat stroke because they won’t move out of the sun, or thirst because they won’t walk 5 feet to the waterer.  That said, there is no other bird which will give that kind of return on investment, whether you have 500 of them or 5.  Even Joel Salatin at Polyface Farms, a well-known proponent of letting animals “express their physiological distinctiveness”, raises them for his market.

And there are ways that growth can be limited and their lack of self-preservation skills can be overcome.  I have heard of people raising them on pasture, very tiny patches of pasture, so they’re never far from their drinking water and completely out of the sun.   Some folks even say that they’re pretty nice birds, once you get to know them.  And their 6-week-to-harvest lifespan means that the price of chicken is lower.  It’s hard to argue with that, when “lower” for the small producer still means over $5 a pound. So that’s one way.

Another way is to get back to that “dual-purpose” bird that Grandma raised.  These chickens are good layers and good “meat-ers”, but they will take much longer to get to 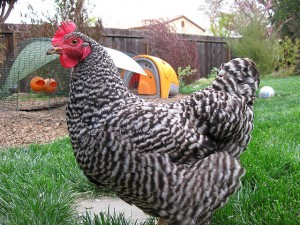 a weight where it would make sense to slaughter them.  The challenge here is that most likely you’d be only harvesting the roosters, letting the hens grow up to laying age, and since there’s only sort of a 50/50 ratio of roos to hens, that means there’s no guarantee on how much meat you’d get or when.  This works best when one has a lot of space, no restrictions on keeping those loud roos, and not much concern for the economics of the system.

Or there’s another way.

About 40 years ago in France, there arose concerns about the industrialization of poultry production because, hello France?  That’s the place where an activist sheep farmer “dismantled” a McDonald’s and became an overnight hero.  Anyway, what started as a grassroots movement led to the Label Rouge program, which lays out certain standards of breed and care.  (It’s really cool, check it out here:  http://cecentralsierra.ucanr.org/files/122130.pdf) The guidelines are pretty strict, so chicken producers got to work on breeding birds that would fulfill the diverse requirements of the Label:  no harvesting before 81 days, birds must be at least 2.2# dressed weight, no routine antibiotics, and so forth.

The birds that came of all this research are called by some arcane nomenclature that only makes sense to chicken wizards, but their descendants are known as Red Broiler, Rosambro, a few others, and Freedom Rangers (TM, I’m sure).  What it amounts to is a slower-growing, disease resistant, more independent bird which is perfectly fine on pasture and able to figure out when they need a drink of water. They are still a hybrid, so they don’t breed true.  If you put a boy Freedom Ranger with a girl Freedom Ranger, no matter how much they love each other, you won’t get a Freedom Ranger chick out of the pairing.

The number of crosses it takes to produce these chicks is something you are unlikely to be able to reproduce at home.  Essentially, this puts the farmer in the same boat as does buying proprietary seed that won’t reproduce:  you have to buy every batch of chicks from the hatchery.  But if you can’t keep roosters anyway (which so many of us backyard farmers can’t), then you’d need to do that anyway.

The best we can do, I believe, at least in our case, is to order straight-run birds (not sexed at hatching) from a hatchery whose sensibilities we trust.  So last night, after many long hours of research, I ordered 25 Freedom Ranger chicks from these guys:  http://www.freedomrangerhatchery.com/

They’re located in Pennsylvania Dutch country, and yes, they are Mennonites. 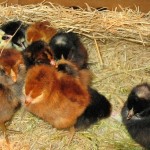 Ritual Of Hekate During COVID-19 For...
Keeping Her Keys
Related posts from Dirt Heart Witch