I’d slaughtered many rabbits before I ever even kept meat birds.  Rabbits weren’t easy either.

But in my experience thus far, prey animals have a spirit that is loosely connected.  They fully inhabit their bodies until it is time to leave it, then they go without too much fuss.  It feels very natural.

When we get ready to harvest, we do all the regular stuff:  prepare cutting boards and clean all surfaces with disinfectant; boil water for the plucking; fill the buckets with cold water; fill the cooler with ice.  Sharpen knives. 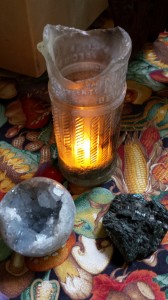 Then we light a candle.  We make a small altar with the stone that I found at the headwaters of Jenner Creek when I left my old ‘self-wedding’ band there for the Lord of all Creatures.  Matthew places a chalcedony sphere that he’s used for dreamwork.  We bless each animal, giving thanks that they feed us.  We pray over them, that the molecules of their bodies and spirits open easily apart and go on to their next incarnation with ease and joy.

Cut open their jugular veins and bleed them out.  It’s best if you use a very sharp knife so the cut is clean.  Most times the chicken will have some sort of death throes, but sometimes they hardly move at all.  Cut off the head.  There is a mess of blood.

Then it’s into the pot of very hot water.  Swish them up and down a bit to loosen the feathers then sit down to pluck.  Have a big trash can there, or some sort of bin.  Start with the wings if you can (they’re the hardest feathers to pull), but don’t worry too much about it.  The wing-tips will most likely go to make stock since there’s little meat on them.  No matter how we do it, there’s a mess of feathers.

At this point, I take them inside because I am deathly allergic to bee and wasp stings and the Yellow-Jackets just love blood and offal.

In the house, I cut off their feet, up to the yellow.  At this point, you can really tell that lizards and birds are related.  Chicken feet have scales and talons just like a tiny dinosaur.  It’s a carcass now, a once-living thing, no longer full of worm-desire, pecking-order, and get-out-of-my-nest.

Stretch out the neck and slip fingers inside the skin.  Disengage the windpipe and pull out the crop.  It’s probably full of mashed grain that she wasn’t quite done with.  This is the food that was in the process of becoming a chicken.  Cut it off and throw it out.

Starting from the tip of the breastbone, cut down to the vent and around it carefully.  You need to cut through the skin and muscle but not the guts.  Trust me on this.  If you smell chicken poo while you are doing this, you will not forget it, even if the meat stays clean.  It makes it hard to eat.

Reach your hand inside the cavity and pull out the intestines, liver, heart, gizzard.  Throw out the intestine and the vent.  Pull the little green bile duct off the liver oh-so-gingerly.  If you burst that little sac it will taint the meat and you will finally understand why “bile” used to be considered the source of anger and violence.

You will recognize the heart.  It looks like a tiny human heart with valves and all.  It beat very quickly when it was in the chicken’s chest, faster when it heard the cry of a hawk, or the bark of a dog.  There might still be blood in it; if you squeeze it, you’ll find out.

The gizzard is pretty much a handful of solid muscle.  If you look carefully you’ll see it has two lobes with a white tissue between.  Slice down through that and open it like a butterfly.  Inside will be more grains in various stages of groundedness and hopefully some little stones.  If there are no little stones, your chickens need more grit.  You can buy mineral grit at the feed store which also includes calcium to help with egg production and shell strength.  Or you can let your birds wander around the yard for grit, give them leafy greens, and grind up their eggshells into powder and sprinkle it on their food.

Back to the gizzard which has been butterflied:  rinse out the stones and grain.  You’ll see on the inside a sheath of yellow.  Get your fingernail under the edge of it and peel it off.  Pop the gizzard, heart and liver into a pan with lots of butter.  One way we honor the birds is to eat these parts right away.  It’s not a hunt and we don’t expect to gain the powers of our flock by ingesting them, but it feels like there’s some sort of balance there.

A chicken’s lungs are attached quite well to the ribs.  They are a darker solid pink.  They used to push air up and through the throat to let everyone know that something was wrong, or right, or simply strange.  No air in them anymore.  Scraping with fingernails is one way to get them out, but you can also use a ‘lung-scraper’ or a strawberry huller.  These are not good to eat.  Throw them out.

Cut off the tail (known in some circles as “the parson’s nose”, but also in other countries as “the sultan’s nose” or “the pope’s nose” or any other figure who might be considered to have their “nose in the air”).  OR don’t cut off the tail, just the oil glands at the top of the tail, where it connects to the body of the bird.  The chicken used to brush that oil through hir feathers, preening.

Rinse the bird well inside and out.  If you cut it into pieces it will fit better in a freezer bag or a small crock pot.  Freeze it for up to a couple of months.  Or cook it right 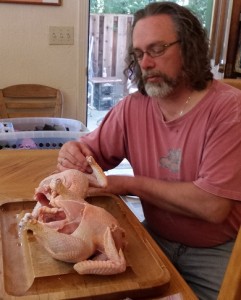 away with any number of amazing chicken recipes, but try at least one that has minimal seasoning and keeps the meat on the bone.  Maybe roast it, so it still looks something like the chicken that you raised up from a hatchling.  When you eat it, give thanks for the bird, the bugs it ate, the greenery.  Give thanks for the brilliant system by which the food we eat becomes our bodies.  Give thanks for the hands that refilled the water dish and moved the heat lamp and delivered the feed; that opened the vein and took the life.  Give thanks for your own courage.

Here is a good (and VERY graphic) photo essay on butchering chickens:  http://foodwaterandfire.ludlowsurvivors.com/chickenkill.html 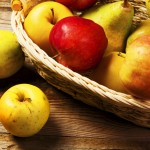 September 16, 2014 Wheel of the Year~Autumn Equinox at the Homestead
Recent Comments
0 | Leave a Comment
"Meaningful. I used to run along wild paths, which was a meditation in that I ..."
Michel A Guided Journey to Meet the ..."
"Yes. I hear you. As I believe so many of us do right now. The ..."
The Divine Feminine App Some Imbolc Advice from One of ..."
"Beautiful. I have added to the divine feminine app as a Resource. Thank you."
The Divine Feminine App A Guided Journey to Meet the ..."
"It is an amazing event. Small but mighty!"
Jenya T. Beachy Come to Hexenfest ~ A Witchy ..."
Browse Our Archives
Follow Us!