When Animals are Brutal Jerks

Recently, as y’all know, we brought home a bunch of turkeys.  I wrote about it here.  There was a bunch more to the story that I hadn’t written about.  Here it is. 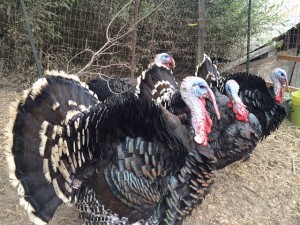 We had 6 toms to begin with and 4 hens.  One of the toms sustained an injury on his travels somewhere and he was slaughtered within a week.

5 males and 4 females.  Not an good situation for anyone.

The toms were very noisy and pushy with each other.  When they disagreed, they’d grab and peck the comb and/or the wattle of their opponent and pull and pull.  There was blood more than once.  It was brutal.

One day, I saw one of the toms trying to mount a female, climbing on top of her and struggling to stay up there.  Now, these birds were not made for natural mating.  They were a commercial, fast-growing breed and a product of artificial insemination.*  So nothing was going to come of this longing for union.  The boys were physically incapable of making the connection.  But they tried and tried.  And fought each other over it, and kept trying, and the females would just ‘assume the position’:  on the ground, wings spread for balance.

Seeing this interplay between the males and females made me furious!  I yelled at the boys and sprayed them with a water hose.  Nothing.  I screamed at them and pushed them off the girls.  They’d come right back and do it again.  And again, the females would lay down for it.  I yanked them apart and found blood on my hand.  Looking closer at the hen, I saw big gashes on her back and under her wings from where the tom was gouging her, trying to do his business.  Checking on the other hens, I found the same injuries.

Infuriating.  Triggering.  So much of my own personal baggage got flung open and it was still a mess.  I was mad at every male who ever climbed on top of any female.  I was mad at every female who laid down for it.   I was mad that the natural world was full of this insane drive that caused such pain.

I got a little crazy.  Locked the boys away in the coop and told Matthew:  That’s it.  Those guys aren’t coming out until slaughter day.

Slaughter day got moved up.

I knew that I could not approach this task with such rancor in my heart for these birds.  I purposefully looked into the baggage of my old travails, pulling out events and ideas and deciding whether they still fit.  If they were worth keeping.  Some were and some were not.  But I was able to disconnect my personal experience from the birds’.

On the day of, it was my job to hold the toms’ bodies still while they bled out.  I felt their heartbeats slow and their bodies tremble with the last electrical impulses.  I felt my own fear and pain draining away as well, as I cried and cried for all the cruelty perpetrated on any female by any male.  It was cathartic and freed up so much energy for me.

I don’t really recommend using an animal’s death for one’s personal spiritual or psychological healing, unless that is a specific part of your tradition.  But I know that, in this case, these creatures’ actions pulled some stuff off the shelf for me, and it was a great gift to receive this teaching.

Now the girls are healing, slowly.  They do pine for the toms, though, like a part of their culture is missing.  There is much to learn from this, but what it is, I haven’t figured out yet.

*The jury is still out on commercial breeds vs. heritage breeds.  Like with chickens, there are certain lines that are literally designed to grown fast and in a certain shape.  It ain’t natural, for sure.  However, with chickens, you can use Freedom Rangers, a middle-ground bird.  Not so with turkeys, at least at this point in time.

**We did decide to keep one of the toms, which worked out for about 2 weeks, until I saw that ALL BY HIMSELF he continued to injure the all the females.  Now he’s in the freezer too.

All these images were taken by me, myself, and I. 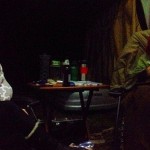 October 16, 2015 No Answers
Recent Comments
0 | Leave a Comment
Browse Our Archives
get the latest from
Dirt Heart Witch
Sign up for our newsletter
POPULAR AT PATHEOS Pagan
1