A lunchroom discussion on suggestions for suitable relaxing reading to bring along on a Mediterranean holiday, soon turned its attention to RJ Snell’s Acedia & Its Discontents, which was used as a focal text in a course at Campion College Australia on theological anthropology.

The discussion hinged on a point made in the book that the heart of the sin of sloth was not laziness but autonomy, a point made in a previous post. To this point an incisive question was posed: if autonomy lies at the heart of acedia, then is there then room to consider any kind of freedom that is not slothful? Must all action be directed in minutiae in order to avoid the vice of acedia?

It took a while for an answer to come from within the context of the book itself, till it dawned that Snell’s book implicitly highlights an assumed juxtaposition that we living in the twenty-first century often have at the back of our minds: the juxtaposition between freedom, order and hierarchy. We thus too often associate freedom with autonomy, as well as too easily associate autonomy with an absence of order and hierarchy.

To this juxtaposition, Snell makes use of the image of Adam’s naming of the animals, recorded in the second chapter of the Book of Genesis. In the biblical text, God stood back and waited to see what Adam would name the animals, giving Adam the freedom in his dominion over the animals. Nevertheless, this naming was not done wontonly, but was set within the context of a hierarchical relationship between man and God, and an order of creation that was established by God. Adam’s freedom in the naming of the animals was virtuous (in the Thomist sense of the term), precisely because virtue was a means to working within a recognised order, and finding one’s telos and purpose within that order.

By contrast, Snell highlights that autonomy, an outworking of acedia, was predicated on a refusal to submit to any order prior to a creature’s will. Indeed, Snell argues in his book that the vice of sloth emits precisely from the overthrow of the order of creation, such that man would become his own source of order, and create ex nihilo rather than find one’s telos and purpose.

This point then makes it clear why, in the medieval definition of the seven vices, the vice of sloth is closely associated with the vice of pride, because at the heart of sloth lies the overthrow of one’s status as a creature, and become, as one serpentine theologian once put it in the third chapter of Genesis, “become gods yourselves”. 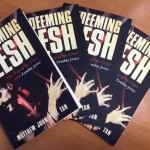 July 13, 2016
Coming Soon: The Way of the Cross with Zombie Jesus
Next Post

What Not to Say to a...
Steel Magnificat
Related posts from The Divine Wedgie