Does The Dark Knight Still Shine? 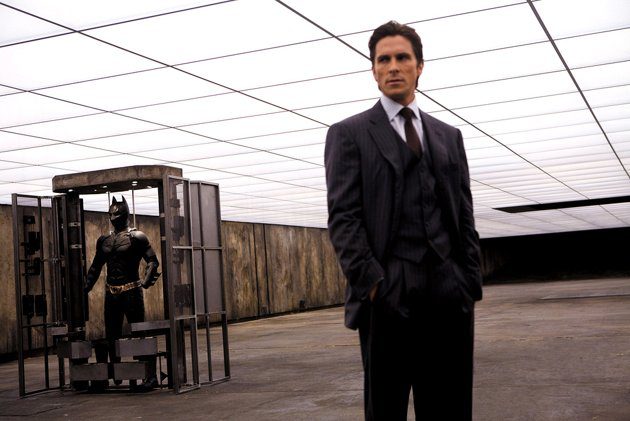 Four years ago, I raved about The Dark Knight.  My enthusiasm for Christopher Nolan’s epic Batman saga was so boundless, it took two days of reviews to contain it.   I called The Dark Knight the best film of the decade.   But given some time and space, I wonder if Nolan (and the audience) fixate too much on The Joker.   Does Heath Ledger’s galvanizing performance overwhelm the movie?   What do you think?  Does the film (and my review) hold up?

The Dark Knight is the most ambitious and satisfying comic book movie ever, an instant classic.   It thrills and chills, combining massive spectacle with timeless questions regarding our humanity.  In exploring our disturbing depths, director Christopher Nolan attains unparalleled cinematic heights.   It is a feast for the eyes and a challenge to the brain.   While Batman battles the Joker for the soul of Gotham City, Nolan pulls audiences into the rarest of responses to a Hollywood blockbuster:  genuine introspection.  It is a soulful adventure.   The Dark Knight explores the cost of combating evil.   How many rules are we willing to break to maintain order?   How many freedoms will we sacrifice to reign in chaos?   The Dark Knight calls us to give an account. 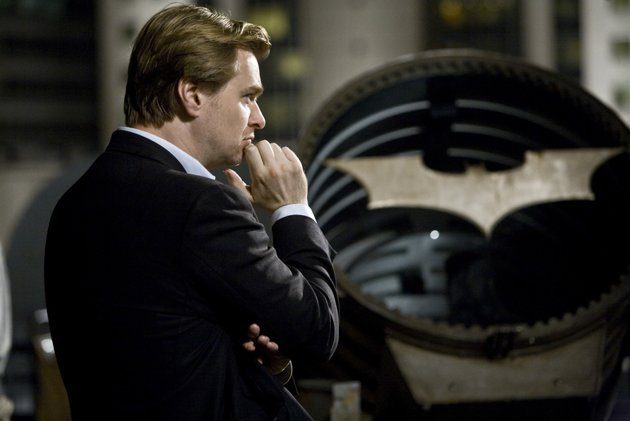 The Dark Knight is a work of heroic imagination.   Crafting the screenplay with his brother, Jonathan, Christopher Nolan cements his position as the best director of the 21st century.   In my new book, Into the Dark, I examine why no filmmaker has placed more movies atop the IMDb’s list of the top films of the 21st century.   Nolan documents our capacity for duplicity with unflinching honesty.   The Dark Knight pushes past the indifference that often accompanies the summer popcorn movie.   But Nolan disturbs our peace out of confidence rather than contempt.   He trusts the intelligence of of his audience.   Consider the dense, complex plot.   Nolan never slows down to explain the multi-leveled machinations of Gotham.  He expects viewers to catch up (or at least return for multiple viewings).   The Dark Knight is an antidote to the cynical and soulless fourth Indiana Jones film that started this summer of sequels.   That digitized disappointment was drenched in empty nostalgia.   While Lucas and Spielberg count their first dollar gross, Nolan exposes the cost of wrestling with madness.    He wraps the sickness in our souls within a visceral popcorn movie with shocking relevance.

The bank robberies, skyscrapers assaults and high-speed chases in are all top notch.  Nolan employed IMAX cameras that offer even greater detail in these breath taking action sequences.   Yet, these comic book characters occupy a real world beyond digital effects.   We feel each punch, scrape, and crash.   The particulars of Chicago are also retained, right down to the Illinois license plates.   For a film about organized crime syndicates, Nolan has wisely highlighted the reality of his locations and stunts.  We’re exhilarated by the Batpod because its wheels and its path take place among us, in a city we recognize. 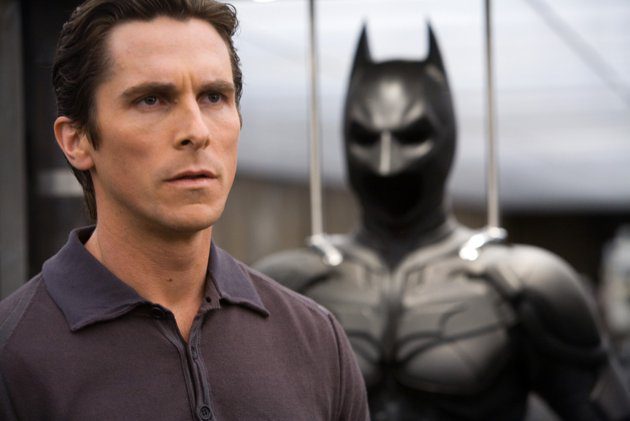 While the action pops, the acting gives The Dark Knight such punch.   As Bruce Wayne, Christian Bale seems suitably disturbed by his own behavior.   The scars on his body begin to take a toll.   Batman’s surprise attacks are made possible by his haunting stillness.   What is going on behind Bruce Wayne’s playboy mask?   Has Batman descended to his enemies’ level?    His relationship with Rachel Dawes hints at buried hopes.   Is peace possible for Batman?   We understand why Rachel seems unwilling to wait.   Maggie Gyllenhaal makes us feel every chamber in Rachel’s divided heart.

As the Joker, Heath Ledger goes to a dark, haunted place.  The Joker describes himself as an engine of chaos.   He tortures and maims his victims for sport rather than profit.   His twisted motto decorates a tractor trailor:  “Slaughter is the best medicine.”   Like other terrorists we’ve known, The Joker preys upon society’s outcasts, offering them a co-starring role in his anarchic play.   But they turn out to be pawns in his fun and games.

What makes Heath Ledger’s performance so heartbreaking is the compassion he extends toward the Joker.   This scarred scourge arrives on the scene already damaged, devoid of a name or a backstory.   He changes his biography depending upon his victim.    Whether he was tortured by his father or spurned by his wife, The Joker stands in for everyone who has come unglued via abuse.    Ledger’s poignant performance comes on the heels of Oscar winning portraits of evil by Javier Bardem in No Country for Old Men and Daniel Day-Lewis in There Will be Blood.   The Joker unsettles like Anton Chigurh or Daniel Plainview, but is even more compelling.    Some may link Heath Ledger’s tragic demise to his over-identification with The Joker.   Maybe he injected too much empathy into his portrait of evil.   He felt too deeply.

The most haunting shot of The Dark Knight is nearly silent, as the Joker leans out the window of a stolen police car, his greasy hair blowing in the wind.    Law and anarchy converge in one exhilarating and chilling moment.  Rest in peace, Heath.

The Dark Knight’s moral dilemma plays out in the choices of district attorney, Harvey Dent.    He stands as the symbol of hope in Gotham.   The people’s faith is embodied in his campaign slogan, “I believe in Harvey Dent.”   He asks an all too familiar question, “Should we give in to terrorist demands?”   Harvey stands firm, inviting us to believe that “The dawn is coming.”    His campaign to clean up Gotham has echoes of the faith extended to Barack Obama.   Does he represent genuine hope or the beginning of disappointment for the next generation of voters?   We need heroes, but what if they don’t deliver?  How quickly will we turn and become two-faced? 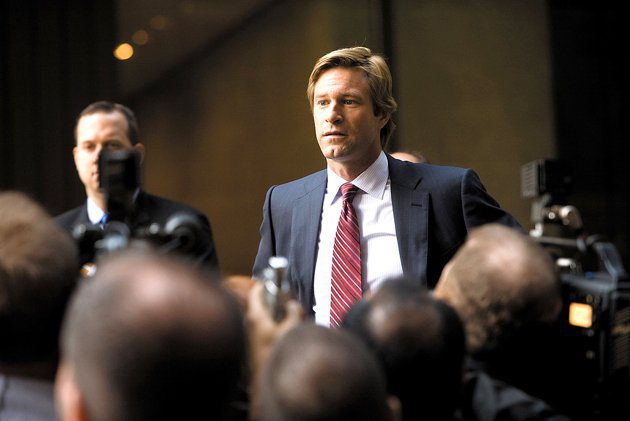 As Harvey Dent, Aaron Eckhardt avoids his tendency to overplay his hand.   His character may unravel as randomly as a coin toss, but the steps are built carefully.  Perhaps the confidence and depth of the supporting cast resulted in Eckhardt’s understated performance.   Gary Oldman owns his scenes as Lieutenant Gordon.  Such quiet dignity commands our attention.   Same for the twin pillars in Bruce Wayne’s life, Alfred the Butler (Michael Caine) and tech advisor Lucius Fox (Morgan Freeman).   When they speak, we all listen carefully. 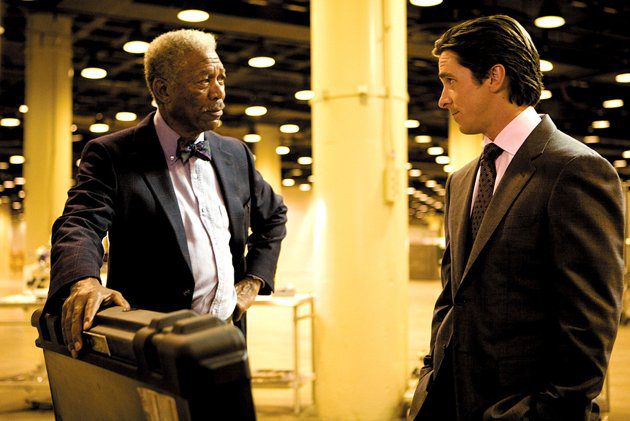 These faithful mentors challenge Bruce Wayne to consider the cost of his war.  Alfred reminds the Batman that evil will rise when it is attacked.   Reason is often the first casualty of such wars.   Bruce must consider whether the Joker “is a man you don’t understand.”   To illustrate, Alfred reflects upon his life during combat in Burma.   How do you disarm those who “just want to watch the world burn?”   Alfred’s experience has echoes of the Vietnam War when we burned villages in order to save them.  Late in the film, the ethics of wiretapping arise.   Lucius Fox bristles at the thought of spying on 30 million people.  But Batman holds up the importance of this particular case.   Just as pastor Dietrich Bonhoeffer was willing to assassinate Hitler, so the Batman challenges Lucius to sacrifice freedoms to eliminate a larger threat.  Christopher Nolan resists the temptation to underline the parallels to our war on terror.  We’re left to apply the post 9/11 connections at our own discretion.   May Nolan’s faith in the audience be rewarded.

For complete coverage of The Dark Knight Rises, check out the Patheos movie page here.

July 18, 2012 The Dark Knight vs. Lord of the Rings: Best Trilogy?
Recent Comments
0 | Leave a Comment
Browse Our Archives
get the latest from
Doc Hollywood
Sign up for our newsletter
POPULAR AT PATHEOS Entertainment
1