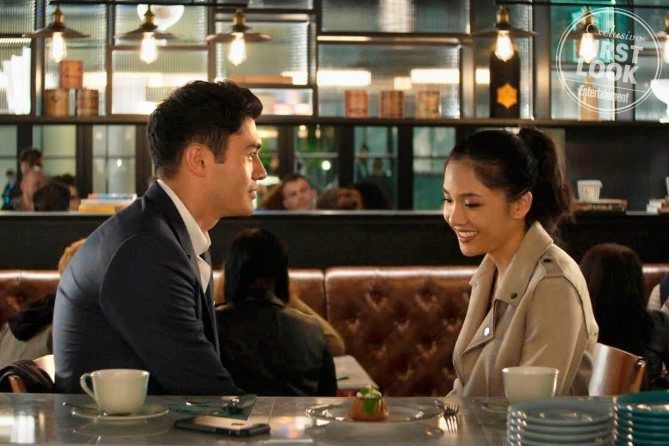 Crazy Rich Asians has become the most popular romantic comedy in years.  Not since “Pretty Woman” (in 1990!) has a rom com topped the American box office for three weekends in a row. This remarkable reception is an overdue affirmation that moviegoers (and finally, maybe even Hollywood) see Asian actors and stories as significant and worthy of investment.  In an era when questions of identity dominate academia and social media, Crazy Rich Asians overcame massive expectations.  Imagine the pressure on the cast and crew when film studios have only offered such an opportunity once a generation. Director John M. Chu and his talented cast rose to the occasion, delivering laughter, romance and a refreshing range of representations.

Crazy Rich Asians is dedicated to upending or at least expanding our understanding of how Asians live and work, play and pray.  Viewers are whisked from the academic confines of NYU to the glittering streets of Singapore.  What a perfect backdrop for rising Asian stars to shine, from Constance Wu (from the ABC sitcom Fresh Off the Boat), to Malaysian TV host Henry Golding and his fabulous abs of steel.  As Rachel and Nick, they are gorgeous, intelligent, charming, and complex. We all want to see characters who resemble us enter into vexing dilemmas and make wise choices.  Aspirational images are important for kids of all ages to see on their array of screens.  The love lavished upon Crazy Rich Asians corresponds to the pent-up longing to see roles move beyond tired stereotypes.  For those burdened as a ‘model minority’, what relief to discover that Asian families can be petty, conniving, and maddening, too! 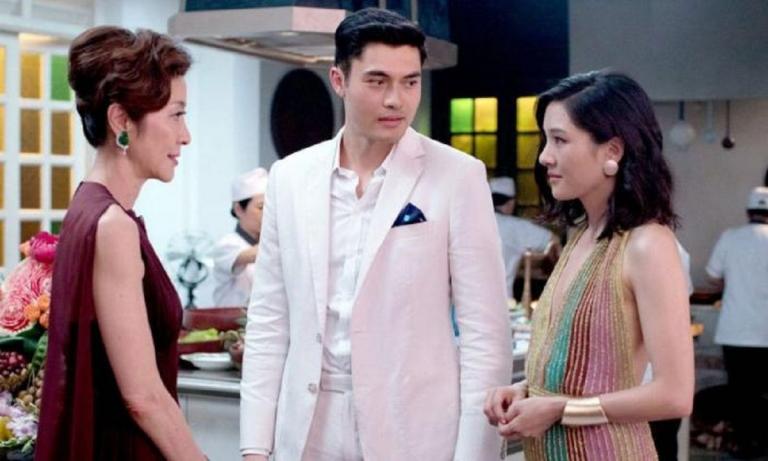 Crazy Rich Asians does a great job of placing the familial ties in Singapore into conflict with the individualism that the American economic and educational system promotes.  Can Chinese values in the east be married to the personal expression endemic to the west?  The power plays between Rachel (Constance Wu) and Nick’s mother, Eleanor (Michelle Yeoh) are a consistent delight. They demonstrate the layers of class and cultural conflicts within the Chinese context, let alone so many different kinds of Asian communities. Singaporeans who aren’t Chinese have valid reasons for wondering when their stories will be told with equal affection. And what about the many ethnicities contained within China itself?  We need far more than one Hollywood film to reflect the diversity and wonder found across 40% of our global population.  Crazy Rich Asians offers us the rare opportunity to eaves drop on issues of shame, honor, and individualism within a single extended family (who happen to be billionaires!).

The scene that aroused my curiosity arrived early: when we drop in on a Bible study within the palatial home of the Tai family. (Kevin Kwan’s Crazy Rich trilogy began with a poem he wrote in college entitled “Singaporean Bible Study”.) Fierce matriarch Eleanor Young and her fellow aunties are reading Paul’s Letter to the Colossians while updating each other on rumors regarding Nick’s date for an upcoming family wedding.  Some viewers may be surprised to see Christianity associated with wealth, power, and status in Singapore.  And yet, Eleanor reads, “So if you have been raised with Christ, seek the things that are above…Set your minds on things that are above, not on things that are on earth.”  The discrepancy between their opulent lifestyles and these heavenly virtues is quite apparent.  Asian Christians deal with many of the same tensions and temptations that American churches struggle to address.  How to follow the sacrificial way of Jesus amidst such affluence.

But in this scene, we also are being invited into a discussion of family honor.  What if a New Yorker like Rachel Chu shames a clan that has fled oppression and worked diligently across the generations to forge a bright future for the Young, T’sien, and Shang clan?  Eleanor wonders how American an Asian Rachel might be. The plot explores the tension between loyalty to the family and personal pursuit of the vagaries of love. 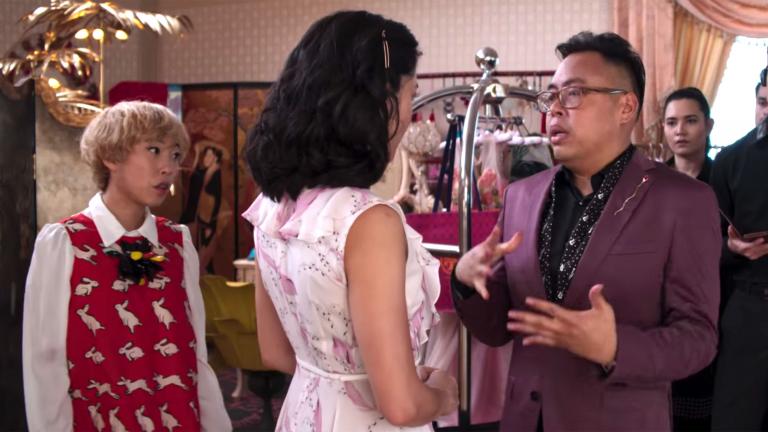 Crazy Rich Asians may be the most successful romantic comedy since Pretty Woman because it expands the Cinderella formula from fantasy into genuine cultural tensions.  Yes, Rachel may not be as regal in her upbringing as Nick.  And perhaps her single mother couldn’t afford to dress her in the most stylish gown.  We wouldn’t necessarily consider Awkwafina a fairy godmother (although her hot pink Audi R8 makes a pretty effective chariot).  The extreme makeover that Oliver T’sien [the charming Nico Santos] oversees is definitely magical.  But the dramatic bind that Rachel finds herself within is rooted in genuine social, economic, and cultural chasms. 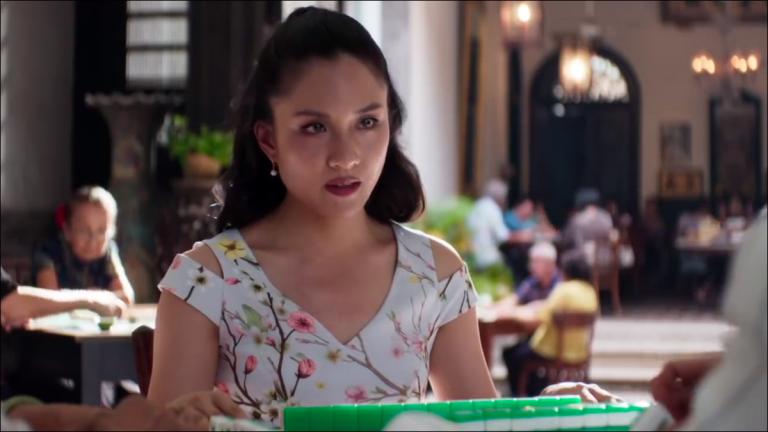 Crazy Rich Asians pivots upon Eleanor’s ability to reconcile her expectations for a future daughter-in-law with Rachel’s love for Nick.  While Rachel is used to passing tests and performing at lofty levels, nothing seems to satisfy Eleanor’s demands.  The conflict builds to a showdown at a mahjong parlor. Their dramatic mahjong battle turns when Rachel discards the tile (and power) she holds in her hands, allowing Eleanor to claim a pyrrhic victory.  Rachel lays down her expertise in game theory.  Winning this match would mean losing Nick.  Such sacrificial love cuts through Eleanor’s defenses and calls her toward those “things that are above” that dogged her throughout the story. 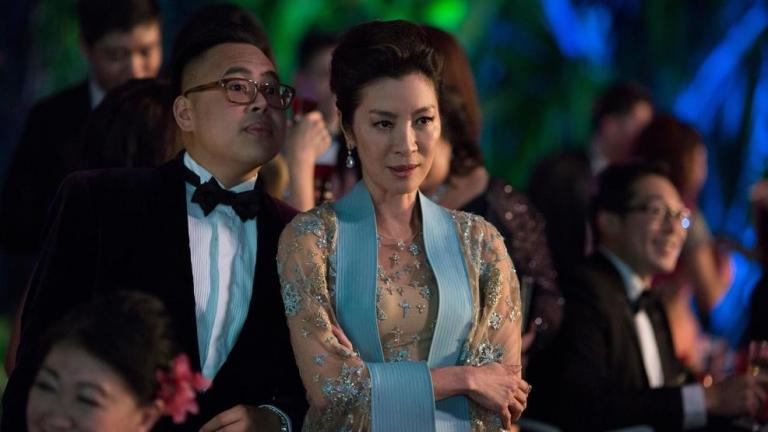 Smart movies manage to imbue remarkable power into a single prop or gesture. I got misty-eyed when Eleanor ultimately makes her own engagement ring available to Nick to place on Rachel’s finger.  That ring conveys the full blessing and acceptance of the Young, T’sien, and Shang clan. The tensions of marrying for love and honoring the family have been resolved.  The beauty of Crazy Rich Asians is not just in the clothes, cars, and cast, but in the reconciliation that occurs between east and west, individuals and families, beliefs and practices.

December 28, 2018 Refresh to Impress: The Best Genre Films of 2018
Recent Comments
0 | Leave a Comment
"This was so well-written. I couldn't put my finger on all that the ring symbolized, ..."
Julie Dennis Olson RECONCILING CULTURAL TENSIONS IN CRAZY RICH ..."
"First of all i want to thank you for providing such a wonderfull information and ..."
Baizid Latif THE FINEST FILMS OF 2019: COUNTER-NARRATIVES
"Thank you for the list!"
NCMormon The Finest Films of 2018: Dignity, ..."
"Absolutely love the movie! http://www.iwmbuzz.com/"
Neha Shah RECONCILING CULTURAL TENSIONS IN CRAZY RICH ..."
Browse Our Archives
get the latest updates from
Doc Hollywood
and the Patheos
Entertainment
Channel
POPULAR AT PATHEOS Entertainment
1