Billy Graham was a World Changer. You can be one too.

Billy Graham was a World Changer. You can be one too. February 26, 2018 Dr. Laurel Shaler

Shortly after returning from my first speaker and writer conference over 5 years ago, I was catching up with one of my mentors. As we sat on her couch sipping tea, we talked about my experience of being surrounded by many women who felt called to speak or write professionally. While there was no competition involved, it was still intimidating. I couldn’t imagine how God might use me – or why he would want to – when there were so many others to fill the role. So many people whose gifts and talents in those areas far surpassed mine. My mentor, who has been in my life for well over two decades, offered the gentle reminder that God will use whomever He has called. Not everyone at that conference – or any other – will be as well known as Billy Graham. If I were a betting woman, I would say that no one at that conference will be as well known as Billy Graham. We won’t all be famous evangelists or apologists. We won’t all speak to millions or thousands or even hundreds…leaving untold numbers of people on the edge of their seats ready to jump up, run down the aisle, and repent of their sins. We won’t all be New York Times best selling authors either. 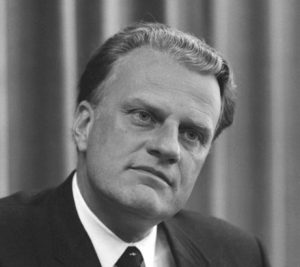 But we will all speak to people. Most of us will speak to people every day. How we use those conversations can change the world. It’s like the well known story of the man walking down the beach throwing starfish that had washed ashore back into the sea. His young grandson asks why bother since he can’t help them all. His grandpa’s wise response? After tossing one more back in the ocean he replied, “No. I can’t save them all. But I just saved that one.” If only more of us thought like that – instead of doubting ourselves because we may not impact a huge number of people, we can be confident that we can make a huge impact on whomever God places in our path. You don’t have to be Billy Graham to do that. But, like Rev. Graham, you can run your race confidently as you point others to Jesus, no matter your place in this world. Whether it’s speaking from a stage blinded by a spotlight behind which sit thousands or sitting across a coffee table with a hurting lost friend. The world needs a whole lot more folks willing to share the Gospel of Jesus Christ. There’s you. And there’s me. There are lots of other Christ followers too. There is no doubt that Billy Graham was a  one of a kind world changer. But, you know, you can be a world changer too. Simply start with one starfish – I mean, person – at a time. 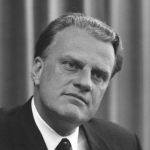 That's Not How Any Of This...
Preventing Grace
Related posts from Dr. Laurel Shaler