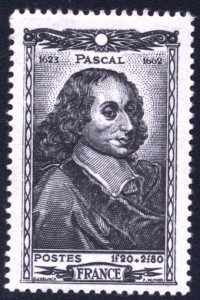 As we pointed out last week, Pascal’s actual scientific and mathematical work has been far surpassed. We may like stories about Euclid and Galileo, Newton and Leibniz but we don’t usually come across them in the Google rankings of “most quotable.”

In fact, for a scientist/logician/mathematician, Pascal has a remarkably unscientific reputation among many contemporary French people. Those whose knowledge of Pascal’s ideas may be marginal but who have some sense that his contemporary, Descartes, was a hard core rationalist may speak flippantly about whether a person is “Pascalian” or “Cartesian.” (You have to say those words with a lyrical beginning and a nasally ending. Try it now… I’ll wait.) Forget the Myers-Briggs personality scale; forget the Enneagram. There are only two kinds of people: a Pascalian—purely intuitive, imaginative, and slightly irresponsible; or a Cartesian—rationalist, logical, and orderly.

Let’s just say that Pascal probably would have been disappointed in this legacy, for he firmly believed in the power of reason. He simply understood its limitations. As he once wrote, “Reason’s last step is the recognition that there are an infinite number of things which are beyond it. It is merely feeble if it does not go as far as to realize that” (f. 188)*

A true rationalist, Pascal might argue, is one who, without any illusions, understands that rationalism does not yield comprehensive, universal knowledge. That is, our ability to think clearly and effectively about the world can reveal a great deal, but it cannot tell us everything we might wish to know. There are some things–some realities–that cannot be explored through our minds.

The Enlightenment thinkers, hovering on Pascal’s horizon, and their heirs (among us today in the form of many scientific materialists and metaphysical naturalists) all would snort in derision. For them, the world is an open book, and while we may not yet be able to read it fully, it is essentially accessible by the intellect. The possibility that there is genuine knowledge which the intellect cannot grasp–in part or in full–but which can be acquired through another human aptitude is the question.

So yes, indeed, Pascal was a rationalist as far as rationalism can go. Far from a dreamy idealism, Pascal’s thinking was clear, bold, and challenging. He stood out amongst his peers in radical ways… which got him in more than a little trouble. And to understand his enduring message, we need to understand the peers, the trouble, and the challenge. (Ready for a little French history?)

* [Now, a note here about citing Pascal is in order. Pascal’s most famous work is called Pensées, which simply means “thoughts.” It isn’t a completed work in any sense, merely a compilation of notes that he was making for a book he intended to write. He died before he could actually write it. So the notes are all numbered, and we call those notes “fragments.” When you cite a pensée, you put the fragment number in parentheses at the end. As above.

One of the more confusing parts of studying Pascal’s Pensées is the discrepancy in editions. Translators in different eras have ordered the fragments differently, and thus if I cite fragment 188, it’s only #188 in the Lafuma edition. It’ll be something else in, say, the Sellier edition. Bother! So, if you’re following along in this conversation and want to look up fragments as we talk about them, it’ll be helpful if you have the same edition/translation. I’m using the Penguin edition, following the Lafuma ordering.]

January 8, 2013
Becoming Neo-Pascalian: An Introduction, from Cones to Gambling
Next Post

January 21, 2013 Becoming Neo-Pascalian: The Back Story
Recent Comments
0 | Leave a Comment
"Are u 100% sure Chp 42 already in that website??WR.MAANSHAN.INFO/P9721q"
Threetails The Ruins of Formation
"Now THAT'S chapter 69 for ya ;)NL.2633R.US\A9721nv"
gene303 A Pre-Advent Invitation: Sitting in the ..."
"and claude is also still sleeping :(lr.DAOFI.CASH/Y9721uW"
Gvwyu Jesuitae: Lessons from Ludolph
""
HungryWaffl3 Jesuitae: Lessons from Ludolph
Browse Our Archives
Related posts from Dry Bones