Becoming Neo-Pascalian: An Introduction, from Cones to Gambling

Pascal, this unusual 17th-century giant, seems to be poised to speak again from a distance to a 21st-century generation feeling pulled in multiple directions. While Pascal’s life was unusual for his age, he seems oddly a man of our time in many ways. Most common people of the 17th century had very limited exposure to cutting edge science, philosophy, or mathematics.

[There was, however, lots of “cutting edge” religion to go around, though the cutting edge part was not metaphorical much of the time. Religious matters were often cause for violence throughout Europe. Born in France in 1623, Pascal surely grew up hearing the sordid tale of the St. Bartholomew’s Day Massacre, fifty-one years earlier, of thousands of Protestants (some estimates of 30,000 or more) by raging Catholics afraid of Protestant political power.]

Yet here we come across, in one person: Man of letters. Scientist. Mathematician. Philosopher. Christian. Radical. Nonconformist. Social activist. Mystic. Realist. And while you might protest that you’re nothing like that, you probably engage in several of the following: balance your checkbook with a calculator and perhaps even run reports on Quicken; understand the basics of computer functions; post comments (some even philosophically minded) on Facebook; write letters to the editor of your local newspaper; care about services for the poor; read on economics, spirituality, scripture, politics; or listen to Science Friday on NPR. You’re exposed to religious rhetoric between evangelicals and progressives; you’ve heard of the Higgs Boson discovery; you voted for a political platform according to your perception of society’s well-being. You pray, you hear the stories of scripture, you care deeply about community, and maybe, just maybe, you’ve had a transforming spiritual experience—fleeting, mystifying, elusive—that you can’t describe but you’ll never forget.

Given the gap in history and culture, you actually have more in common with Pascal than he did with most of his compatriots.

So, if we let him speak to us, what might he expound upon? Conic geometric theory, which he developed and published before he was twenty years old? (Okay, so I’m not so terribly like him in that area! Cones … street obstacles, what dogs wear after some kind of surgery, bearers of ice cream, hmm…) Perhaps the idea of a vacuum in space? (And we’re not talking about Dyson carpet cleaners, but the possibility of actual emptiness or void versus the possibility of an invisible ether filling the universe.) Maybe probability theory? This might come in more useful if we’re counting on winning the lottery. Pascal actually worked on probability theory because of his gambling habit. It helps to have some understanding of the chances of throwing the winning combination in a pair of dice. (But I’ve never played craps, so it would only be useful in my clandestine Yahtzee life, so we’ll let that pass, too.) 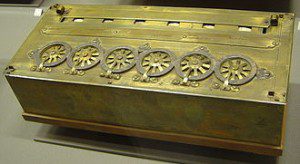 Pascal’s father was a tax assessor, and watching him struggle with numbers led him to develop the first primitive calculating machine. (Math majors everywhere should stand and salute. No, on second thought, it’s not the math majors that need his idea; it’s the rest of us who still use our fingers.)

He was also very concerned about the struggles of the Parisian poor (who were clearly still around in the early 19th century, as you’ve seen in Les Miserables). While the wealthy had private carriages, with horses to draw them, the poor had no form of transportation except their own two feet.  Thus Pascal put into place a system of public transportation for the common individual to get across town. (Sadly, he was before his time, and the service only lasted a decade.)

Pascal also took a great deal of pleasure in writing a series of anonymous letters making life miserable for the Jesuits who, at the time, were charged with moral laxity and political compromise. Pithy and painfully pointed, the Provincial Letters made the Jesuits howl for revenge.

All of that is mildly interesting as history, but it’s not the thirst for history that makes people today find Pascal so compelling. Something about his work, his writing, his passions are keenly present to us all. What is it about Pascal that generates ongoing debate and interest?

“This is a scientist gone from the scene twenty years before Newton’s Principia Mathematica, one hundred years before Joseph Priestley’s work on electricity, one hundred fifty years before Lamarck’s early works on evolution, and two hundred years before Jean Bernard Leon Foucault measured the speed of light. This is a philosopher whose work would be overshadowed by the likes of his contemporary Rene Descartes; Gottfried Leibniz of the next generation; David Hume and Immanuel Kant of the next century; and then misunderstood and summarily dismissed by many of the thinkers of the nineteenth century…. This is a Christian apologist whose memory bore two stigmas, that of his apparent skepticism and that of his reputed Jansenism, neither of which made him useful to the [Catholic] Church….This is a royal subject, unsuspecting of the power of revolution and the possibilities of republican politics, incapable of conceiving of life without a throne or a crown, and without the ever-present religious leaders bending to speak into the royal ear.”

And yet his voice persists. And speaks in a contemporary voice. How?

January 15, 2013 Becoming Neo-Pascalian: A Personality Quirk?
Recent Comments
0 | Leave a Comment
"Are u 100% sure Chp 42 already in that website??WR.MAANSHAN.INFO/P9721q"
Threetails The Ruins of Formation
"Now THAT'S chapter 69 for ya ;)NL.2633R.US\A9721nv"
gene303 A Pre-Advent Invitation: Sitting in the ..."
"and claude is also still sleeping :(lr.DAOFI.CASH/Y9721uW"
Gvwyu Jesuitae: Lessons from Ludolph
""
HungryWaffl3 Jesuitae: Lessons from Ludolph
Browse Our Archives
Related posts from Dry Bones

The Power of Being A Validator And Having...
Who is a validator? A validator is one who validates, or one...