Becoming Neo-Pascalian: The Back Story

Okay, this week we’re diving into French history, which might not be your cup of tea. But I’ll try to make you feel it was worth your while.

If we back up a bit to the 16th century, we find France undergoing seismic shifts in economy, religion, and culture—all of these, of course, playing on each other. The Renaissance moved art, literature, and music into fertile new areas (think Michelangelo, who died about sixty years before Pascal was born… in Clermont-Ferrand, seen in the panoramic above); the population grew steadily, replacing the lost generations from the past years of the Black Plague and the scourge of the Hundred Years War (France lost approximately 20 percent of its population during the 14th century); and new theological ideas began to flow into France from their German neighbors (Reformation!).

John Calvin, French reformer, had dedicated his first edition of The Institutes of the Christian Religion, published in 1536, to Francis I, King of France, but Francis didn’t seem too appreciative. Martin Luther’s revolutionary ideas had found some early favor in the French courts, but his excommunication in 1521 and the subsequent development of even more radical reformers turned Francis against the movement.

These radicals were advocating the most intolerable things… like two sacraments instead of seven and the end of veneration for images. These aspects of Christian/Catholic practice were interwoven into the culture, and thus into the power structures of France. Like picking a loose piece of yarn from an old sweater, pulling these threads out of the larger fabric of Catholic French culture threatened to undo the entire composition; from top to bottom, it made possible new visions of the social order.

Francis found the nobility’s growing acceptance of this new expression of Christianity distressing and divisive. His early tolerance gave way to burnings at the stake; his son’s (Henry II) more systematic persecution continued the royal rejection of Protestantism; and when Henry II died suddenly from a jousting accident, his widow, Catherine of Medici, took over the eradication of the pesky reformers. 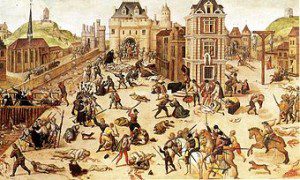 Of course, it wasn’t just theological reform or even cultural shifts that infuriated Catherine, but the threat that these Protestants posed to the throne. Many of her rivals in the French nobility were Protestant, and thus the theological message was all wrapped up in politics. (Hard to believe, isn’t it.)

Persecution of the “heretics” led to political resistance and underground rebellion, which led to more draconian measures of repression, including the massacre of whole Protestant communities. Thus began the Wars of Religion, a series of unorganized, spontaneous rounds of slaughtering and revenge and organized military battles between French Catholic and Protestant forces that went on for more than thirty years. (A scene from the St. Bartholomew’s Day Massacre for your, um, edification.)

The violence waned after the Edict of Nantes, a 1598 royal proclamation that granted civil rights to Protestants, restored their property, and granted them legal existence, albeit with certain limitations that essentially made them second class citizens. King Henry IV (see his realpolitik smile below), who made this act of toleration, had a remnant sympathy for the Protestants—he had been one before becoming king, which required his conversion to Catholicism, a conversion that was made possible, as the story is told, by Henry’s reflection that “Paris was worth a mass.” (Political pragmatism at its lowest.) 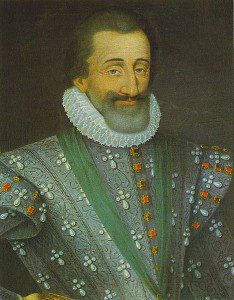 Yes, I know you weren’t really signing up for a course in French history, but the back story is important, because this Edict of Nantes was in force during Pascal’s day, and is thus the context within which Pascal wrestled with faith and politics. French Protestantism (and particularly its Calvinist form) was shadowed by the memory of danger, of public threat, of social conflict and violence. Protestants were, in some measure, subversives.

What kind of thinker, then, is Pascal, who was accused of being a “crypto-Calvinist”? What might Pascal have had in common with the Calvinist mindset? Pascal died in good standing with the Roman Catholic Church, but I doubt he gets in the canonization line any time soon. Because why?

Okay, enough French history for now. This Pascal we’re looking at is, in large measure, the product of these stories, a man sitting in the watershed moments of transition, a man trying to interpret the voices around him in ways that are consistent with his faith, his reason, and his experience. Political discord, religious shifts, ideological striving, intellectual innovation, scientific claims to supremacy—and in the midst of it all, a man whose significance is ultimately defined less by his crazy-smart contributions to the issues of his day and more by the little piece of paper in his pocket.

Our efforts to achieve our own significance are so often misplaced. May we be given what Pascal was given, may we treasure it as deeply as Pascal did, and may it define our moment in history.

January 24, 2013 I Can Speak Whale: Interrupted by Moby-Dick
Recent Comments
169 Comments | Leave a Comment
"Are u 100% sure Chp 42 already in that website??WR.MAANSHAN.INFO/P9721q"
Threetails The Ruins of Formation
"Now THAT'S chapter 69 for ya ;)NL.2633R.US\A9721nv"
gene303 A Pre-Advent Invitation: Sitting in the ..."
"and claude is also still sleeping :(lr.DAOFI.CASH/Y9721uW"
Gvwyu Jesuitae: Lessons from Ludolph
""
HungryWaffl3 Jesuitae: Lessons from Ludolph
Browse Our Archives
Related posts from Dry Bones