The Problem of Evil: Obstacles to Faith with Mark Mittelberg Part 6

When someone has something bad happen in their life, it is not due to their moral evil. Jesus very explicitly taught against that:

About this time Jesus was informed that Pilate had murdered some people from Galilee as they were offering sacrifices at the Temple. 2 “Do you think those Galileans were worse sinners than all the other people from Galilee?” Jesus asked. “Is that why they suffered? 3 Not at all! And you will perish, too, unless you repent of your sins and turn to God. 4 And what about the eighteen people who died when the tower in Siloam fell on them? Were they the worst sinners in Jerusalem? 5 No, and I tell you again that unless you repent, you will perish, too.”

So, Jesus really warned against assuming a one-to-one correlation that when someone suffers it’s because they sinned. No. We live in a generally fallen world. We are all sinners who all deserve punishment. But, we also live in a world where things are not the way that they were originally intended to be. So, there is suffering and natural disasters, and that is just part of living in a fallen world.

Another thing to keep in mind, what I call the “Fifth Point of Light” is this: God will finally judge evil.

Some people say, “Because God hasn’t dealt with evil yet, then He cannot be good.” They say this, assuming that He will never deal with evil, but the Bible says otherwise. Or, as Norman Geisler puts it, it’s like reading the first nine chapters of a ten-chapter novel, and then criticizing the novelist for not completing the plot.

You need to see the work to its completion before you can criticize the logic of the author.

Similarly, before anyone can criticize God for not judging evil in the world, they need to read the last chapter of the Book and know that there will be a day when He promises that judgment will occur.

What we should be saying is, “God will one day judge evil and THANK GOD HE HASN’T DONE IT YET!”

When you consider what mankind has done to one another, from the killing of over 100 million people in the 20th century to the senseless crimes of human trafficking; when you think about the stealing and lying running rapid through our government, etc. It’s hard to understand how in the world God puts up with us.

He must be patient.

The Lord isn’t really being slow about his promise, as some people think. No, he is being patient for your sake. He does not want anyone to be destroyed, but wants everyone to repent. (2 Peter 3:9)

Why hasn’t God brought about judgment yet? Because He loves us. We just need to wake up, repent, and turn to Him.

My Sixth Point of Light is this: God suffered, too.

We get too caught up in our own suffering, but what we need to understand is that the God who allows us to suffer for a season came to this world as one of us, in Jesus, and suffered in a way that none of us ever will.

Though He was God,
He did not think of equality with God
as something to cling to.
7 Instead, He gave up His divine privileges;
He took the humble position of a slave
and was born as a human being.
When He appeared in human form,
8     He humbled himself in obedience to God
and died a criminal’s death on a cross.

It is impossible for us to comprehend the divine demotion that Jesus willingly went through for our sake so that He could purchase our salvation on the cross.

For more encouraging and engaging videos and podcasts, visit the E-Squared Media Network at www.e2medianetwork.com.

April 9, 2015 Blending Your StepFamily 54: Truest Truth (About You)
Recent Comments
0 | Leave a Comment
"Stine may be God's clown, but in no way, shape or form can he be ..."
Noel C Brad Stine Has Issues: I Don’t ..."
"sounds like this was written by an extremely angry individual"
Christiane Smith Brad Stine Has Issues: I Don’t ..."
"Well done!"
Roger McKinney Summit Lecture Series: Intro To The ..."
"Thanks for this information Joel. I'm sad to see Kevin lose his bearings. It's not ..."
Bryan Chalker Kevin Max of DC Talk, Seeking ..."
Browse Our Archives
get the latest from
Christian Podcast Central
Sign up for our newsletter
POPULAR AT PATHEOS Evangelical
1 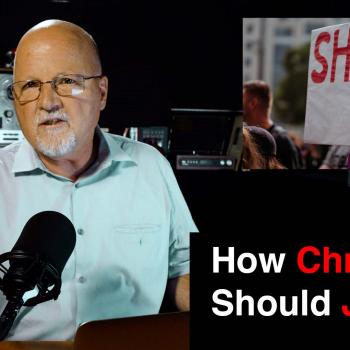