Write a Different Ending: Phineas and the ‘Butter Battle’

I preached at a church recently where they were doing a sermon series on Dr. Seuss books.  I chose to preach on The Butter Battle, and contrasted it with the little-known story of Phineas and the tribes of Israel in Joshua Chapter 22. 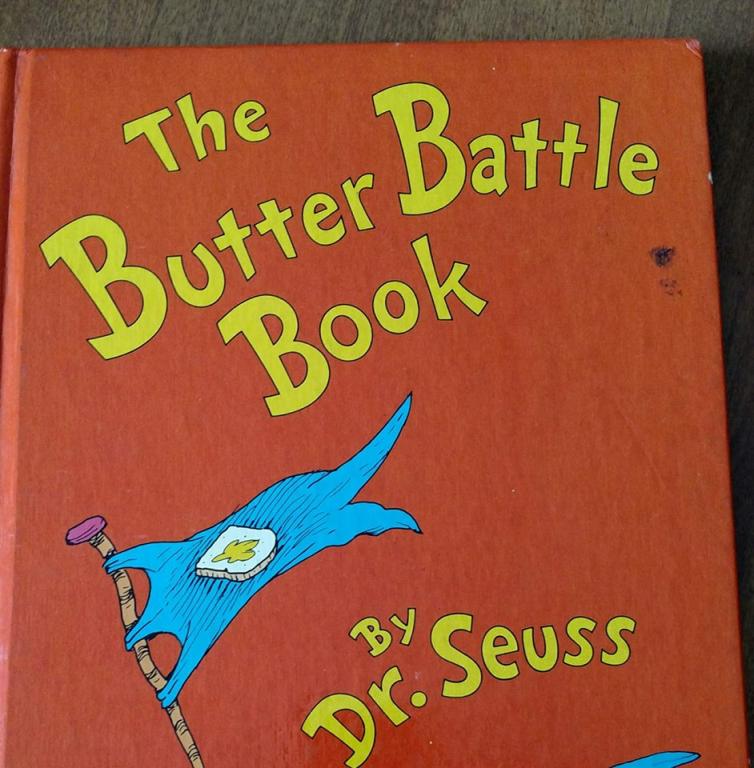 I began with a children’s sermon reading parts of the book. 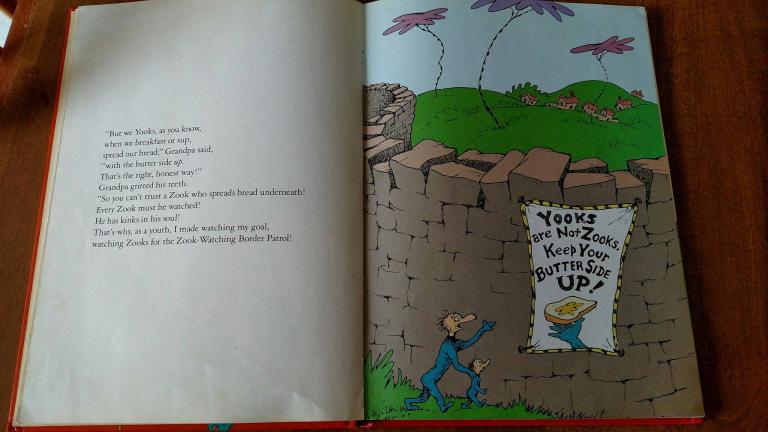 First they build a wall, then patrol the wall with weapons, then with bigger weapons and bigger armies, until each side is poised on the wall ready to drop an atomic bomb. 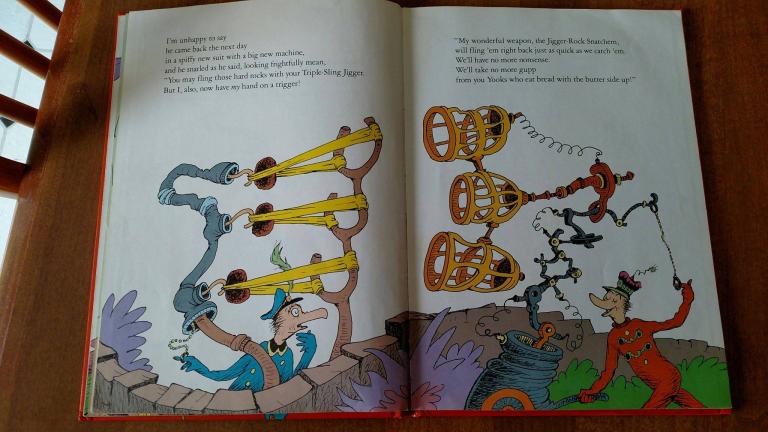 I pointed to the blank page at the end of the story.  I asked, “How do you think this story will end?” One boy said they would blow each other up.

“Yes, that’s one way it could end,” I said.  “But if we could write the ending of this story, what would we like to see happen?” 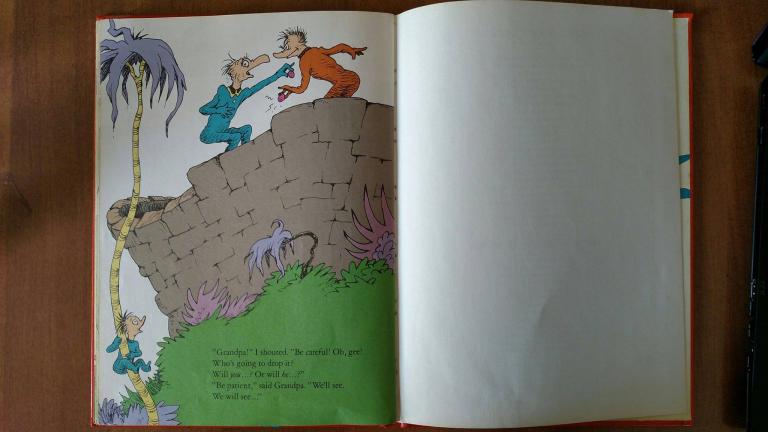 We talked about wanting to see the little boy go up to the men and tell them to bury the bombs in the ground, tear down the wall, and eat butter bread together.

I invited them to think about that ending as they listened to the story of another kind of “butter battle” in the book of Joshua.

Watch the video of the sermon here:  https://www.youtube.com/watch?v=K5nPev5QlXw

Sometimes I feel like I’m living in the middle of The Butter Battle book.

I see the headlines and watch the news. I hear about potential wars, armies in a stand-off against each other.  And I get very nervous.  It makes me feel scared.  I’m scared for myself and my children.  For children in other countries.

And I wonder – where is God in the midst of our “butter battles”?

The text from Joshua 22 has some interesting parallels to this Dr. Seuss story about the butter battle.  The Israelites had just come off a conflict where they had been worshiping idols at a place called Peor.  God was very angry with them and punished them for this idolatry. So they were very sensitive about anything that might resemble idol-worship.

The Reubenites, the Gadites, and the half-tribe of Manasseh

After the Israelites had invaded and conquered Canaan, each of the twelve tribes was given a parcel of land.  The Reubenites, the Gadites, and the half-tribe of Manasseh received land across the River Jordan.  It wasn’t a wall, like between the Zooks and the Snooks, but it was a natural barrier that separated them from the other ten tribes of Israel.

The Reubenites, the Gadites, and the half-tribe of Manasseh were worried that in future generations, the other tribes of Israel would say to their descendants, “You are not part of us.  You don’t belong to the nation of Israel.  You’re across the river.  You’re on the wrong side of the tracks.”

So they built an altar to stand as a witness that they are all part of the same nation of Israel.  But that’s not how the rest of the tribes saw it at first.  The other Israelites saw them building this altar, and they assumed that these tribes were about to engage in idol-worship.  This is what got them in so much trouble to begin with.  They were afraid that God would punish all of them, just like God did at Peor.

What happens next mirrors the butter battle.

They gather their soldiers, build up their armies, put on their uniforms, stock-pile their weapons, and ready themselves for war.  In their minds, it’s better for them to destroy the Reubenites, the Gadites, and the half-tribe of Manasseh, than it is for God to punish them all.

But here’s where the story takes a turn and shows us what can happen on the blank at the end of the story.

The Bible gives us a picture of what can happen when God’s will is accepted in the midst of preparations for war.

Instead of just launching into attack, Phineas the priest takes with him a delegation of leaders from the ten tribes to go talk to the wayward tribes.  Instead of attacking right off the bat, they pause, take a deep breath and ask some questions.  “Why are you doing this?  Why are you bringing this upon us?” They’re asking the tribes to explain why this altar is there.  They’re giving their cousins a chance to explain.

That is what doesn’t happen in the butter battle.  In the Dr. Seuss book, there’s no conversation. They just build higher walls and bigger weapons.

But Phineas and the leaders ask the questions, and then wait for an answer. They give their kinsmen a chance to explain what’s going on instead of starting a war. This allows the Reubenites, the Gadites, and the half-tribe of Manasseh a chance to offer a reasoned response.

“We didn’t want your future generations to exclude our children from being able to worship God.  This altar isn’t about worshiping other Gods.  It’s meant to stand as a witness that we are all in the same worshiping community.”

Then Phineas and the other leaders basically say, “Oh!  Now we get it!  Now we understand!  You weren’t actually doing anything bad. You were doing something good!  And we can see that the Lord is present here.”

A sigh of relief

Not only do they say this to the Reubenites, the Gadites, and the half-tribe of Manasseh, they go back to their own tribes and say, “It’s okay.  Lay down your weapons.  Everybody just take a deep breath.  We’re going to explain what this altar is really about.”

And you can feel the whole community go, “Phew!” Because nobody really wanted a war.  In war, women and children die.  Animals die.  Men die in battle.  The earth is scorched.  Nobody truly wants a war.

Phineas and the other tribes were understandably afraid when they saw that altar.  But instead of responding to fear with violence, they stopped, took a deep breath, asked some questions, and waited for an answer.  They engaged in conversation and arrived at understanding.

Our churches are to engage in this kind of godly behavior.

And we, as Christians, are to engage in this kind of behavior.  If you’re like me and you’re nervous and fearful about all this talk of war, worried about conflicts with people who are different than us, this story from Joshua can be very helpful.

This is not to minimize the very real threats around us.  And, admittedly, the story in Joshua assumed rational minds not jacked up on super-charged egos.  We don’t have such leaders in place today.  And, obviously, none of us are heads of state to be able to have these high-level talks. We don’t serve as international emissaries.

But we can serve as emissaries of peace within our own spheres of influence. 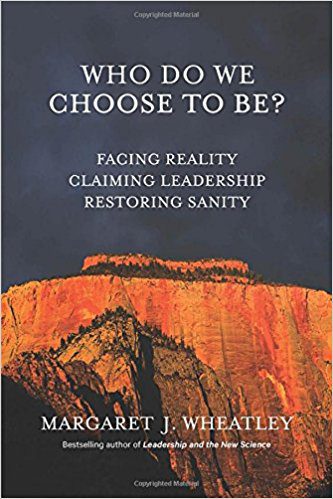 There’s a book I’m reading right now by Margaret Wheatley called Who Do We Choose to Be? Facing Reality, Embracing Leadership, Creating Sanity. In this book she acknowledges that in many ways the world is falling apart.  But part of our job as leaders is to create “islands of sanity” in the midst of chaos.

That means that whatever sphere of influence is, you have been tasked by God to create islands of sanity.

So in your own home, if there is a conflict with someone in your family, instead of escalating – stop, take a deep breath, engage in conversation to arrive at understanding.

In your workplace, if people are getting on your nerves or things are getting heated – take a step back, ask some questions, and try to reach some understanding.

For students in school, you know how it can be with the drama.  There are conflicts and rumors and things can escalate very quickly between kids.  It can become a kind of social war.  As Christians, you are called to calm down, take a breath, ask some questions, and be a zone of peace in the midst of the insanity.

Our churches can do the same.  God is calling us to create islands of sanity in the midst of this insane world.

So in our Bible studies and at coffee hour and in the parking lot when we hear strong words and escalation, we can stop and say, “Wait a minute.  Remember Phineas?  He calmed things down, took a step back and engaged in conversation.”

They’re going to say,  “The Lord is present here. Thanks be to God.” 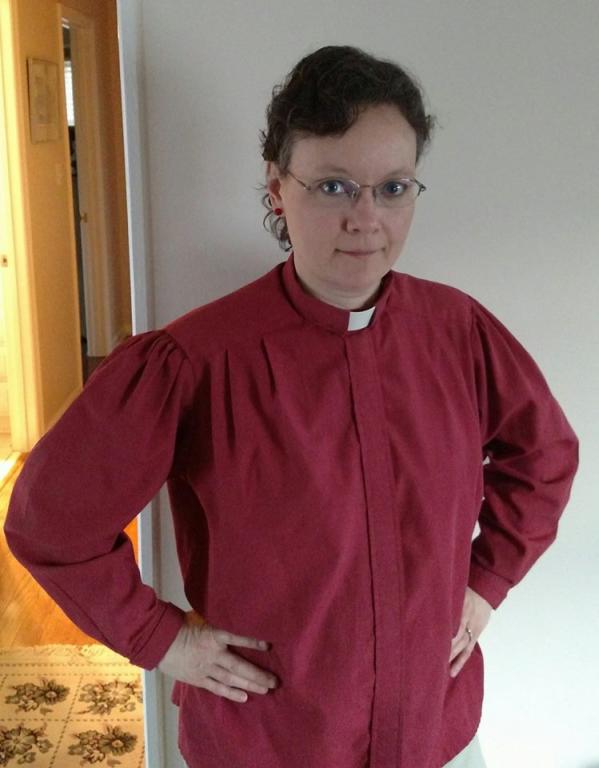 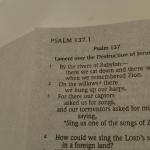 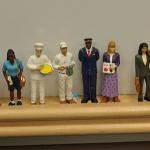