A Reading from Genesis of the Gun Bible, Chapters 2 and 3.

And on the eighth day, God created guns.  The GunGod formed metal from the dust of the ground, and breathed into its barrel the fire of death; and the gun became a living being. And the GunGod planted the gun in the hand of Adam; and there he put the gun which he had formed.  And on that day Adam became Gun-man and dwelled in the Garden of Gehenna*. Out of the ground the GunGod made to grow every gun shop and gun show and ammunition manufacturer that is pleasant to the sight and good for gun-food, the tree of death also in the midst of the garden, and the tree of the knowledge of good and evil.

A river of blood

A river of blood flows out of the gun to water the Garden of Gehenna, and there it divides and becomes four branches.  The name of the first is the “2nd Amendment”, from there the river of blood flows around the whole land.  The name of the second river is “Profit”, and it flows through the land where there is gold; and the gold of that land is good. And gold is given to the gun and the gun is used to get the gold. The name of the third river is “Fear”, and the people drink from this river and are filled with fear.  And the fourth river has no name and is hidden from the people and flows to the west to the Garden of Eden.  In that garden there are no guns and the Tree of Life is planted and grows.

The Tree of the Knowledge of Good and Evil

The GunGod took the Gun-man and put him in the Garden of Gehenna to kill in it and keep all manner of people afraid. And the GunGod commanded the Gun-man, ‘You may freely kill every person in the garden; but of the tree of the knowledge of good and evil you shall not eat, for in the day that you eat of it you shall die.’

Then the GunGod said, ‘It is not good that the Gun-man should be alone; I will make him a helper as his partner.’

So out of the ground the GunGod formed every gun lobbyist and every politician who worships at the altar of the gun, and brought them to the Gun-man. The Gun-man gave names to all guns, and to the ammunition, and to every bump stock and silencer and every manner of equipment for the gun; but for the Gun-man there was not found a helper as his partner. So the GunGod caused a deep sleep to fall upon the Gun-man, and he slept; then he took his heart and closed up its place with flesh. And the heart that the GunGod had taken from the Gun-man he made into another gun-man and brought him to the Gun-man.

They become one flesh

‘This at last is bone of my bones
and flesh of my flesh;
this one shall be called Patriot,
for out of Gun-man this one was taken.’

Therefore a gun-man leaves his father and his mother and clings to his fellow gunmen, and they become one flesh. And the Gun-man and his fellow gun-men all were naked and vulnerable, but were not ashamed, because of the guns in their hands and their houses and their cars and their hotel rooms and their churches.

The temptation of peace

Now the Peaceful Ones said to the Gun-man, ‘Did your GunGod say, “You shall not eat of the fruit of the tree of knowledge of good and evil, nor shall you touch it, or you shall die”? You will not die; for the GunGod knows that when you eat of it your eyes will be opened, and you will know good and evil.’ So when the Gun-man saw that the tree was good for food, and that it was a delight to the eyes, and that the tree was to be desired to make one wise, he took of its fruit and ate; and he also gave some to his fellow gun-men, and they ate. Then their eyes were opened, and they knew that they were naked and vulnerable, and that no guns could keep them safe.

Sinners in the hands of an angry GunGod

But they heard the sound of the GunGod walking in Gehenna at the time when the smell of gunpowder would float on the evening breeze, and the gun-men hid themselves from the presence of the GunGod.  But the GunGod called to the Gun-man and said to him, “Where are you?” The Gun-man said, “I heard the sound of you in Gehenna, and I was afraid, because I was naked; and I hid myself.” The GunGod said, “Who told you that you were naked? Have you eaten from the tree of which I commanded you not to eat? Do you now know good and evil?”

The Gun-man said, “The Peaceful Ones gave me the fruit from the tree, and I ate.”  The GunGod said to the Peaceful Ones, “Because you have done this, cursed are you, and you will be shot.  I will put enmity between you and the gun-men, and between your offspring and theirs.  You will preach peace, and they will shoot you.  I will greatly increase your pain in living as you watch your children die from the gun.  Yet your desire will be for more guns, and they shall rule over you.”

Then the GunGod said, ‘See, the Gun-man knows good and evil; and now, he may seek out the river to Eden and reach out his hand and take also from the Tree of Life, and eat, and live in peace.” Therefore, the GunGod placed the cherubim at the Garden of Gehenna to block the way to Eden, with all manner of guns firing and turning to guard the way to Eden and the Tree of Life.

The Tree of Life still stands

To the west is the Garden of Eden where there are no guns, and no massacres, and no children die from bullets. And in that Garden stands the Tree of Life to this day.

*Gehenna is a small valley in Jerusalem, where some of the kings of Judah sacrificed their children by fire. Thereafter it was deemed to be cursed.

This piece was inspired by Jeff Hood’s piece, “Apostasy: Guns, God, and Sutherland.”

Does this “scripture” sound wrong? It is. Because we are worshiping the wrong god. And until we stop, more people will die in churches, schools, concerts, movie theatres, night clubs. Because the GunGod wants only one thing: self-perpetuation at any cost. And the cost is your life and the lives of those you love.  It is past time to renounce our idolatry of the GunGod and worship the God of Peace.

To read more of Leah’s reflections on gun violence: 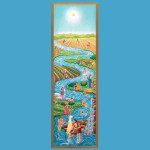 November 3, 2017
The Reformation is Over: Long Live the Eco-Reformation!
Next Post 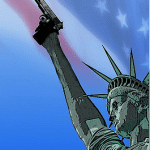 November 7, 2017 Worshiping the Gun God is Killing Us
Recent Comments
0 | Leave a Comment
Browse Our Archives
get the latest from
EcoPreacher
Sign up for our newsletter
POPULAR AT PATHEOS Progressive Christian
1

Revisiting Highway 61: All you know...
slacktivist
Books by This Author Books by Leah D. Schade