A Reflection on Holy Communion.

One of my favorite poets, David Whyte, describes tasting as an act of incarnation. When we fully participate in our own lives, bringing our whole selves to each moment, we incarnate – become flesh – in a way that is wholly unique.  No one else has ever embodied this frontier of existence in quite the same way.  And no one will ever experience this confluence of tasting, smelling, seeing, touching, and smelling in this way again (Midlife and the Great Unknown by David Whyte).

A new perspective on Holy Communion

As I listened to Whyte describe this poignant phenomenon of human existence, it gave me a new perspective on the ritual of Holy Communion.  Every time you come to the table, to the cup and the bread, you are bringing the whole of yourself.  The holy incarnates in you as you taste. And you incarnate the holy as well. No one has ever embodied this moment of existence in quite the same way.  And as you accumulate these moments of ritual in your body over time, they not only shape who you are, but you add to the meaning of the meal by your very presence.

We may think it is a mundane and repetitive thing to do the same rituals every time. Every week, always the same.

But each time you come, you are a bit different.  Sometimes you are a lot different.  And this matters not just for your own life, but for the life of your church, for the meal itself, and for the whole of God’s Creation.

I remember as a child sometimes getting bored with the same routine week in and week out.  But then there was the time when I took communion after my grandmother had died.  And I realized I had changed.  My world had shifted, and not for the better.  At that meal I held the wafer and the bittersweet wine touched my tongue.  This was the same tasting I had done every week with a teenager’s attitude of “here we go again.” But this time I knew something was different.  At that moment the communion meal became a gift of solace that I never knew was possible, or that I would ever need.  That same old boring meal was now a comfort of familiarity in a world that had suddenly become unfamiliar now that my grandmother was gone.

The meal had incarnated in me in a new way.

On another occasion a year or so later, I took communion kneeling beside the young man I had fallen in love with and would one day marry.  My world had shifted again.  I had changed, this time in a glorious, heart-expanding way.  As I kneeled at the rail and held out my hand for the bread and cup, my shoulder touched my beloved’s. The communion meal was a marker and a witness to our blossoming relationship. The meal had incarnated in me – and in him – in a new way.

Each time the bread and cup are offered, I spiral back around to the ritual with my whole self.

Sometimes it seems like nothing changes.  I barely perceive the shifts that are incremental.  Other times I feel like a completely different person. My very cells are changed by . . . pregnancy . . . birthing  . . . nursing.  My incarnation at the meal means that I bring all of my grief, all of my joy, my physical pains, my long-term relationships, my short-term anxieties.

And when I bring my whole self, I also bring all that has accumulated in me from the environment in which I live.

If I lived in Flint, Michigan, I would bring my body laced with lead from tainted drinking water.  If I lived in “Cancer Alley” along the Mississippi River where heavy industry pollutes the air and land, I would bring my body that had absorbed all the toxins around me.  And when I lived in Central Pennsylvania, I brought my body that had absorbed traces of fracking fluids that flowed down the mountain streams into the Susquehanna River – the source of my drinking water.  You and I are each an incarnation of Earth – and the fullness therein – at every instance when we partake of the ritual of communion.

At the same time, I take into myself all that the communion elements have brought to me from the environment in which they grew and were harvested.  In ways I never did as a child, I worry about the wheat and the grapes that I am ingesting.  What was the quality of the water they absorbed?  What chemicals were used on them in the growing process?  When I come to the table, I think about the vineyards that were lost to flames and charred earth in the Sonoma Valley from the wildfires.  I worry how climate change will affect the growth of the grains and grapes. However these changes occur, Earth will continue to incarnate in me. Creation comes to me through the communion meal with all its pain and pollution, with the consequences of a thousand choices made before I even bring the bread and wine to my lips.

Liturgical theologian Benjamin Stewart describes a field trip he took to visit first a vineyard and then a high-desert wheat farm. He writes in his book A Watered Garden: Christian Worship and Earth’s Ecology (Augsburg Fortress, 2011) about the many facts he learned about the food. Who grows it. Were it is produced.  How it travels to where it will be consumed.  But something more profound occurred to him on that trip:

Something more like wonder arced out between the fields, the vineyards, my mind, and the liturgical celebrations of my community.  I could now imagine the very particular land on which our bread had been ‘scattered over the hills and was gathered together and became one,’ in the words in which the Didache encourages us to pray.  In the vineyard, I had seen how the branches that abided in the vine bore much fruit, as John remembers Jesus teaching (John 15:1-11).  Images of care, labor, and worth associated with vineyards in scripture were now filled out by the bodily experience of the hard and hurried work we did to bring in the precious, fragile grapes.

In what was certainly a brief encounter with field and vineyard, my own eucharistic participation and prayer were enriched by encountering biblical and liturgical images and experiences that were, in fact, unavailable to me within the boundaries of the Sunday liturgy itself (pp. 60 – 61).

Stewart’s description of the field and vineyard reminds me that the meal incarnates God’s Creation in me every time.

And I incarnate that meal with all that I am every time.  Even when I’m bored, distracted, or annoyed. When I’m amused by the child dancing. Or wincing as I watch the man make his way to the table with crutches. When I’m winking at my daughter who now offers me the cup as a newly confirmed member of the church. Or waving at my son who carries the fragile flame as an acolyte.  No matter the state of my mind or my body, the communion meal meets me where I am every time.

2000 years ago, a man promised that this meal would be the taste of accompaniment, the aroma of abiding presence.

His followers believed it so much that they preserved this ritual and practiced it at every weekly gathering.  They did more than enshrine a formula of sacred words and actions.  The eating and drinking are at once a holy remembrance and an act of trust in the future of that divine presence.  Taken together, we call it faith.

May your incarnation hold – and be held by – this sacred meal. 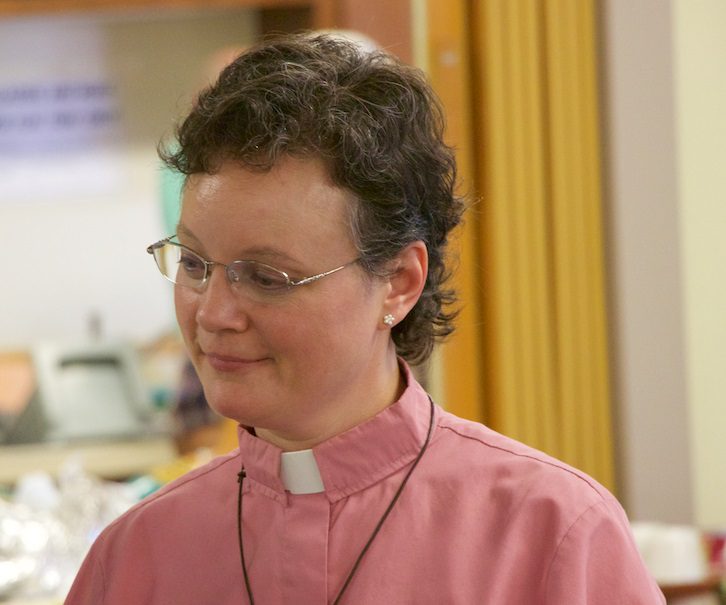 Leah D. Schade is the Assistant Professor of Preaching and Worship at Lexington Theological Seminary (Kentucky) and author of the book Creation-Crisis Preaching: Ecology, Theology, and the Pulpit (Chalice Press, 2015).  She is ordained clergy in the Evangelical Lutheran Church in America. 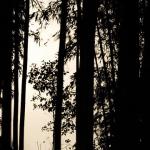 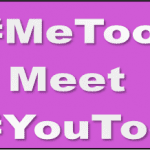