This is Day Two of my devotional for the 7-Day Vegan Challenge.  You can read about why I’ve undertaken this week-long break from all animal products here.  Each day I’m posting a short devotional because my decision to go vegan is informed by my faith, my interpretation of the Bible, and my ecotheological ethics.  On this second day of the challenge, I make the connection between forest loss, the animal industry, and the woods of my youth.

They shall cut down her forest, says the Lord, though it is impenetrable, because they are more numerous than locusts; they are without number. Jeremiah 46:23

1 animal was not killed.

54 pounds of carbon dioxide were not sent into the atmosphere.

1 square mile of forest was spared.

All of this from just one day of eating a vegan diet.

That’s according to the Vegan Calculator which you can find here.  It calculates for a month, so I had to subdivide.  But I was stunned at how much forest I saved by not consuming any animal products.

Seventy billion farmed animals are reared annually worldwide. More than 6 million animals are killed for food every hour. Not only are the livestock in this quantity contributing to climate change, but the reallocation of land necessary to make room for the growing demand has its own repercussions.

Every second, 1-2 acres of rainforest are cleared for grazing livestock or growing animal feed. Up to 137 plant, animal and insect species are lost every day because of the destruction of these biodiverse regions of our planet. Specifically within the Amazon rainforest— the home for at least 10 percent of the world’s known biodiversity— 91 percent of deforestation is caused by livestock.

As a girl, I remember watching in horror as bulldozers decimated the patch of woods near my house where my friends and I had spent days on end playing, climbing, and building forts.  As an adult, I need to make the connection between my eating habits and deforestation.  I know my efforts to eat vegan for a week are but a miniscule drop in the proverbial bucket.  But that doesn’t make my awareness any less significant.

It was a long day, so I didn’t have time to do a homecooked meal.  So I heated up some of Trader Joe’s vegan pea soup which was quite tasty.  I also tried some of their vegan mozzarella shreds melted on Triscuits.  Spritzed with a little olive oil and sprinkled with some fresh basil, oregano, and thyme, they gave me the combo of crunch and gooeyness I was craving.

What did I miss?  Mint chocolate chip ice cream.  Yep, it’s one of my favorites – the treat I give myself at the end of a long day.  So instead, I’ll settle in with a cup of hot mint tea with a little sugar and a splash of almond milk and remember that no forest was required for the making of this meal.

God of the forests, how can we be forgiven when we know exactly what we do?  How can we live if the forests die?  Change my mind, my heart, and my taste buds to be kinder to the trees.   Amen. 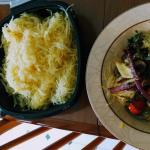 October 16, 2018 Breakfast of Vegan Champions: Vegan Devotional, Day 3
Recent Comments
0 | Leave a Comment
Browse Our Archives
get the latest from
EcoPreacher
Sign up for our newsletter
POPULAR AT PATHEOS Progressive Christian
1

The POSITIVES of Purity Culture
All Set Free
Books by This Author Books by Leah D. Schade 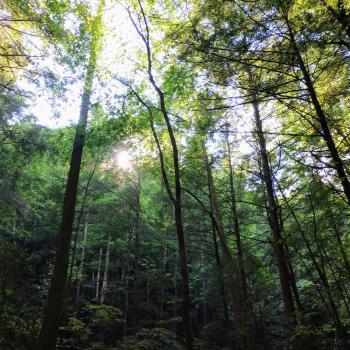