Joseph has a minor role in the Christmas story. But the relationship between Joseph and Jesus gives us a new perspective on the non-traditional parent.

In Part One: “Round Yon Joseph, Father and Child,” I noted that the relationship between Joseph and Jesus deserves more than a cursory glance in the Christmas story. It’s worth taking a moment to sit next to Joseph as he gazes on his wife and her newborn son and realize what an important role he plays in this story.  Because it gives us a chance to think about parenting in non-traditional ways.

If we look at the story of Joseph in the Gospel of Matthew and compare it to his namesake Joseph in the book of Genesis, we see there are some uncanny parallels. First, like his namesake, Joseph is the recipient of profound dreams. Angels appear to Joseph in a series of dreams, first telling him to take Mary as his wife. Then, after Jesus is born, to flee to Egypt to escape Herod’s slaughter. A third and final dream tells him to return to Nazareth once it is safe. And just like Joseph of the Hebrew Scripture, Joseph in our story goes to Egypt in order to save his people. Joseph has an important role in both of these stories.

But beyond the Christmas story, we don’t hear much about Joseph’s life or his relationship with Jesus.

The last time we hear about him is when he, Mary, and 12-year-old Jesus are in Jerusalem after everyone else has set out to return home, Jesus lingers behind in the temple, instructing the scribes about the ways of God. His parents are worried sick about him when they realize he’s missing from their group. The last image I have is of the worried and angry Joseph grabbing Jesus by the collar, probably saying something like, “I don’t care if you were in your Father’s house. I’m your father now, and you’ll do as I say!”

After that, Joseph just disappears.

We don’t see him at Jesus’ baptism. He’s not mentioned at the Sermon on the Mount. And while we see his mother at the foot of the cross, Joseph is nowhere to be found.

Scholars speculate that Joseph might have died by the time Jesus began his ministry. Or there might have been such a rift between Joseph and Jesus that the two did not have a relationship as Jesus became an adult. More likely, the Gospel writers were so intent to show God in heaven to be his “Abba” or “Daddy” that that relationship overshadowed whatever connection there was between Jesus and his earthly father.

But just because the Gospel writers did not see fit to keep Joseph visible in the rest of Jesus’s story does not necessarily mean that he was not there.

Certainly Joseph would have taught Jesus the Torah, because Mary, like most women at the time, may not have been taught to read. And Joseph certainly would have brought Jesus to the synagogue, watching the faith of his son take root and grow.

Joseph did all those things.

Just in those few, brief passages in Matthew in which we encounter him, we find that Joseph demonstrated gentleness, compassion, and caring towards Mary. He stood by her, no matter what their families and neighbors might have whispered about them behind their backs. And he made sure that Mary and Jesus were safe as they made their journey to Egypt. Joseph certainly risked his own life by seeking to protect this baby boy whom Herod sought to murder.

In all these things, Joseph trusted God, no matter how dire the circumstances may have appeared.

So, who’s to say that just because the Gospel writers barely mention Joseph that he wasn’t there?  Who’s to say there wasn’t a day when, as a young man, Jesus was working alongside his father in the carpentry shop telling him of the undeniable call he felt to seek out John the Baptist in the wilderness and find his destiny beyond Nazareth? Perhaps Joseph encouraged him to follow this call, much as he followed the call to become a husband and parent.

Jesus was not just Mary’s child.  He was Joseph’s child, too.

As Joseph watched Jesus walk off in the distance to find John the Baptist, he might have said proudly, “My child, too!”

When news of his son’s miracles and the crowds that followed him throughout Galilee reached Joseph, he might have nodded with a smile, “My child, too.”

And maybe, standing at a distance at Calvary, he gazed once again upon his wife and son. Mary still hovering lovingly, but this time with anguish as her child hangs on a cross. Joseph, once again, standing awkwardly off to the side, this time his voice broken with pain. “My child, too.”

Joseph helps us rethink the role of the non-traditional parent.  He shows us that there is more to being a parent than just biological heredity.

I think of so many people who care for children not of their bloodline, but who they still consider their own.  And I think of those folks I’ve known who parent amidst added layers of complications.

The parents who adopt a child who is a different race or ethnicity than their own.

The gay couple who adopts a child with special needs.

Grandparents who step in when a parent is absent or negligent.

The partner in a lesbian couple whose spouse bears their child but she has had to fight for parenting rights.

The single woman who adopts a child from an orphanage in a far-away country.

I’ve encountered all of these people in my life.  Like Joseph, it may be easy to overlook them, erase them, or discount these non-traditional parents.  But they nurture and guide these children.  They are present for the crawling and walking and jumping. The messes. The growing and learning. The testing and rebelling.  As I imagine Joseph was for Jesus, they are a steadfast presence for these young ones as they find their way in the world.  “My child, too,” they say.

Joseph also experienced the pain of knowing that his child would suffer, and that all the love in his heart could not save Jesus from his destiny.

Certainly Joseph heard the words Simeon told Mary when they brought the baby for his presentation in the temple. “This child is destined for the falling and the rising of many in Israel, and to be a sign that will be opposed so that the inner thoughts of many will be revealed – and a sword will pierce your own soul too” (Luke 2:34-35).

Joseph’s soul was also pierced with these words.  “My child, too.”

But I wonder if, many years later, after his son had been crucified, Joseph might have heard about the resurrection.

Perhaps went out searching, following the rumors, until he found himself standing at a distance on the mountain in Galilee, glimpsing Jesus ascending to his Father in heaven. “My child, too.”

All the dreams come rushing back to him, the words of the angel suddenly taking on a new meaning altogether. His faith rekindled from the embers of a memory. The faith that urged him to parent this child, protect this child, teach this child, release this child, believe in this child.

This is the faith that finds its way through the pain, the disconnect, the complications, the anguish.

This is the faith that joins both Joseph and Jesus with the God who created and redeemed them.

This is your faith, too. And it is the faith of those who become Josephs for the children in their lives,  challenging our notions of traditional fatherhood, parenthood, family-hood. 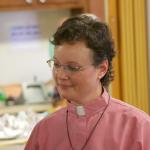 Round Yon Joseph, Father and Child

Christmas Birthday: Letter to My Son, Born on Christmas Day 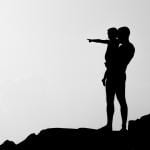 December 19, 2019
Round Yon Joseph, Father and Child
Next Post