Trumpism is a Starfish, not a Spider. How should churches respond? December 6, 2020 Leah D. Schade

Trumpism is not going away.  It’s a “starfish,” not a “spider.” And it’s a threat to the church. How should congregations respond?

Many are breathing a sigh of relief believing that the nightmare is coming to an end.  Yes, Biden won the election by a comfortable margin.  But we can’t be naïve.  While the figurehead may be ousted, Trumpism itself is stronger than ever.  More people voted for Trump in 2020 than in 2016.  In fact, over 74 million people voted for him this time.  That’s 10 million more than voted for him in the previous election.

As they have demonstrated in the post-election season, Trump’s supporters will likely never accept the results of the election.  Trump and his minions have repeated lies upon lies to stoke their true believers and generate civic unrest.

Why should we care?  Aren’t they just a bunch of fools being fleeced by a desperate deposed despot?

Actually, we need to take this seriously.  Because when nearly half the country does not believe facts and science, it destabilizes democracy and leads to violence.

This kind of divisiveness and destabilization can manifest in churches as well.

In congregations where certain members disbelieve verifiable truth, devote themselves to a cult of personality, and cling to white nationalist ideology, finding unity for ministry is challenging at best.  Sometimes it’s impossible.  Especially when struggling congregations are already teetering due to the unrelenting Covid-19 pandemic, political divisions can exacerbate and magnify tensions.

While this situation is new to many Americans, this is not the first time in history when a country has faced this kind of destabilization.

Jochan Bittner wrote that Donald Trump’s ‘Stop the Steal’ campaign recalls one of the most disastrous political lies of the 20th century – the 1918 stab-in-the-back myth in Germany.

“One hundred years ago, amid the implosions of Imperial Germany, powerful conservatives who led the country into war refused to accept that they had lost.”  This resulted in the Dolchstosslegende, the legend that Imperial Germany did not actually lose World War I.

“Defeat, its proponents said, was declared but not warranted. It was a conspiracy, a con, a capitulation — a grave betrayal that forever stained the nation. That the claim was palpably false didn’t matter. Among a sizable number of Germans, it stirred resentment, humiliation and anger. And the one figure who knew best how to exploit their frustration was Adolf Hitler.”

Sounds similar to what Trump and his supporters is saying about the 2020 election, doesn’t it?

To be clear, Bittner is careful to say that he is not comparing Trump to Hitler.  Rather, he points to the Dolchstosslegende as a warning not to dismiss Trump’s baseless and laughable campaign.  With millions of people in this country falsely believing that the election was stolen, the seeds are now sown for “future social polarization and division on a scale America has never seen.”

Polarization and division will not end when Trump leaves.  It may get worse. Because Trumpism is a “starfish”

One way to understand this phenomenon is with the spider v. starfish metaphor described in the book by Ori Brafman and Rod A. Beckstrom, The Starfish and the Spider: The Unstoppable Power of Leaderless Organizations (Portfolio, 2008). Written for businesses to assess their workplace culture and leadership, The Starfish and the Spider contrasts centralized and decentralized organizational structures. 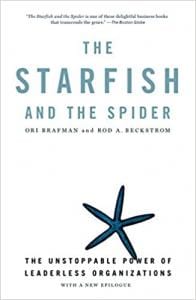 The metaphor works like this.  If you cut off a spider’s head, it dies. But if you cut off a starfish’s leg it grows a new one, and that leg can grow into an entirely new starfish.

Traditional top-down organizations are like spiders.  They may have many “legs,” but if the leader is removed, the organization dies, and the legs are useless.  They are centralized organizations that rely on the “brain” at the center to communicate to and activate its members.

In contrast, starfish organizations are decentralized, diffuse, and regenerative.  Think of networks such as Craig’s List or Wikipedia. Group members communicate with each other directly.  Even if some participants leave the group, the organization can continue.  Knowledge and power is distributed, and instead of a clear division of roles and funding, roles are amorphous and units are self-funding.  All of this enables the organization to be nimble and flexible.

But the starfish model can manifest in harmful and destructive ways, such as terrorist organizations.

The authors examine al Qaeda as one example of a decentralized, amorphous network that does not disappear when a key leader is arrested or killed.  Governments trying to fight terrorism are at a disadvantage because they don’t know how many different cells there are, where they are located, or who the leaders are.

I make the case that Trumpism is a “starfish” not a “spider.”

Just because their leader has been removed from power does not mean that the network of white Christian nationalism will wither and fade away.  In fact, it may manifest itself in even more pernicious and dangerous ways, such as domestic terrorism, which is already on the rise in this country.

The U.S. has numerous domestic terrorist organizations.  Take, for instance, the network known as QAnon, which the FBI has identified as a domestic terrorist threat.   According to Snopes.com, “QAnon refers to a group of people who have built a belief system by extrapolating meaning from cryptic messages that were posted by an anonymous person(s) on various internet forums.”  QAnon is dangerous because “fringe political conspiracy theories very likely motivate some domestic extremists to commit criminal, sometimes violent activity.”

Note how Snopes describes QAnon: “As the group QAnon has grown, its tentacles have reached into all manners of political discourse, spreading lies about everything from vaccination, to Black Lives Matter, to the fight against COVID-19.”

Tentacles is the right word.  Because QAnon is a “starfish.” And it’s a major communications network for Trumpism.

According to NBC News, there are 3 million members of QAnon Facebook groups.  And then there’s Parler, the conservative social media platform.  Parler is reported to have about 4 million active users and over 10 million total users all of whom traffic in disinformation campaigns and QAnon conspiracy theories.

As Snopes concludes, “QAnon is no longer a fringe conspiracy theory. It is a popular ideology that teaches people to reject reality and distrust institutions.”

Some of these QAnon followers are in mainline Christian congregations.  Their ideology is a threat to the church.

Christians are called to obey the Ten Commandments and the teachings of the prophets, Jesus, and the doctrines of our faith traditions.  These hold us accountable to the tenets of truth-telling, justice, and righteousness.  But Trumpism — using the tentacles of QAnon, Parler, and other social media platforms — undermines and attacks these principles.

As the co-founder of the Clergy Emergency League and a seminary professor working with ministry students throughout the country, I am hearing an increasing number of reports about church members who espouse conspiracy theories, post hate-filled memes and propaganda on their social media, and refuse to acknowledge the reality of Covid-19, much less white supremacy, climate change, or the many injustices that need the church’s attention.

How should clergy and congregations respond to the “starfish” of Trumpism in their preaching, teaching, and pastoral care?

I address that in my next post. For now, it’s important to realize that our work of resisting white Christian nationalism, conspiracy theories, disinformation campaigns, and domestic terrorism won’t end just because the largest head on the hydra is cut off.  As with that mythic beast, it may be that several more monstrous heads will appear in its place.

Yes, we can breathe a bit easier as the Biden-Harris administration comes to power.  But that deep breath will be needed for the work ahead. 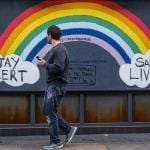 December 8, 2020 Pastoring During (and After) the Coup: Staying Alert, Telling the Truth
Recent Comments
0 | Leave a Comment
Browse Our Archives
get the latest from
EcoPreacher
Sign up for our newsletter
POPULAR AT PATHEOS Progressive Christian
1

Evangelicals Are Attracted to Conspiracy Theories—Why?
Divergence
Books by This Author Books by Leah D. Schade

I Cannot Do All Things
I currently work for a manufacturing company on an assembly line.  It’s...
view all Progressive Christian blogs
What Are Your Thoughts?leave a comment
Copyright 2008-2020, Patheos. All rights reserved.