The Feast of St Ignatius of Loyola is just winding down to a close. I thought that by the end of tonight, I would be able to publish a post about how I used to be completely deluded about the Jesuits. It’s still a post that I plan on finishing some day, but it unfortunately turned into a bit of a Protestant confession, therefore rendering it unpublishable. Perhaps one day, I will become a more mature Eastern Catholic person, and then I will understand how to write it better.

Instead of publishing that piece, I want to publish one photograph. It is a photo of an Eastern Jesuit. It is therefore a photo of a normal Jesuit. That is because I have come to understand that Jesuits are persons.

I will not say much more about this person, not even his name. Some will know who he is, and others will not, but that is not the point. The reason I can publish his photo is because I’ve already done so on Facebook and Twitter to say that he is what a normal Jesuit looks like. However, his story is not mine to tell; it is his, and perhaps he will tell us his name and his story one day. Or perhaps not. I am not publishing this photo to tell his story. I am just saying that he is a normal-looking Jesuit.

Fr James Martin SJ says that the joke about Jesuits is that if you’ve met one Jesuit, you’ve met one Jesuit. I have learned, in turn, that the Society of Jesus is truly a singular order in the Catholic Church. It turns out that it’s one of the only religious societies in the Catholic Church, if not the only one, that originated with the Latin Church but does not require its members to be ‘biritual.’ In other words, there is no need for Jesuits to be simultaneously part of the Latin Church if they belong to another sui juris church in the Catholic communion.

As I’ve begun to walk with Jesus in an Eastern Catholic church, Eastern Jesuits are starting to make a lot of sense to me. Let’s leave aside for a moment the politics of the Society of Jesus with Eastern Catholic churches, including how it was Polish Jesuits who reformed the Basilian Order for Ukrainian Catholics or the intimate ties between the Jesuits and the Russian Catholic Church. I hope, of course, to return to such events in due course, as learning about them (and other events) was important during my catechumenate for discerning whether I should enter into communion with the Bishop of Rome through a Byzantine church. Instead of talking about those things here, I want to say more simply that it seems to me at least that Jesuit spiritual sensibilities – built around, says, the daily examen, the Exercises, and the study of philosophy – are uniquely suited for Eastern Christian practices like hesychasm and the various services of the Byzantine church.

At least as far as I understand it (which may not be too much, since I am not a Jesuit), what Jesuit spirituality seems to be about is the person as a subject in a world in which invisible supernatural forces act. In order to be an acting subject in this world, a person needs to be taught how to discern the spirits, as the spirits are already acting on the person as a subject. The Holy Spirit, for example, gives graces that are consolations to a person, while desolations refers to how evil spirits act to take away the joy of a person. Jesuit spirituality and spiritual direction therefore does not boil down to a few techniques or slogans; it is instead a complete picture of a person acting intentionally and reflexively in a world suspended between nature and grace, as John Milbank presents the thought of Henri de Lubac SJ’s Surnaturel.

Is this not what Byzantine practice is also about? I am admittedly a neophyte when it comes to such matters. But it does strike me that if, say, the Divine Liturgy is about bringing heaven to earth, the icons are peering into heaven as a window, and hesychasm is bringing the intellect (the νους) into the heart, then it is at least also about situating the person as a subject to act intentionally and reflexively in the world of the surnaturel.

I am thus indebted to the Jesuits for my ongoing formation as an Eastern Catholic person, and I am especially thankful that the Jesuit who is the Bishop of Rome agrees enough with this analysis to have a Ukrainian Greco-Catholic protodeacon read the Gospel in Old Church Slavonic at the closing mass of World Youth Day as if it they had somehow morphed into a Divine Liturgy. In this way, an Eastern Jesuit is a normal Jesuit, because all that a Jesuit is – and all that an Eastern Christian is – is a person who is situated in a world that is supernatural. In this way, there is indeed no separation between analysis and devotion, politics and spirituality. Therefore, as we wind down on this Feast of St Ignatius, I am thankful to the Jesuits for continuing to teach me that all I can be in this mysterious world is a person. 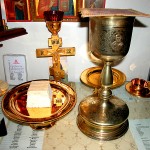 July 31, 2016
Found on Feast of St Ignatius: 'The perfect combination of sacrifice and just sheer joy and bliss'
Next Post 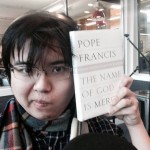 August 1, 2016 Pope Francis, Mother Teresa, and Year of Mercy on the secular radio
Recent Comments
0 | Leave a Comment
"I can't believe you would consider the theological lightweight Kilby as a proper critique of ..."
antoniodec Fiat mihi secundum verbum tuum: on ..."
""Milbank criticizes Balthasar for being apolitical in his aesthetic reflections, and I can see how ..."
antoniodec Reading Sobrino on Óscar Romero and ..."
"the word is receptive, which has nothing passive about it but could be the most ..."
antoniodec Fiat mihi secundum verbum tuum: on ..."
"One can never "go home," not in this life."
billwald I’ve found my way home: on ..."
Browse Our Archives
Related posts from Eastern Catholic Person