During the Holy Saturday Liturgy, the Byzantine churches read passages from the Hebrew Scriptures, culminating in the words of the Holy Apostle Paul:

Do you not know that all of us who have been baptized into Christ Jesus were baptized into his death? Therefore we have been buried with him by baptism into death, so that, just as Christ was raised from the dead by the glory of the Father, so we too might walk in newness of life. For if we have been united with him in a death like his, we will certainly be united with him in a resurrection like his. We know that our old self was crucified with him so that they body of sin might be destroyed, and we might no longer be enslaved to sin. For whoever has died is freed from sin. But if we have died with Christ, we believe that we will also live with him. We know that Christ, being raised from the dead, will never die again; death no longer has dominion over him. The death he died, he died to sin, once for all; but the life he lives, he lives to God. So you also must consider yourselves dead to sin and alive to God in Christ Jesus. (Romans 6.3-11 NRSV).

With petals strewn all over the ground, all over the tetrapod, all over the pews that shouldn’t even be there, the secret is all but out. Usually, Holy Saturday liturgies have rather small attendance; this year, because I was away at a conference, I could not even go. But I remember the one from my catechumenate – the effect is in fact the photo displayed above, which is my banner picture as well – and there we were, some old-timers and some interested Protestants, belting out, Arise, O G-d, as we watched our priest comically chuck bunches and bunches of petals from a basket he had brought out from behind the iconostas like a surprise.

Those who weren’t there – mostly everyone – came into the Pascha service that night bewildered. Who made such a mess of this place? What on earth happened here?

That is the point exactly.

Arise, O G-d is an interruption of the interruption. If Holy Saturday is the hiatus, the pause, the interruption of the world with the death of G-d, Arise, O G-d is the hidden interruption of that interruption, the surprise of the women who had been surprised that their Lord and God had died and now are surprised yet again – as Holy Mark the Evangelist puts it best, So they went out and fled from the tomb, for terror and amazement had seized them; and they said nothing to anyone, for they were afraid (16.8). The New Testament scholar Luke Timothy Johnson says that at this point, what you’re supposed to do is to read Mark’s Gospel all over again because it is through this moment of trembling fear – this interruption that interrupts even the interruption (my words, not his) – that this Gospel which features instance after instance of the disciples not understanding what Jesus is saying and doing finally makes sense.

For those of us younger Cantonese-speaking Protestants who first encountered Eastern Catholicism in Vancouver during the Hong Kong Umbrella Movement, Arise, O G-d was the first chant that we learned. We belted it in front of the Chinese Consulate in Vancouver, calling on the Chinese government to repent in the face of the Lord speaking through his people demanding their political dignity and agency. It should come as no surprise that for some of us in Vancouver, this political theology was what got us involved in the Eastern Catholic Church – in the Kyivan Church, in particular – because this was a church that did not only preach that Jesus was Lord, but actually practiced it without fear.

This is thus the song for our dangerous political times. When I write like this, I am sometimes charged with being partisan; I do not know which party I represent when I say these things, and I do not really understand why it seems to be ok for me to say political things about Hong Kong and not the United States. What I am doing is affirming the orthodoxy of the Protestant theologian Karl Barth, who writes:

The Gospel of the Resurrection is the – power of God, His virtus (Vulgate), the disclosing and apprehending of His meaning, His effective pre-eminence over all gods. The Gospel of the Resurrection is the action, the supreme miracle, by which God, the unknown God dwelling in light unapproachable, the Holy One, Creator, and Redeemer, makes himself known: What therefore ye worship in ignorance, this set I forth unto you (Acts xvii.23). No divinity remaining on this side the line of resurrection; no divinity which dwells in temples made with hands or which is served by the hand of man; no divinity which NEEDS ANYTHING, any human propaganda (Acts xvii.24, 25), – can be God. God is the unknown God, and precisely because He is unknown, He bestows life and breath and all things. Therefore the power of God can be detected neither in the world of nature nor in the souls of men. it must not be confounded with any high, exalted force, known or knowable. The power of God is not the most exalted of observable forces, nor is it either their sum or their fount. Being completely different, it is the KRISIS of all power, that by which all power is measured, and by which it is pronounced to be something and — nothing, nothing and — something. It is that which sets all these powers in motion and fashions their eternal rest. It is the Primal Origin by which they all are dissolved, the consummation by which they all are established. (Barth, Epistle to the Romans, p. 35-36).

To speak in the genre of theological politics is not to be partisan; it is to speak of the Lordship of Christ in his definitive word spoke by his bodily resurrection, the word against which the words of the gods (or elsewhere, Barth writes, the no-gods) are measured. The Resurrection is judgment on human politics; it is the standard by which the church performs the acts of makrodiakonia, the exposure of the big-picture apparatus of colonizing discipline and the word of liberation from them.

And thus, as we hear of wars and rumours of wars – of the bombing of Syria, the heightening of tensions with between the United States and North Korea, the pivot to China, the stories that range from conspiracy theory to material truth about the Kremlin, the emergence of far-right politics couched in the language of perpetual warfare – the song that interrupts Holy Saturday is the song the Church sings in interruption. Without fear, let us throw flower petals in exuberance; with song bursting from our bowels, let us call on G-d the Lord to judge these hawks of nations; as peacemakers named by our Lord in his Sermon on the Mount as the children of the Lord, let this song of judgment be our anthem of peace, making a mess when we should be in the abyss of mourning and all but giving away the secret that…

…Christ is risen from the dead, trampling death by death…oh, shh! 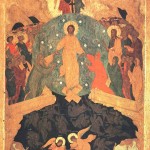 April 15, 2017
Into the depths: reflections on a catechumenate relived
Next Post 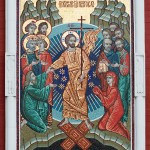 April 16, 2017 Christ is risen from the dead, trampling death by death #Pascha2017
Recent Comments
1 Comment | Leave a Comment
"I can't believe you would consider the theological lightweight Kilby as a proper critique of ..."
antoniodec Fiat mihi secundum verbum tuum: on ..."
""Milbank criticizes Balthasar for being apolitical in his aesthetic reflections, and I can see how ..."
antoniodec Reading Sobrino on Óscar Romero and ..."
"the word is receptive, which has nothing passive about it but could be the most ..."
antoniodec Fiat mihi secundum verbum tuum: on ..."
"One can never "go home," not in this life."
billwald I’ve found my way home: on ..."
Browse Our Archives
get the latest updates from
Eastern Catholic Person
and the Patheos
Catholic
Channel
POPULAR AT PATHEOS Catholic
1

The Dangers Coming From the 2021...
A Little Bit of Nothing
Related posts from Eastern Catholic Person