They say that 2016 was a pretty terrible year, and they (whoever ‘they’ are) seem to be amplifying the talking about this terrible year as Nativity draws near. I think this is, of course, because for most people, ‘Christmas’ and ‘New Year’ go together, as the Feasts of Our Father Among the Saints Holy Basil the Great and the Circumcision of Our Lord on January 1 and Theophany on January 6 don’t seem to be part of a popular modern consciousness.

I was not going to begin my Nativity post with this cliché about 2016 because, especially for Americans, to say that about 2016 is to talk about the election. However, I read a piece titled ‘On Losing Faith‘ by someone I haven’t read much of lately, Elizabeth Stoker Bruenig. In this piece, Bruenig describes her 2016, a year of job loss, murder in the family, and faltering faith that for the most part is not even hanging on by a thread.

I have been trying to write about makrodiakonia in Byzantine practice, and I said in my last post that, really, the way I’ve been learning about the service of discernment at the scale of ‘politics’ (that which concerns the polis) is just a scaled-out version of a more personal mikrodiakonia. In the same way, Bruenig shows us that we can talk about 2016 as a bad year at both scales too.

If 2016 was a terrible year – and it most certainly was – then the litany must be recited to get our conversation immediately away from the election, important as that was: Brexit, Aleppo, the Syrian refugee crisis (or how about just a refugee crisis, period), the Zika virus, the Nice attacks, the Berlin attack, the election of Duterte in the Philippines and the street killings that have come with it, and the emergence of far-right nationalisms, including so-called ‘alt-right’ white nationalisms. It goes without saying that in this Hong Kong election year, 2016 has also been a disaster, as a purge of pro-autonomy and pro-democracy lawmakers is happening in Legislative Council. Ecclesially, the year began with an Anglican Communion primate’s gathering that seemed to be more about finding wiggle-room than about doing theology, as well as a Joint Declaration between Pope Francis and Patriarch Kirill of Moscow that relegated Eastern Catholics to ‘ecclesial communities’ and called Russian aggression in Ukraine ‘hostility’ and ‘conflict’; it ended with four in five white evangelicals voting for Donald Trump. Cardinal Zen has also had quite a year trying to convince Pope Francis that a deal with the People’s Republic of China (PRC) would be a bad idea. Pile on top of that the passing of Prince, David Bowie, and Alan Rickman, and it is immediately understandable why everyone is so scared about Carrie Fisher too. And then, there is the icing on top of the cake: the circulation of all of this news comes also amidst a vortex of fake news.

As I said in my last post, the task of makrodiakonia as the art of political discernment calls us back to the liturgy, and as Nativity draws near, my temple in Richmond has been rehearsing the refrain for Nativity Compline, which many temples will do tonight: God is with us! Understand, all you nations, and submit yourselves, for God is with us! Having gone regularly to Immanuel Moleben during St Philip’s Fast, this refrain feels quite climactic from both the Exaltation of the Icon of the Theotokos of the Sign (‘We extol You, O Christ the Giver of Life, for by fulfilling the sign foretold of Immanuel, You revealed Yourself the Saviour by the prophets foretold’) and the response during the Praises (‘Immanuel, God-with-us, have mercy on us’).

This is a macrodiaconal declaration, if there ever was one. It is easy, of course, to miss this declaration as an act of political discernment because it can sound almost fascist to ears still ringing from the traumas of modern colonizations, totalitarianisms, and fundamentalisms. Is this not a call for religious nationalism, even militarism? Is this not the very kind of thing that is eviscerating contemporary liberal niceties of rational tolerance? Are these not the declarations that unleashed so many of the terrors and political upsets of 2016?

I suppose this depends on who God, us, and the nations are. There is, I suppose, a fascist way of reading this that is perhaps borne out by recent observations regarding the emergence of white nationalisms from within certain strands of Orthodoxy. When I shared said article from Religion Dispatches discussing this ethno-ecclesial collusion, Owen White did not mince words on Facebook (his settings are public, and so were mine, when I first shared these words):

Both the liberal Orthodox and the movement conservative Orthodox will in various ways deny, deny, deny that this is of the essence of Orthodoxy. But this article is spot on. What the hell do you think is going to happen other than this? Orthodoxy is a religion which deifies the ethnos, and it regularly and usually associates certain cultures (always centered in an ethnicity) with the kingdom of God and spiritual maturity.

Given White’s abrasive comment, it is quite encouraging of course to see on the flip side that there have been recent attempts to mitigate this theological trouble among the Orthodox, especially by the Ecumenical and Romanian Patriarchates regarding Orthodox fundamentalists blocking the reception of the Holy and Great Council. Also, a tragically beautiful statement has been put out by Patriarch John X of Antioch on what he calls the ‘ecumenism of repentance.’

But for White, there is another surprising source of hope against this kind of militarizing nationalism that plagues Orthodoxy. As he proceeds in the comment thread:

The real reason that the Orthodox hate the Eastern Catholics is that Eastern Catholics show that Eastern Christianity can be lived and practiced without ethnos/nation being elevated to a foundational part of the faith. Ethnos and culture may be very important. Nation may be somewhat important. But none of that is a necessary or fundamental part of the faith in Eastern Catholicism. And that is the single thing that Orthodoxy cannot abide, because before all else, Orthodoxy is the deification of its given national cultures.

In other words, the only way you get a fascist reading out of the Nativity Compline refrain is if you, as White says, ‘deify the ethnos’ – God is with us (as an ethnos), so understand all you other nations and submit yourselves, for God is with us. To mitigate against accusations that I may be using the word fascist loosely, what such a reading would do is to overtly militarize the faithful as an ethnos to conquer the nations. Whether or not White is being too kind when he says that Eastern Catholics don’t have this problem (I think he may be overly courteous to us), my point of agreement with him is that this fascist reading – this call to the militarization of everyday life – is theologically untenable and should be rejected by all Byzantine Christians, regardless of whether they are in communion with Rome or not.

God is with us! G-d comes among us in diaconal form; G-d performs makrodiakonia here. If there is a story to 2016’s terribleness, much of it is that the nations are jockeying for power. The world that has been created by the struggles of the nations is one that we now describe as a set of ‘post-fact,’ ‘post-truth,’ hyper-privatized spheres of communication marked by ‘fake news’ and misinformation. Once hailed as a tool of occupy protests, social media is being declared the vehicle for this kind of ideological warfare. Whether in the United States, the United Kingdom, Hong Kong, Ukraine, or Syria, the results of this world of illusion are unmistakably material in the everyday lives of deepening poverty, disenfranchisement, and revanchist resentment, if not outright militarized destruction – and to add insult to injury, people living in such conditions have sometimes been reviled by the globalist makers of illusion as deplorables.

If this world of absurd illusion and material deprivation is the one that the nations are creating, who is the us? Is it not the very people who are derided as deplorables, who are easily fooled by fake news because we want to make a better world now and are getting conned by the hyper-wealthy in the process? Is it not us who struggle to make sense of the mire and muck of this post-truth world and in the process turn against each other to fight among ourselves because poverty of material, intellect, and spirit is not at all romantic when it creates real situations of desperation? Are not we who call ourselves Christians part and parcel of this very mess as our sojourn is based on the prayer Lord Jesus Christ, Son of G-d, have mercy on me, a sinner?

G-d is with us this Nativity 2016 in a profound act of makrodiakonia. Coming as a powerless baby to colonized peasants forced by imperial power into an overcrowded town for a census, the G-d who is among us calls the nations to understanding. The ideological fictions of the nations will dissipate like chaff before the wind, and the people will recognize the smallest among them as the entry of the kingdom of G-d among us. And submit yourselves: that G-d is in our midst means that even these post-truth, militarized nations that even now grow fat on capital, domination, and creative destruction will submit before the dignity of the smallest of human persons as the very icon and likeness of G-d. The Lord said to my lord, ‘Sit at my right hand until I make your enemies the footstool of your feet.’

It is therefore no surprise that in the Byzantine churches, the greetings change as Nativity comes. Even now, we say, Glory to Jesus Christ!, to which the response is Glory forever! But when Nativity comes and as we declare that God is with us, we say, Christ is born! The answer is: Glorify Him!

Lord Jesus Christ, Son of G-d, have mercy on me, a sinner. As this war of misinformation may tempt even me to make ideological alliances for survival as these post-truth nations increase their power and buttress their military might, let me a sinner declare with the people whose praises you inhabit: God is with us! Understand, all you nations! And submit yourselves! For God is with us! 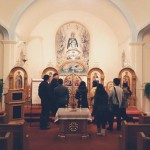 December 23, 2016
Late for an Umbrella Movement retreat, I learned makrodiakonia as the art of political discernment by accidentally walking through the deacon door
Next Post 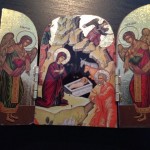 December 24, 2016 Taking the secret of the Nativity everywhere with the portable icon I got at my chrismation
Recent Comments
0 | Leave a Comment
Browse Our Archives
Follow Us!