The Peace of the World: Egregious Twaddle on Pilgrimage

The Peace of the World: Egregious Twaddle on Pilgrimage September 17, 2012 Joanne McPortland 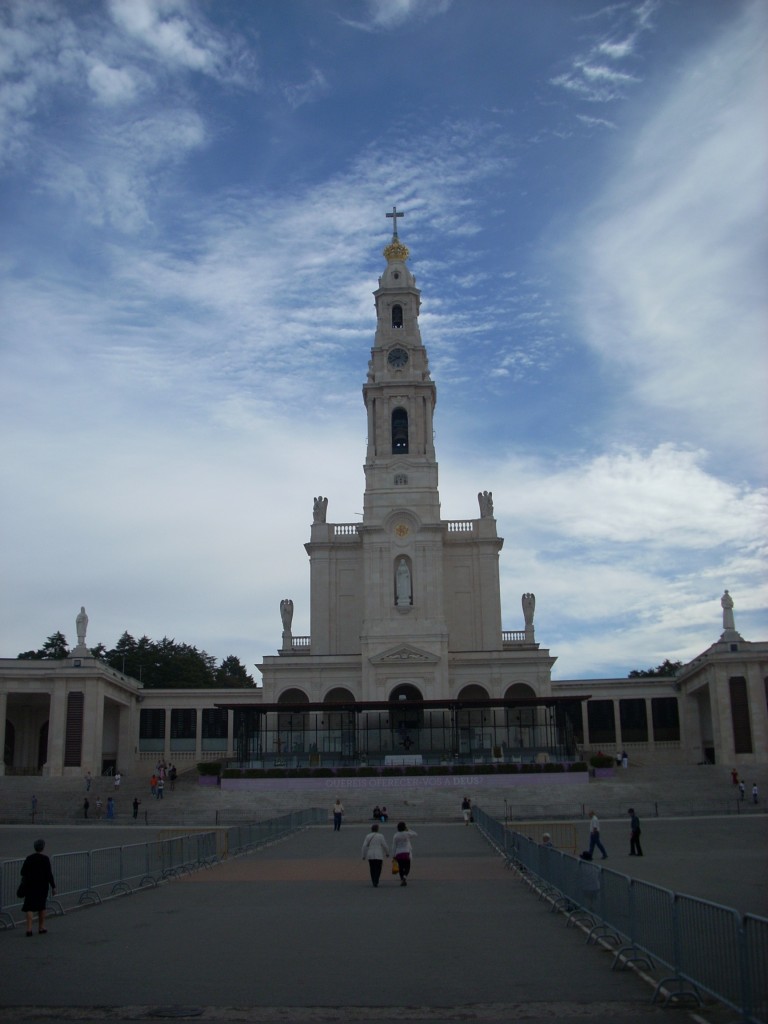 “Tell everybody that God gives His graces through the Immaculate Heart of Mary. Tell them to ask graces from her, . . . for the Lord has confided the peace of the world to her.” ~ A message from the Lady of Fatima, according to Lucia

We pilgrims spent yesterday in Fatima. In the early morning, a tour of the Sanctuary, the huge devotional complex that encompasses the Chapel of the Apparitions on the site where the Lady most often appeared to the three children, the massive Basilica of Our Lady of the Rosary, the Sacred Heart fountain, the High Cross, the colonnades (modeled after Bernini’s in St Peter’s Square, but with arms open wide to embrace the world), and the new Church of the Holy Trinity. We took a group photo on the plaza, all 3 score and 10+ of us staring into the white-hot sun just long enough to say queso.

Then off to visit the village of Aljustrel, where the little shepherds lived, and the wooded hills of Valinhos, from which they drove their sheep each day to the small bowl-like valley called the Cova da Iria. (That’s Iria, the floating Visigothic martyr again. I told you she travels. And it’s no coincidence her name means peace.) The afternoon was our own, for lunch, shopping for religious goods among the vendors whose shops line the colonnades in town, personal devotion, and siesta. We had Mass in the early evening in the Chapel of the Resurrection, one of the new chapels on the crypt level of Holy Trinity. Then dinner together in our hotel. After dinner, many joined the Candlelight Procession. Fr Rob Waller, pastor of St Andrew’s in Milford and one of our pilgrims, gives you a taste of that here.

The Little Valley of Peace

But no itinerary can capture the ineffable peace of Fatima, the grace of the place. The dazzling sun through the trees, dancing and throwing rainbow rays as wonderfully as it did on October 13, 1917. The wedding-cake whiteness of the Basilica, stark and much more beautiful in person than in pictures, against the Mary-blue sky. The woman crossing the vast expanse of the Sanctuary plaza on her knees, a child occasionally whispering encouragement in her ear. The warm stone walls and tiled roofs of Aljustrel, and the Valinhos hillside covered with holm oaks and olives and scented heavily with pine and sage, quiet as it must have been when the children kicked up the dust on the sheep path—until chatty Portuguese families, 4 generations out on a stroll to visit their Mama Maria on a Sunday, pass by, smiling. The people lining up with armloads of flowers and other gifts to leave for the Lady, or purchasing candles, or writing intercessions to be posted in the gray mailboxes that I am convinced lead directly to heaven.

It’s a peace and a grace, as Fr Jan Schmidt, pastor of St Margaret of York in Loveland, reminded us in his homily last night, rooted in two inevitabilities: not death and taxes, but suffering and the love of God. Fatima, no less than Lourdes, acknowledges the suffering of our fallen humanity and reaches to heal it, but here the emphasis is on those things that are out of joint with our own spirits and that of the world. Sin—most especially those breaks with innocence that disturb the peace Christ promised (not only sins of the flesh, Sr Lucia later explained, but the even worse acts of injustice against the poor and the vulnerable)—and war, with its deadly consequences and collateral damage, are what the Lady came to lament.

But at Fatima, it is not miraculous water that is the instrument of the healing Mary intercedes for. It is the redemptive suffering entered into by each person who hears her message—from young Lucia, Francisco, and Jacinta to those of us who stood in the Cova da Iria yesterday—that will make the difference. “Are you ready to offer yourself to God?” These words of the Lady, in many languages, hung as a banner for the outdoor Mass. They made us think, and pray, and wonder.

Personally, Fatima is the place I was least looking forward to visiting. I grew up at the height of Catholic anti-communist fervor, when the Lady of Fatima, with her scary apocalyptic secrets and messages interpreted with a heavily political slant, was used more as an ideological weapon in the Cold War than as a means of drawing closer to Mary and her Son. There is still a lot of that associated with Fatima today among US Catholics, so I was stunned to find that there is none of it visible there. What there was was peace, the same palpable presence of God’s inevitable love I have encountered at the Shrine of the Virgin of Guadalupe at Tepeyac and in the cloister of San Damiano at Assisi. This is truly one of those places where heaven breaks through into earth in the form of sacrificial love, the twinned flames of the Sacred Heart of Jesus and Mary’s Immaculate Heart burning away every other bit of nonsense. I am so grateful to have been there and found it unimaginably and undeniably home.

Life on the Road

Of course our pilgrimage is not all moments of ecstasy—though the count of those is extraordinarily high. Traveling in such a large group, on a fixed schedule, in unfamiliar places can provide lots of little agonies to offer up. We’ve had a couple of wallets go astray, whether by carelessness or pickpockets is uncertain. The wine and the water and the milk for the cereal aren’t always cold enough. European cobblestones, slopes, and uneven stairs (long flights of them; no elevators and not many ramps in medieval cities!) play hell with those of us in less than pilgrim trim; I am the worst offender there, puffing and sweating and aching along in the rear, trying desperately and unsuccessfully to keep up with my 81-year-old roommate. We almost created a new martyr in Aljustrel, when the tallest pilgrim in our group thwacked his skull on a low lintel. (He wants us to add the Shrine of the Bloody Doorway to the next pilgrimage.) For one woman, traveling with her sister, the whole pilgrimage thing is itself a Way of the Cross, and having to wait until I can get the Reds’ scores for her on the internet a day late a heroic act of reparation. (When we were given our “whispers”—the radio mikes our guides use to talk to us in churches—she asked if they could be tuned to WLW so she could catch Marty Brenneman.) The fact that I, a Dodger fan, am researching these scores for her is a tiny act of reparation on my part.

In general, though, God is looking out for us. Please continue to keep us in your prayers, as we do you in ours.

Next: Fatima to Salamanca, by way of Coimbra 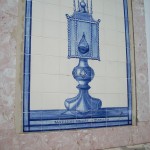 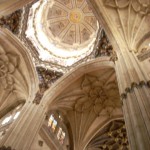 September 20, 2012 Finding the Frog: Egregious Twaddle on Pilgrimage
Recent Comments
0 | Leave a Comment
"Well if you put your self in her, Iam 100%,I have done the same, I ..."
Boston Mwanakatwe simbeye Wrong Choice, Bad Love: Why Bernadette ..."
"OMG GET A LIFE, really you are just twisted, this women went THROUGH HELL, god, ..."
Russ Wrong Choice, Bad Love: Why Bernadette ..."
"You are all Bloody Idiots, you have heard bits and pieces of what went on ..."
Russ Wrong Choice, Bad Love: Why Bernadette ..."
"Elinor, I was catechized in the pre-Vatican II Church and it was awful, no Scripture, ..."
RPlavo . What’s Really Wrong with Catholic Religious ..."
Browse Our Archives
get the latest from
Catholic
Sign up for our newsletter
POPULAR AT PATHEOS Catholic
1