Catholic and Crazy: The Asylum of Faith

When you’re locked in a rubber room, wearing paper pajamas that leave far too little to the imagination, trying to find patterns in the ceiling tiles as cracked as your brain, you wouldn’t expect to find yourself conversing with the spirit of an Irish teenager 1400 years dead—murdered by her own father, the story goes, when she resisted his incestuous advances. But that’s how it works when you’re Catholic and crazy. The communion of saints means we’re never alone, even in a psych ward.

In 2009, when I found myself in said rubber room and said paper jammies, pouring out my heart to St Dymphna, I wasn’t even technically Catholic. I was an Episcopalian, at a particularly low point in what I now know is a lifetime of (until last year) largely untreated mental illness. That morning in April, I’d casually mentioned in a Facebook message to my best Episcopal friend that I didn’t want to be alive. Friend that she is, she saw right through the casual and recognized that this was more than just my usual blue mood. She called our Episcopal rector, who, after asking me where God was in all of this and hearing me respond “Nowhere,” bundled me off to the emergency room of the local hospital where he was a board member. He and my friend were upbeat and supportive, until they heard me tell the intake nurse that I did indeed have a plan for hurting myself. That shocked them, almost as much as it shocked me to hear it coming out of my mouth; I was so deep in the abyss of depressive apathy that I couldn’t manage to reassure them with a reminder of how terrible I am at following through on plans, even on the best day.

I just thought I’d get someone to talk with me or medicate me or something, but instead the word plan set off an immediate march behind the locked door and the surrender of all my clothes. I was handed the paper pjs and told to wait until a doctor came to evaluate me. I sat on a gurney for close to 3 hours, alone with my distorted thoughts. About an hour in, I started to pray—old Catholic prayers from childhood, the Hail Mary and the Memorare and the prayer to my guardian angel. And then, because even when I am crazy I still know the patron saint for every occasion, I started asking Dymphna for help.

This post is a response of sorts to a couple of questions posed this week to Patheos bloggers, as part of a month-long conversation on religion and mental illness. May is National Mental Health Awareness Month, and the conversation has been provoked by the release of Amy Simpson’s Troubled Minds: Mental Illness and the Church’s Mission—a terrific book I’ll be reviewing next week. Simpson’s book draws primarily from an evangelical Christian perspective, and I think it’s important to be part of the wider conversation from the point of view of both a Catholic and a person with mental illness.

The questions: How has your religious tradition historically seen mental illness? And how does your faith, today, shape the way you see mental illness?

With regard to the first question, I’m not an expert on the history of Catholicism’s approach to mental illness, but I suspect that (true to the universality of its name) Catholicism has tended to have a broader, more tolerant, more inclusive embrace of the mentally ill over the centuries than is reflected in, say, the churches profiled in Amy Simpson’s book. That is not to say that Catholics weren’t guilty of stigmatizing, torturing, and neglecting the mentally ill at various times and in various places; that appears to be a human fault, not one that’s specifically denominational. But there have been some Catholic milestones in the history of dealing with the presence of the mentally ill in the community.

That day in 2009, I convinced the doctor who finally checked on me that I was not a threat to myself or others. I learned to hide my continuing illness from my family and friends, not because they didn’t care but because I didn’t want to cause them grief. I left the Episcopal Church in early 2010, went to Rome on pilgrimage that summer, and returned to my Catholic roots that Advent. Meanwhile, the illness was bubbling underneath, depression and anxiety emerging as full-blown hoarding disorder. But this time, when I asked for help last fall, my faith and its embrace of all of us afflicted—underlined by a Marian pilgrimage last September that included Lourdes—gave me the grace to accept the help offered so generously and wholeheartedly.

Find excerpts, an author profile, book reviews and more about Troubled Minds: Mental Illness and the Church’s Mission by Amy Simpson at the Patheos Book Club.

Participate in the month-long conversation on mental illness and faith at Adrian Warnock‘s blog. Comment or post a link to your own blog here. Join a live video conference on Wednesday, May 15, at noon Eastern time.

May 9, 2013
Seven Buses: The Love That Builds Bridges
Next Post 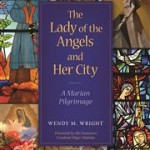 Catholic
A Musical Birthday Card to (and from) St...
Egregious Twaddle
TRENDING AT PATHEOS Catholic