The Social Media of Hell (Dante) 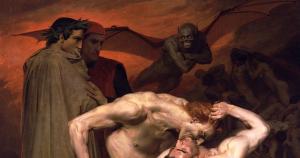 People, especially people’s troubles, are not fit entertainment, but can be entertaining. That’s not good. We need justice, but doing justice is not so we can make a Netflix series and gaze slack jawed at the bad guys and marvel at their talk.

A Christian is called to love his enemies and that’s hard to do if they are providing your amusement for the evening. Social media can send a swarm of us after the latest example of someone breaking down or being taken down on Twitter.

When I participate, I am going down to Hell and listening to the endless natter, the continuous stream of accusations, justifications, and whines that mark the damned or so Dante’s Inferno would suggest. There Dante gets stuck in a dangerous place, because he wishes to hear the social media stream of damnation:

I was all intent in listening to them, when the master said: ‘Go right on looking and it is I who’ll quarrel with you.’ When I heard him speak to me in anger I turned and faced him with a shame that circles in my memory even now. As a man who dreams that he is being harmed  and, even as he dreams, hopes he is dreaming, longing for what is, as though it weren’t—so it was with me, deprived of speech: I longed to seek his pardon—and all the while I did so without knowing that I did. ‘Less shame would cleanse a greater fault than yours,’ my master said, ‘and that is why you may set down the load of such remorse. ‘Do not forget I’m always at your side should it fall out again that fortune take you where people are in wrangles such as this. For the wish to hear such things is base.’

Obviously, gorging on bad news, idle curiosity about damnable actions, is not good for the soul.  Why isn’t it? The souls in Hell are justly condemned: they have chosen evil over good and said “no” to God. There is nothing else to be done with them, their “no” counts as “no” and justice cannot ignore injustice. Often the stories of the damned are true confessions, if never actual confessions. Dante’s damned are eager to be remembered by the living so will (sometimes) tell their stories, often full of unknown details to the living. People judged just are shown as twisted or are condemned by those alive for sins they did not commit while the true evils are unknown.

God have mercy on us all.

And that is the problem. When Dante stands and listens, he is not doing to the damned as he would have done to him. God hears and judges. In this life, some are called to judge in courts, but hearing evil is taxing on all but God. Only God’s perfect love and justice can swallow up the wicked social media stream of Hell and be unmoved. The rest of us should dwell on the good, truth, and beauty as much as we can.

This is why we honor those, such as our police, who must face the hellish nature of life. The job is wearisome.

If this is true, then delight or curiosity in what we do not need to know to do justice is bad. The evils we hear cause us to  participate, however indirectly, in the harm and so we harm ourselves in our curiosity. This is not the greatest evil, blush worthy, but not unpardonable. Instead, we must (I must) turn from evils I need not know, have pity on those whose sad stories I cannot avoid, and pray for the harms done in this wicked world.

May I move on, look up to the stars, and leave base desire behind in Hell where it belongs. 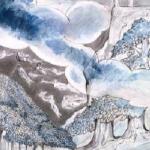 April 1, 2019
The Nicer Parts of Hell: You Get What Justice and Love Can Give
Next Post 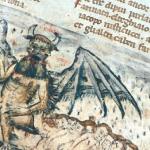 April 3, 2019 No Zombie, Not Alive, Not Quite Dead Yet
Browse Our Archives
Related posts from Eidos