Joseph: the Man at Christmas (Reflections on the Tenth Day of Christmas)

One day in school a teacher asked what growing up with a disabled parent had taught me. I did not know what to say, because this had never occurred to me before that moment. Dad was Dad: the sort you asked for wisdom, because he knew. There were some differences, I suppose. He did not teach me to drive, though not being to blame may be in his favor.

Dad had something to say, but mostly he lives a life of integrity. He was willing to lose a job rather that compromise the truth and meek enough to allow others to misunderstand rather than slander and smear.

He reminds me of Saint Joseph this Christmastide. Joseph is too often overlooked. He stands in most Crèches a bit stiff as a figure. Only a great artist can show the strength of a meek man.  When the story is told, he has an adopted Child who is the center and a wife who speaks Magnificat. Joseph was a dreamer with a divine calling willing to serve as God called.

He played the role God gave him. He had enough integrity that he cared less with what the community believed than with the truth God revealed. If his wife had a son that was not his, then Joseph accepted what this would mean and proceeded apace. He consented to God’s call to love his wife and His Son.

Joseph, like my dad, demonstrates that no personality determines Biblical manhood. The role is as sure as creation, but the type is gloriously diverse. Deeper still is the Divine mandate to do justice, love truth, and show mercy. All of us, every player in Christmas for all time, has the choice of consenting to the truth. There is no place for tyranny, bluster, bluff, abuse of power in the Stable. If you wish that vision, then visit Imperial Rome or Herod’s Jerusalem.

Joseph went to Egypt with the Holy Family. He imitated the other dreamer in Sacred Scriptures: Joseph with his Amazing Technicolor Dreamcoat. Like the first Joseph, Mary’s husband saved his family, but unlike that Joseph he never became the star. If your son’s mother is the Mother of God and his real Father is God, then you take another way.

Love knows nothing of equality. Love venerates the Beloved and recognizes the image of the Beloved in whatever person they love. Equality is a useful legal fiction in a broken world. We cannot trust the state or institutions in a broken world. Fortunately, the Divine economy finds a place for each individual which is perfect for them, a role that fits generally and then amazingly allows for individual expressions of that role. When God comes, He asks for an obedience that liberates and transforms. We become truly ourselves within a Divine Economy we do not control.

Against this, the tyrant, the one who hates love, is motivated by fear to use power to coerce. This never works and always is smashed by the pure devotion of Mary and her husband standing by her side: Joseph. He found the Way and was himself. There are many such ways, many possible paths to play the role men are called to play in God’s economy, this and every Christmastide. 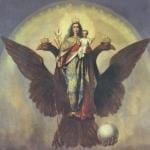 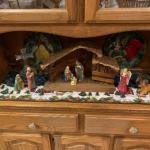 January 4, 2021 All Grown Up (Eleventh Day of Christmas)
Browse Our Archives
Related posts from Eidos