So Cold, So Calm, So Holy a Night (RMS Titanic Day) 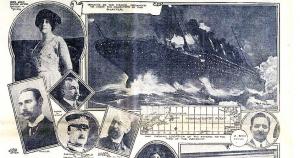 The false normalcy harkens a change, a certain doom, but the winds of the Spirit are coming to rescue the faithful.

The sea was very calm, like a pond, like glass, so the eyewitnesses say, the night the great ship went down. RMS Titanic went down into the depths of The Atlantic Ocean in pacific and frigid sea. The sinking at the time seemed a portent and if any event ever was an outer sign of great changes in the fates of nations and men, the sinking of Titanic was a warning. A mental confusion of the moderns that saw “nature” as something to be conquered by “science,” as if we were not part of nature, got a first jolt. World War I would demonstrate that power of men over “nature” amounted to destruction of people and the means of our survival. When the ship began to sink the ancient rules, the deep truths of God made sense and vain philosophy was forgotten.

One could embrace “every man for himself” or “greater love hath no man than this, that a man lay down his life for his friends.” If you rushed the lifeboats, history was certain: you were a cad. If you died so others could live, then the judgement of history was sure: you were a hero. Imminent death concentrates the mind wonderfully. Power, wealth, knowledge, credentials cannot save a man at the hour of death. If you refuse the death of a hero, prolonging life by sneaking into a seat that belonged to someone else, then you are still dead now. You have faced the Judge who cannot be corrupted and shows not partiality.

When the choice was made to steam ahead, plow through placid seas, the doom of the RMS Titanic was certain. Normalcy, the placid sea, was a sign of icebergs dead ahead. The wireless warnings from voices of the invisible were ignored and the doom came. When it came, when the watertight compartments began to fail, when the ship began to settle, still some trusted in the old order. They refused to descend to little “egg shell” lifeboats when the sea was so calm, the band was playing, and the deck of Titanic felt safer than leaving. Wasn’t fear irrational? And what about that ship that appeared to be nearby, the California? Can’t they come and save us?

Some that should have left did not. Others panicked, rushed the boats, and saved themselves by ruining their reputations for all time. They saved their lives and lost their souls. God forbid we save the company, some Christian version of the White Star Line, and lose our souls.

Those on the lifeboats rowed away and the ship went down. The sea was calm, the stars magnificent. Nothing seemed to have changed. A few hours passed and the water grew rougher, the lifeboats began to take on water. Things seemed ever worse, but then the sun rose and a rescue ship, the Carpathia, came. Getting to the rescue ship seemed dangerous, but the great danger was over.

Sometimes when I think of great changes in history, or the many changes that must come in my life, I think of this image: what seems calm, dangerous; the choppy, hopeful. The little lifeboat is safer than the greater liner. The image applies to a society or to one soul. The mighty are laid low, a remnant returns.

If we find ourselves, so often, in a lifeboat, the world, flesh, and devils having failed us again, there is hope. Rescue is coming. The old is passing away and a rescue ship, the ark of the Church, is driving towards us. Get aboard! Give up pomp and power! Go home! The choppy waters may seem dangerous, but they are a sign of a new day.  When the waters stir, as the Son rises in the East, we can hope to come as a remnant, purged of power and glory, to safety for all time by the intercession of the Theotokos. 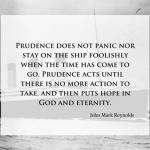 April 15, 2021 The LOL of Winning
Browse Our Archives
get the latest from
Eidos
Sign up for our newsletter
POPULAR AT PATHEOS Evangelical
1 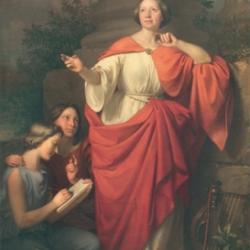 Exposing a Misguided Teaching
Most errors circulating in the Christian world today can be found in...
view all Evangelical blogs
Copyright 2008-2021, Patheos. All rights reserved.