The Departure of Merlin at The Oddest Inkling

The Departure of Merlin at The Oddest Inkling June 13, 2016 David Russell Mosley

Particularly for those of you who have begun to read these letters since they moved to Patheos, I want to let you know that I have written two essays for The Oddest Inkling on Charles Williams’ Taliession through Logres. Today my essay on “The Departure of Merlin” has gone live so make sure you head over to The Oddest Inkling to check it out. Below is a short excerpt hopefully to whet your appetites.

It seems to me one could almost argue that Taliessin through Logres is about Galahad and his father Lancelot more than it is about anything else. It is not even a grail quest since we never properly see the grail in any one poem (perhaps intentional on Williams’ part so that it leaves us with the Quest, that we must seek out the Grail). As you read through the book, you find Lancelot several times ending an individual poem, as well as being part of the focus of the book overall. Lancelot signals the beginning of Camelot and Arthur’s rule in Logres in “The Calling of Arthur.” He signals its fall in “The Star of Percivale” when he looks to the Host and sees not Christ but Guinevere (though he is not alone at fault since Arthur sees naught but himself). And yet Lancelot performs a meaningful mass, that will be discussed later, at the very end.

June 12, 2016
Transcendence and Immanence: Responding to Richard Beck on Sacramental Ontology
Next Post 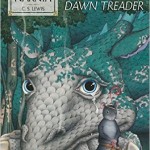