What My Dogs are Teaching Me About (the Limits of) Grace

Last winter, I wrote a blog post titled “What My Dog Is Teaching Me About Grace.” So poetic, that post. All about our beautiful but neurotic rescue dog, Eddie—how he came to us after years of neglect, possibly abuse, how he needed a second chance (actually, many second chances), and how we would give him those chances, despite his not-always-lovely behavior. People loved that post, especially animal lovers. They shared it with their Facebook friends. A well-known web site offering a Christian perspective on human relationships with animals reposted it. I basked in the attention, enjoying a rare moment of blogger glory in which I managed to write something that got plenty of attention, all of it positive.

So I was dismayed and embarrassed when, just a few weeks later, I had to come clean in this post, in which I admitted that Eddie’s second chances had come to an end, and we could not keep him.

On the night that our dog trainer called to let me know that Eddie’s former foster mother could take him back until they could find a new home for him, I lay in my bed and just cried, saying over and over, “No! No one else can have him. He’s mine. He’s ours.” I felt such loss, such failure. The fact that I had waxed poetic to the world about how we would accept Eddie no matter what, mirroring God’s radical acceptance of us no matter what, made it worse.

For now, this story has a happy ending. Just a few weeks after he returned to his foster mom, Eddie was adopted by a minister and his wife, who wanted a companion for their Irish Wolfhound. Eddie loves other dogs, and he is reportedly happy living a quiet life in this childless, dog-centric household in the Connecticut countryside.

And yesterday, we brought Cooper home to live with us. 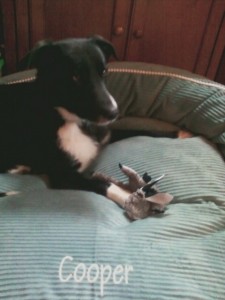 We don’t know much about Cooper’s past. He was found, starving, on the streets of a town in Tennessee. A rescue organization recognized that Cooper’s friendly, trusting manner would make for a good pet, and brought him north to recuperate. In his foster home, he put on weight and proved ready and willing to learn basic commands. He got along well with the family’s children and other dog. (Cats are another story….more on that in a minute.) Cooper’s photo on Petfinder caught my eye because he reminds me of the black-and-white mutts I had as a kid—likely part border collie and part lots of other stuff.

I am hopeful that Cooper will be with us for many years. I’m glad to give him a second chance. But I’m not going to write a treatise about grace this time around. Loving Eddie taught me about the limits of grace. This is the hard part of loving others, human or canine. Sometimes we realize that the best way we can love another is to say “no,” to do the thing that looks least like love. I believe that Eddie is better off in a childless home, and that we are better off with a dog who doesn’t pose a danger to my and other people’s children. But giving Eddie away, forcing him to start over again with a new family, felt cold-hearted. It felt like judgment, not grace.

This can happen in our relationships with people too, can’t it? Parents, for example, can realize that the most loving thing they can do for an adult child mired in addiction is to say, “No, you cannot live with us. No, we will not pay your rent for you,” even if saying “no” means that beloved child will end up homeless, on the street, in danger. A spouse might realize that the most loving thing they can do is to say, “No, I’m not going to keep listening sympathetically as night after night you complain about how miserable you are at work, knowing that you are not following up on any of the good advice and connections others have offered you for finding a better job.” Sometimes grace, acceptance, and forgiveness have limits. Sometimes heeding those limits can even be a good thing.

So we’re starting over again with Cooper, with the benefit of some hard-earned wisdom of what it means to love a damaged being. That’s not a bad thing to learn in this fallen world, given how damaged all of us are.

Which reminds me of the other thing that both Eddie and Cooper have and are teaching me, about my limits and shortcomings as a mom. So many parents report that when they first bring that little bundle home from the hospital, they feel like posers. Amateurs. They panic, wondering how on earth they are supposed to know what to do with this actual human being who is now theirs to raise.

For whatever reason, I’ve rarely experienced this sort of crisis of confidence with my human children. I’ve certainly wondered about the right way to handle something. I’ve certainly made mistakes. But for the most part, I feel confident that I can handle things, that I’m equipped to be a pretty good mom, that most of the time, I have the wisdom, tools, and support to figure it out.

Not so with my canine children. I went back over my Facebook feed from last October, when we got Eddie. Four days in, I felt like the worst mom in the world. The cat was so angry and stressed that she stopped eating. Eddie was struggling with not being able to run free in our yard (we hadn’t yet gotten our fence installed). I felt like a complete, utter failure who was making these poor animals miserable.

And guess how I felt again yesterday, when Cooper chased the cat mercilessly, and the cat stopped eating, and I became convinced that Cooper is going to kill the cat and scar my children for the rest of their lives? Like a complete and utter failure. I actually begged God last night, “Pleasepleasepleasepleaseplease don’t let Cooper hurt Stormy!” I began to wonder if we had, once again, made a huge mistake by bringing this dog into our home, a dog whose cat experience is quite limited.

Thus far, our family dogs have done more to convince me of the limits of both grace and my own pathetic parenting skills than 12 years of raising children. I’m not sure what lesson to take from that. (You are welcome to make suggestions in the comments. Please, tell me what I’m supposed to be learning!) For now, I’m trying to solve the problem right in front of me rather than worrying about all the other problems that might come along. From Matthew 6: “Do not worry about tomorrow, for tomorrow will worry about itself. Each day has enough trouble of its own.” Indeed. We’re keeping Cooper leashed at all times, so that the minute he sees the cat and those little ears perk up, we can give a firm tug on the leash with a clear “No!” to get across the message that the kitty is not prey, but part of his pack. Hoping desperately that this will work.

But if you feel like offering a prayer that the dog doesn’t slay the cat, I’d appreciate that too.

May 1, 2012
The Scary Side of Noninvasive Prenatal Testing
Next Post

May 4, 2012 Patheos (& Other) Peeps: On Marilynne Robinson and the Fear Culture
Recent Comments
0 | Leave a Comment
Browse Our Archives
Follow Us!