As the one-year anniversary of my book publication approaches in January, I’m devoting Fridays from now until the end of the year to revisiting the book’s major themes. Each Friday, I’ll post an excerpt from No Easy Choice: A Story of Disability, Parenthood, and Suffering in an Age of Advanced Reproduction. This week’s excerpt focuses on the rapidly growing practice of “fertility tourism,” particularly in India. 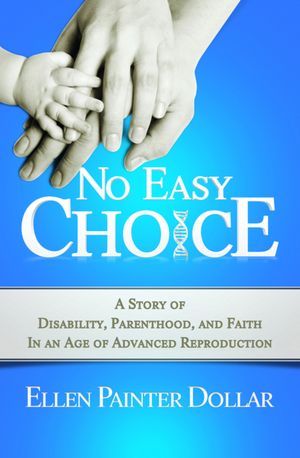 In June 2010, channel HBO2 aired a documentary titled Google Baby, about the growing practice of couples from developed countries—including the United States, Britain, and Israel—who hire Indian women to serve as surrogates for their IVF-conceived babies, often using donor sperm and/or donor eggs. Several Indian fertility clinics conduct every step of the process: They market their services to prospective clients (including travel services so that the parents-to-be can sightsee while they are in India to participate in an IVF cycle or retrieve their new baby); recruit surrogates, usually low-income Indian women with several children of their own; help clients obtain donor gametes when needed; perform IVF; house, feed, and provide medical care to surrogates for the entire length of their pregnancies; and deliver babies. As of this writing, the Indian government is considering more oversight of these practices, including separating the various steps so that the organizations matching parents with surrogates are not also performing IVF.

Google Baby made for troubling TV, and several scenes have stayed with me. In one scene, an Indian woman who recently gave birth to a baby destined for a foreign couple sits by her husband as he talks about his wife’s surrogacy. Their big-eyed, beautiful little boy—who appeared in a previous scene while visiting his pregnant mother as she lived apart from her family in a special house for surrogate mothers—plays nearby. The husband talks about the difference their surrogate payment has made, allowing them to buy a house and other comforts. He says he expects his wife will serve as a surrogate again in the future and adds that, although women’s brains are generally inferior to men’s, his wife made a good decision when she agreed to be a surrogate. The wife, who admitted in an earlier scene that handing the baby over right after birth was very painful, listens in silence.

In another disturbing exchange, an Israeli entrepreneur named Doron—who started a business of connecting egg donors, sperm donors, aspiring parents, and Indian clinics after becoming a parent through surrogacy himself—is on the phone, talking to a prospective father. Doron tells the client that the Indian clinic has suggested implanting two separate embryos in two different surrogates, to increase the chances of a successful pregnancy. This might mean that the client will end up with twins born of two different mothers. If either of the embryos divides into twins, or if several embryos are transferred into either woman and more than one implants, the client could even end up with three or four children. The client doesn’t hesitate to accept this plan, and amid chuckles over the idea of all those babies, mentions that selective reduction (aborting one or more embryos in a multiple pregnancy) has always been an acceptable option anyway. After hanging up, Doron mentions that he feels uncomfortable with this decision even though everyone else involved seems to be on board. But, he adds, maybe he just needs a little time to get used to the idea of using two surrogates.

Finally, in a scene I can’t put out of my mind, an Indian woman is on the operating table, giving birth to a baby via C-section. She says that she can feel the doctor cutting, and it becomes clear that her anesthesia is not working properly. The anesthesiologist puts something into her IV line, and soon she is lying still, awake but heavily sedated. One doctor standing by her head pushes hard on her belly over and over, as if he is kneading a particularly stubborn loaf of bread, while another doctor pulls the baby out. Immediately after delivering the baby, the doctor answers a cell-phone call while a clinic staff person wraps the baby and takes her away. The baby’s intended parents’ travel schedule will not bring them to India to pick up their baby for several days, so in the meantime, the staffer will care for the infant. The surrogate lies on a stretcher, her eyes dazed and vacant, as her husband holds her hand and strokes her hair.

That last scene hit me particularly hard because one of my C-sections also involved a failed epidural and the administration of drugs that did not completely abolish the pain, but helped me to mentally check out enough that I no longer cared. It was one of the more harrowing experiences of my life. But at least when it was over, I could see my husband holding a tiny yellow-hatted bundle, and knew that I had a baby whom I could soon hold and nurse. That Indian surrogate had no such solace. And the baby herself was adrift, in the temporary care of a professional until her parents arrived to claim the infant they had paid thousands of dollars for—although many fewer thousands than they would have paid for the same procedure in the U.S. or Europe. A baby had been born, an event that usually brings people together. But all of the parties involved ended up essentially alone, disconnected from each other and from the central event of a baby’s birth: The doctor takes a phone call, the surrogate woozily recovers from sedation, the intended parents make travel plans, and the baby is whisked away.

India is not the only destination for fertility tourism. The difference in compensation for American and British egg donors means that British women travel to the U.S. for IVF treatment, so they can gain access to the large pool of U.S. egg donors. Guatemalan women are being recruited as surrogate mothers in a small but growing industry, similar to that in India. Fertility tourism illustrates that while some fertility patients will do just about anything to fulfill their desire for a baby, they are not immune to cost considerations. If they can access the same services—donor gametes, IVF, surrogacy—at a lower price, then some of them will.

Oprah, among others, has labeled practices like these as inspiring stories of “women helping women”? What do you think? Is this a mutually beneficial practice for people with urgent needs—for Indian women who need a decent income, and couples unable to have their own children? Or is it exploitation?

December 12, 2012
Preparing a Way for God to Enter Our Busy Advent World
Next Post