This is the story I told at this past weekend’s inaugural Speak Up storytelling event in Hartford. In my next email newsletter, I will include a link to the Speak Up podcast, which includes my telling this story to a live audience (with considerable more humor than comes through in the written version), along with six other fabulous, funny, moving stories told by warm and witty storytellers. To add your name to my mailing list for very occasional newsletters (four or five per year), visit my web site and scroll down to the “Join My Email List” section on the right side of my home page.

So next weekend is Mother’s Day. Not my favorite holiday. Mostly, I think it’s yet another ploy to get us to buy stuff we don’t need with money we don’t have. Particularly when my children were younger and we were more strapped for cash, I knew I would struggle to enjoy a Mother’s Day gift because I would think too much about how much it cost and how I could have really used that money for something more practical.

Also, I come from a family where we tell each other precisely what we want for holidays and birthdays. I’m not talking about, “Oh, I could really use a new cardigan.” I’m talking about, “I’d like the 70% cashmere, 30% cotton cardigan on page 33 of the latest such-and-such catalog, size small, in the light gray heather, not the dark gray heather.” This means we rarely have to fake pleasure at an inappropriate gift or make returns. It also means I don’t particularly want gifts that I haven’t vetted myself.

Frankly, what I most want on Mother’s Day is that elusive pleasure of being alone in my own house. To me, being home alone is far superior to any spa day or dinner out. So usually, I ask my husband to take charge of the kids for a few hours and then bring home a pizza. Mother’s Day: check.

But one Mother’s Day, my family surprised me by giving me exactly what I needed, and it wasn’t going somewhere else and leaving me behind at home.

It was Mother’s Day 2006. My oldest daughter was six, my younger daughter was 2 1/2, and my son was just three months old. I was neck deep in the motherhood slog.

Beyond the usual exhaustion of juggling the needs of three children, a marriage, and a household, I was even more “unbecomingly pissed off” than usual that May morning. (I read an essay years ago in which a writer used that phrase to describe what she noticed about herself and many other mothers of young children. I have yet to find a better description of my private mood at that time in my life.)

You see, I was mothering these three children with the use of only one of my legs and neither of my arms much of the time, because I was using crutches after knee surgery. Back when I was eight months pregnant, I tore some cartilage in my knee. I have a genetic bone disorder that makes me prone to injuries like this one. I walked around on that painful knee for four more months, until I finally had surgery in early May. Although the surgeon gave me pamphlets that assured me I would be pain-free and crutchless within a few days, when Mother’s Day rolled around, I was still in pain and still using crutches.

Plus, my husband was scheduled to leave a few days after Mother’s Day for a business trip, to attend a conference in Phoenix. He and his colleagues had the brilliant idea of flying out a couple of days early to visit the Grand Canyon.

Do you see now why I awoke that day unbecomingly pissed off? My husband was about to leave for a trip to the Grand Canyon, while I couldn’t even shower effectively, not to mention keep three human beings alive and entertained. 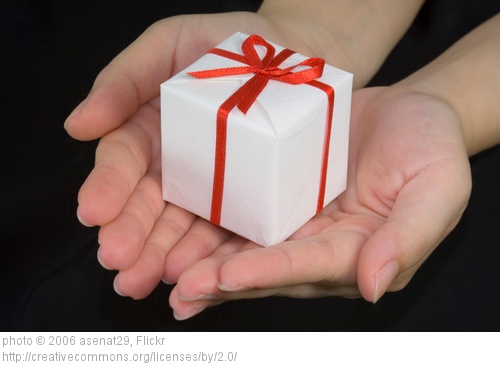 As I sat at the breakfast table that Mother’s Day, feeling sorry for myself, my family brought their gifts to me. My six-year-old gave me a project she made in her kindergarten class. On a pink piece of paper, she wrote the word “Mom,” with a bunch of lines coming out connecting to other words that she associated with me. There was “love,” of course, and references to my favorite things, like “blue” and “choclit.” One word, though, caused me to marvel at this little girl’s ability to get at the heart of what I treasure most. The word was “milk,” and was a reference to the fact that she had watched me feed her baby brother from my own body for the last three months.

For most of my life, my body has failed to do or be what I wanted. Nurturing my three babies through pregnancy and breastfeeding represents the first and only time in my life that my body has done exactly what I wanted and needed it to do. I know my daughter couldn’t have realized something so profound, but her choice to include the word “milk” on her Mother’s Day word map told me that, on some level, she saw me.

Then my husband approached, gift bag in hand. I was flummoxed. I did not recall giving him a numbered, detailed list of possible Mother’s Day gifts. I opened the bag to find a watch—one I still wear daily. It was golden and delicate, with a mother-of-pearl face. Being expensive, unasked-for, and unnecessary (I already owned a serviceable watch), it broke all of my gift-giving rules.

But it was the perfect gift. By giving me something of unnecessary beauty, without aid from my compulsive list-making, my husband was telling me that underneath the crabby, bandaged, limping mother distracted by how she was supposed to feed and care for her family with one leg and no arms, there still lived the clever, wise, fun person he married. The person who would see an unnecessary, beautiful gift as a thing of pleasure, not merely as a strain on the family budget.

The theme of tonight’s storytelling is beginnings. That Mother’s Day was the beginning of two things. First, my surgery that May, and the injury that required it, were the beginning of a life lived with chronic pain. Neither that knee or anything else has been the same since, and I have had to learn how to care for my family while honoring some painful and frustrating limitations. Although my body was far from perfect before then, I had enjoyed a respite of more than 20 years, from early adolescence until that knee injury, when I could largely pretend my bone disorder didn’t exist.

Second, that was the beginning of my learning to not just accept, but celebrate the mother and wife I am in spite of my very real limitations. There are certain images of mothers that are nearly iconic in our culture. There’s “The Bounce”—the way a mother will prop her child on her shoulder and walk around the house, bouncing up and down, to soothe a fussy baby. There’s “The Dangle”—a mother dangles an infant in a car seat over one arm, while holding a toddler’s hand (or outright carrying the toddler) in her other one. There’s “the Drape”—a mother picks up an exhausted preschooler, allowing him to drape his body over hers for the too-long walk back to the car.

I couldn’t (can’t) do any of these things. And yet, I am a good mother to my children. My ongoing struggle is to believe, even in the face of all I can’t do, that I am the best wife and mother for my family, simply because I am theirs.

May 2, 2013
Parents-to-Be Have More Choices Than Ever, But We Can't Choose Our Way Out of Pain
Next Post