Do I Love the Bible? It’s Complicated.

Christians like me, who lean left on political and social issues, are often accused of failing to honor the Bible as an authoritative source. As Derek Penwell noted in a recent Huffington Post piece (“The Problem with Assuming Liberal Christians Hate the Bible“), the opposite is often true. We lefties take the Bible very seriously, basing our views on such things as women’s roles in church and family, societal obligations to the poor, gun laws, and homosexuality on Biblical ideals, including radical acceptance and love, hospitality for the outsider, a broad definition of “family” that transcends biology, equality in Christ, and God’s love as the most powerful force in the universe. The reason that I think we Christians should focus more energy on issues around poverty than sexuality, for example, is that Jesus did.

To prove that we take the Bible seriously, left-leaning writers, such as Penwell in the above-mentioned post and popular blogger/author Rachel Held Evans, are fond of asserting, “I LOVE the Bible!”

Whenever I read such a declaration of love for scripture, no matter how heartfelt and authentic, I get a little squirmy. Because I’m not sure I can honestly say that I “love” the Bible.

Some parts of the Bible give me chills, because of how they communicate truth with indelible images and masterful poetry.

And as I was prophesying, there was a noise, a rattling sound, and the bones came together, bone to bone. I looked, and tendons and flesh appeared on them and skin covered them, but there was no breath in them. Then he said to me, “Prophesy to the breath; prophesy, son of man, and say to it, ‘This is what the Sovereign Lord says: Come, breath, from the four winds and breathe into these slain, that they may live.’” So I prophesied as he commanded me, and breath entered them; they came to life and stood up on their feet—a vast army.

I will give you a new heart and put a new spirit in you; I will remove from you your heart of stone and give you a heart of flesh.

But while he was still a long way off, his father saw him and was filled with compassion for him; he ran to his son, threw his arms around him and kissed him.

For I am convinced that neither death nor life, neither angels nor demons, neither the present nor the future, nor any powers, neither height nor depth, nor anything else in all creation, will be able to separate us from the love of God that is in Christ Jesus our Lord. 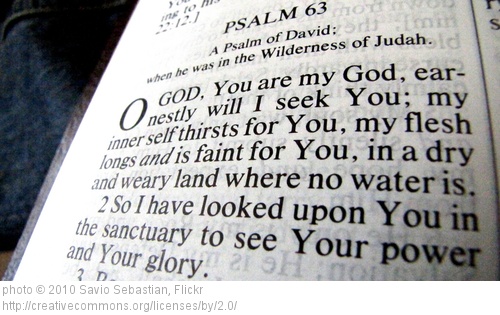 Some parts of the Bible comfort me, giving words to the prayers I cannot utter on my own and reminding me that our questions and struggles about and with God are neither new nor unique.

The psalms that admit to anger and despair, while clinging to the promises of God’s love, forgiveness, and care (Psalm 27: 13-14) –

I remain confident of this:
I will see the goodness of the Lord
in the land of the living.
Wait for the Lord;
be strong and take heart
and wait for the Lord.

Confessions that acknowledge how mixed up we are (Romans 7:18-19) –

For I have the desire to do what is good, but I cannot carry it out. For I do not do the good I want to do, but the evil I do not want to do—this I keep on doing.

Reminders that even Jesus’s closest friends messed up, really messed up, over and over again (John 18:25 – 27) –

Meanwhile, Simon Peter was still standing there warming himself. So they asked him, “You aren’t one of his disciples too, are you? He denied it, saying, “I am not.” One of the high priest’s servants, a relative of the man whose ear Peter had cut off, challenged him, “Didn’t I see you with him in the garden?” Again Peter denied it, and at that moment a rooster began to crow.

Some parts of the Bible leave me exasperated and confused, because they seem to contradict other scriptures, or are just plain hard to read.

The admonitions about women’s leadership in the church, juxtaposed with the vision of there being “neither male nor female” in Christ (1 Corinthians 14: 34-35  and Galatians 3:28) –

Women should remain silent in the churches. They are not allowed to speak, but must be in submission, as the law says. If they want to inquire about something, they should ask their own husbands at home; for it is disgraceful for a woman to speak in the church.

There is neither Jew nor Gentile, neither slave nor free, nor is there male and female, for you are all one in Christ Jesus.

Paul’s regular use of run-on sentences and inability to get to the point already, such as the opening verses of Romans. It takes a special, um, talent to apply such a convoluted overabundance of verbiage to a mere salutation:

Paul, a servant of Jesus Christ, called to be an apostle, separated unto the gospel of God, which he promised afore through his prophets in the holy scriptures,concerning his Son, who was born of the seed of David according to the flesh,who was declared to be the Son of God with power, according to the spirit of holiness, by the resurrection from the dead; even Jesus Christ our Lord, through whom we received grace and apostleship, unto obedience of faith among all the nations, for his name’s sake; among whom are ye also called to be Jesus Christ’s: To all that are in Rome, beloved of God, called to be saints: Grace to you and peace from God our Father and the Lord Jesus Christ.

Fundamentally, I believe the Bible is the primary narrative revealing what we as Christians believe about God, the world, and the people who inhabit it. The Bible tells me…

That God created the world and all creatures who dwell within it.

That love is God’s essential motivation.

That all people are made in God’s image.

That the earth and its riches are gifts of which we are stewards.

That God’s forgiveness is unlimited.

That Jesus Christ showed us how to live an abundant life characterized by love, hospitality, nonviolence, and forgiveness.

That everyone is welcome at God’s table.

That everyone sins and everyone can be forgiven.

That God gives particular attention to outsiders—children, women, the sick, prisoners, the poor—and so should we.

That love, light, and life are stronger than hatred, darkness, and death.

And so much more….

But while I love these truths and believe they are necessary for my life and the world’s healing, I find much of the Bible difficult to read—inaccessible, dull, contradictory—even if some favorite passages never fail to inspire or comfort. Do I love the Bible? Not if by “love” we’re talking about the eager anticipation of spending time in a pursuit that is unfailingly engaging and energizing. Not if we’re talking about the deep satisfaction of becoming utterly immersed in a story that portrays life so poignantly that it changes me from the inside out. I simply don’t love the Bible the way I love favorite books that I read over and over, never tiring even though I know the stories by heart—A Prayer for Owen Meany,  My Name is Asher Lev, The Stand, the Harry Potter series. The Bible is too full of contradictions, unanswered questions, and those awful run-on sentences for me to get lost in it the way I get lost in my favorite books.

But while favorite novels might (and often do) offer important insights about faith, grace, and pain, I ultimately end up back with the Bible, knowing that, while it may not always be the most gripping literature, it has a vital, primary role that no other book can match. I know that, while some favorite Bible passages engage me as fully as a masterfully written novel or poem does, the Bible’s less engaging bits still contain insights and perspectives that we need. I know that I need the Bible if I am to nurture a growing, substantial faith. I know that the Bible harbors layers of meaning and surprises that require a lifetime of careful reading to uncover.

My love of favorite books is a lot like the love of a teenager or twentysomething in his or her first truly serious relationship—exciting, consuming, intense, energizing. My love of the Bible is more like the love of a long-married couple—necessary, steady, committed, built on habit rather than adrenaline, and the source of occasional surprises, insights, and revelations if I am paying attention.

Do I love the Bible?

I guess I do, after all.

July 8, 2013
Resurrection Year: Learning to Live, and Thrive, with Life as It Is Given
Next Post