God in My Gut

Two Sundays ago, the rector of my Episcopal church handed out cards we can use to invite someone to church. In explaining how to use the cards, he said we shouldn’t try to figure out to whom we should give one. “Trust me,” he said, “the Spirit will bring someone to you.”

My response to this idea (in my head) was, “Fat chance.”

I wish I believed that Bob’s prediction of Holy Spirit intervention would come true. I wish I could pinpoint times in my life when the Holy Spirit has clearly led me to a person, place or action. But the truth is that I have no experience with a clear movement of the Spirit. No experience of God speaking to me in any obvious way. I know people who say they’ve had such experiences, who have received God’s direction in a voice that was not exactly audible but was nonetheless absolutely real and clear, or in a dream that provided obvious direction for a step they needed to take (as in, the street address of a building they needed to go to).

If you’re familiar with me or my writing, you might be wondering how I can say that I’ve never gotten clear direction from God. I have written, many times, that God has called me to both motherhood and writing. How can I be certain of God’s call if I’ve never heard God’s voice, never noted the sure movement of the Spirit in my life?

Well, first of all, I’m not certain. I think that God has called me to my work as a mother and as a writer. But I could be wrong. For much of my early life, until college graduation, I believed I would work in the medical field, based on my extensive experience as a patient and love of biological science. But when I graduated from college, instead of going on to medical school, I got a job in the social services, largely because I disliked the lab portion of college science classes and therefore took fewer of those courses than I needed to apply to med school. It’s quite possible that God actually called me to medicine, not writing, and I ignored that call because I didn’t want to spend my Friday afternoons in the college biology lab.

My sense of being called to motherhood and writing (and any sense I’ve had of God being active in my life) has come entirely from that mishmash of experience, desire, common sense, and observation that we call “gut feeling.” If God has been present to me at all in a concrete way, God has been in my gut. And because my gut is informed as much by my faults and prejudices as by my gifts and wisdom, I follow my gut’s guidance with some trepidation, certain that sometimes, I am sanctifying guidance that comes from my own messed-up thinking, not God.

But if God isn’t going to speak to me with a voice or in a dream or the clear movement of the Spirit, my gut is all I’ve got.

In an email conversation last week, a friend lamented that she has never experienced God directly. She experiences God largely in community, through friendships, and given that she’s currently living a very isolated and isolating life in a place that doesn’t feel like home, God is absent. That’s how it feels to her, anyway. She was contemplating major decisions that will significantly disrupt her family’s life but also promise healing. Her gut is telling her these decisions are the right ones, she said, but she added that her gut is usually wrong. I and another friend, however, said our guts are also saying that these decisions need to be made. We decided we would invoke a revised version of Mathew 18:20 (“Wherever two or three are gathered in my name, I am in the midst of them”): Wherever two or three guts concur…..

Maybe someday God will speak to me in a way that’s obvious. In the meantime, the only way I know to seek God’s guidance is to pay attention to my gut and to continue showing up—going to church, being faithful to my primary communities, praying. Honestly? I feel like I’m faking it, this faith thing. People sometimes assume my faith is particularly strong because I write about it. It’s not. I claim the label “Christian” because the Christian story and its preposterous claims about a God who is strong in weakness, shines light in darkness, and brings life from death, a God who uses weak-willed, misguided, scared, confused people like me to do holy work—this story and its absurd promises are the only things keeping me from losing my mind and my hope in a world so full of pain.

I put my “invitation to church” card in my purse. How will I know when to pull it out and give it to someone? I guess my gut will tell me so, and the rest is up to God.

April 30, 2016
Consider the Birds: What happens to a writer (this writer) when words fail
Next Post

Progressive Christian
Spotlight: A Film About Devotion to Truth, the...
Ellen Painter Dollar 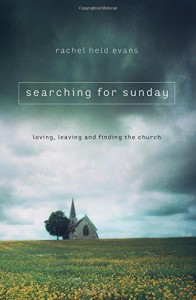